You are here: Home › The Folded Flag Foundation: Vegas nonprofit provides scholarship to families of the fallen

The Folded Flag Foundation: Vegas nonprofit provides scholarship to families of the fallen 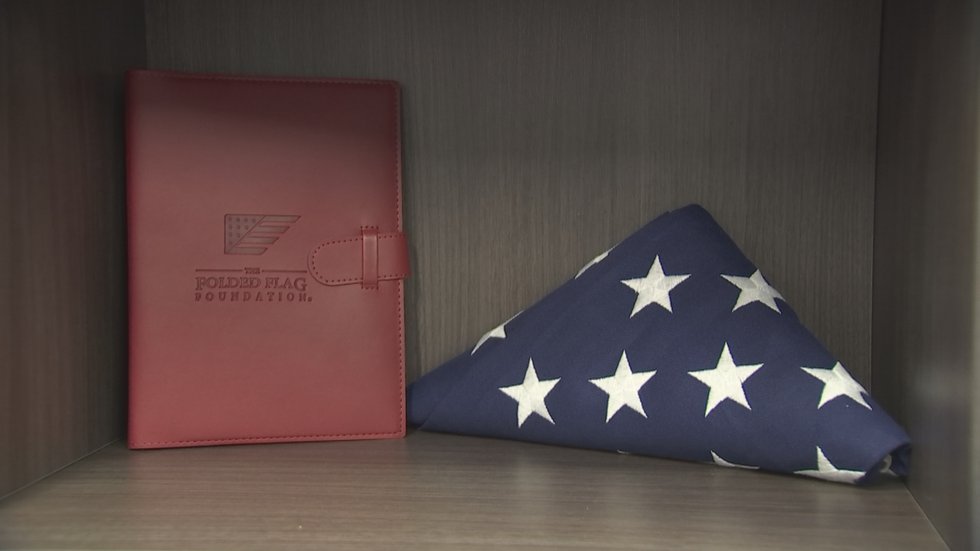 LAS VEGAS, Nev. (FOX5) - For many of us, Memorial Day marks the unofficial start of summer but for some families it is a day filled with emotions. Gold Star families are families who have lost a loved one: a husband, a dad, a mom, a son, in service to our country. The Folded Flag Foundation, a Vegas based nonprofit organization founded by Vegas Golden Knights owner and Air Force Veteran Bill Foley, helps the loved one of those who have paid the ultimate price serving our country by awarding scholarships.

Wednesday, March 18, 2022, marked 10 years since Abby Knapp Morris of Las Vegas lost her husband Sgt. Mike Knapp and she went to Arlington National Cemetery to spend the day with him. She sat at his headstone and placed pictures against it.

“I am just trying to focus on all of the amazing time that Mike and I did have together,” Abby shared. Mike joined the army at 18 right out of high school and served in Kosovo and Iraq. Three months before being deployed to Afghanistan for Operation Enduring Freedom, his daughter Kinsley was born.

Six months later, Abby and Kinsley flew to Kansas City to meet family before a two-week family vacation to Orlando.

“Pulled up to my parents’ house and I saw one car in the cul-de-sac, and I saw the license plate and I just knew, and I ran in the house and they were there, and it is the two people you never want to see,” recalled Abby.

On what was supposed to be his last day in Afghanistan, the 28-year-old father was killed in an explosion.

“He was the only one out at the cannon that morning making sure everything was sighted when the explosion happened,” Abby explained. Enemy forces attacked his unit also killing Sgt. Jabraun Knox and three civilians.

Abby was now a single mom of a 9-month-old.

“That first year I was just a mess. I was just a disaster. I didn’t know what to do. I had a crying little baby and would just battle through the nights trying to figure out what was going to be next for me because Mike and I had our lives planned out together,” Abby said.

In the years that have passed, Abby has found an unexpected second family: other Gold Star wives and children. It is a community she never wanted to be a part of, but it now helps her thrive.

“Nobody else can bond with us like that. We just get to be real because sometimes we are just so upset and sometimes, we’ve just got all these things on our plate that we are trying to juggle,” Abby explained.

The Folded Flag Foundation based in Las Vegas aims to ease the struggles of Gold Star families.

Twenty-four of those scholarships were awarded in Nevada including to Kinsley.

“Since kindergarten she has gone to Calvary Chapel and they have paid her full tuition. We don’t have to worry about that. They will cover her books and her uniforms, and it is just such a relief as a mom,” said Abby.

Children of servicemen and women killed in combat can have their college education paid for by the government, but the Folded Flag Foundation provides for much more.

Folded Flag hopes to provides a pathway to brighter future for kids like Kinsley who has grown up with only pictures of her father and his folded flag.

“I hear so many stories and it makes me very happy, and it also makes me sad because I miss him,” Kinsley said.

“When a family becomes a Gold Star family and they are handed their folded flag, that is the worst day in their life,” Hamilton contended.

Freedom is not free. The cost paid by those who have died in service and the families left behind.

“I keep hearing the 21-gun salute. I have actually heard it three times since I have been here this morning and every time my heart is just heavy with the memories,” Abby added.

“I am so thankful for every memory and every moment he gave us,” Abby said.

Folded Flag Foundation provides for its own administration costs, so every dollar donated goes back to a Gold Star family. You can learn more at foldedflagfoundation.org

Related Questions and Answer about "The Folded Flag Foundation: Vegas nonprofit provides scholarship to families of the fallen"

What is the flag for a fallen firefighter?

Black and Purple mourning colors adorn this flag along with a Maltese Cross. Typically flown to honor a fallen firefighter.

What is the National Fallen Firefighters Foundation?

The United States Congress created the National Fallen Firefighters Foundation to lead a nationwide effort to remember America's fallen firefighters. Since 1992, the tax-exempt, nonprofit Foundation has developed and expanded programs to honor our fallen fire heroes and assist their families and co-workers.

Is the Obama Foundation a nonprofit?

The Barack Obama Foundation is registered as a 501(c)(3) non-profit organization.

Is the National Kidney Foundation nonprofit?

The National Kidney Foundation, a major voluntary nonprofit health organization, is dedicated to preventing kidney disease, improving the health and well-being of individuals and families affected by kidney disease and increasing the availability of kidneys for transplantation.

Is the California Wellness Foundation nonprofit?

Our foundation was established when Health Net, one of the state's largest health care and insurance providers, converted from nonprofit to for-profit status.

Is Orangewood Foundation a nonprofit?

Orangewood Foundation is a 501(c)(3) nonprofit (Fed'l tax ID #95-3616628) and one of the leading providers of services to youth in Orange County. We help almost 2,000 youth annually prepare for independent adulthood.

Is Wikimedia Foundation a nonprofit?

As a 501(c)(3) nonprofit public charity, the Wikimedia Foundation may receive tax-deductible donations in the United States. Learn more about tax deductibility in other countries.Oct 25, 2021

What is the record of most folded paper?

Such 'geometric growth' effects are dramatic: in theory, 26 folds would make the paper thicker than the height of Mount Everest. The current world paper-folding record belongs to California high school student Britney Gallivan, who in 2002 managed to fold a 1.2km-long piece of tissue paper 12 times.

Is Oregon Community Foundation a nonprofit?

The Oregon Community Foundation is a 501(c)(3) organization, with an IRS ruling year of 1973, and donations are tax-deductible.

What is the name of the scholarship that Bayer provides?

The Jeff Schell Scholarship, funded by Bayer, provides this experience by supporting students and graduates in international research exchanges.