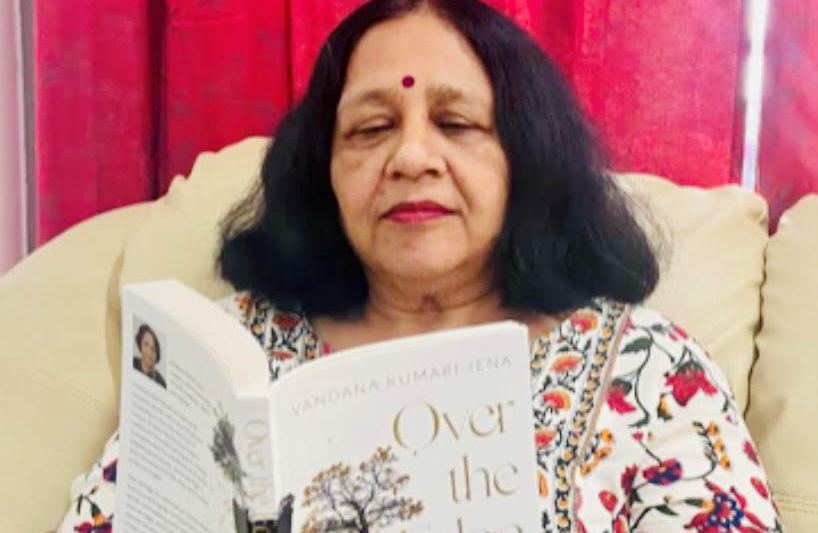 Finally, Vandana Kumari Jena came up with her wonderful book Over the Edge in her years of superannuation. At the time when women are marching hand in hand with men in every walk of life then literature too is no longer a cup only of men. Few names in India are also notable such as Jhumpa Lahiri, Anita Nair, Chitra Banerjee Divakaruni, Meena Kandasamy, Arundhati Roy, and Kiran Desai who were fiery women against institution and administrative authority. But like Bengali IAS author Anita Agnihotri who came from IAS 1980 batch, Vandana Kumari Jena of Orissa was in IAS batch 1979 and she too came directly from administration to literature and carried both equally on her able shoulder.

She was the second woman officer to be posted to Manipur and the first outsider woman in the Northeast where she won the heart of the people and gained her experiences in her fiction and non-fiction. Those were turbulent times when insurgency was rampant in Manipur. Vandana Jena was posted in insurgency-prone districts of Ukhrul and Churachandpur in Manipur. At present, she is actively associated with Prayas, a leading NGO headed by Amod Kanth, ex-Director General of Police, Arunachal Pradesh.

Her brief stint as Vice-Chancellor Berhampur University, which she held in addition to her charge as Revenue Divisional Commissioner, is one of her most cherished postings, which influenced her so deeply that she wrote a novel about it called `Clueless,’ where the Vice-Chancellor of the University got murdered.

Later she had to oversee the Naxal affected districts of Gajapati, Raigarh, Koraput and Malkangiri, among others. These stints broadened her horizons and gave her a new perspective. But in the midst of all these her eclectic reading of literature continued and she wrote nearly 200 articles in the national dailies and continued to do so for the next 20 years.

She grew up in a very enabling environment and was deeply influenced by her parents. Her father Dr. Santosh Kumar taught Philosophy at the University of Delhi where he retired as a Professor and her mother  Dr. Padma Srivastava taught Political Science at Daulat Ram College at Delhi University where she retired as a Reader.

From her childhood itself, Vandana saw the importance of being given to education. She was a voracious reader as she always found herself surrounded by books. As a youngster, she loved reading Enid Blyton, Nancy Drew, Hardy Boys, Agatha Christie and Perry Mason. But as she grew older she was greatly influenced by Ayn Rand and her philosophy. She was deeply influenced by the character and philosophy of Howard Roark in The Fountainhead. She stood first in school in the ICSE examination in 1972.

She passed her Political Science Honours in First Class in 1975 from Indraprastha College in Delhi University and stood first in college and second in the University. During her stint as an IAS officer, she was awarded a Colombo Plan scholarship in 1992 to do her Masters in Development Administration from the University of Birmingham, where she stood first.

She received the Birmingham Chambers of Commerce award for standing first in the Examinations. Her mother, who won a ‘scholarship’ to do a Diploma in International Studies in Den Hague in the Netherlands in 1964, was the biggest influence in her life.

Her sixth book was the novel Clueless published in 2019. In 2022 “Over the Edge,” came out as a short story collection.  She also edited two books on Literacy titled Innovations in Literacy which was presented to the Vice-President of India Shri Bhairon Singh Shekhawat in 2006, and Jan Shikshan Sansthans’ Promise and Performance which was presented to the President of India Smt. Pratibha Patil in 2007. She also co-edited a book `Leading the Way,’ along with Dr. Anthony Mathew.

She spent almost her entire career in the social sector and worked in the fields of education, health, women and child development and youth development which enriched her experiences as a writer. She was instrumental in drafting the Chapter on Women’s Agency and Child Rights in the 12thFive Year Plan document.

All these shaped her as a writer no less and she considers herself a feminist in a broader sense. It is a remarkable feat for any woman in the administrative services that her short stories have appeared in 25 anthologies.

She has seen poverty and deprivation, violence and insurgency, crime against women and the efforts for their rehabilitation. She has seen the dilemmas women face and the informed choices they make. Much of it is reflected in her writings.

She retired as Secretary to the Department of Land Resources, Ministry of Rural Development in 2015.  She is widowed with two sons. At present, she lives in Mumbai with her younger son and daughter-in-law. She will remain a fountain of positive motivation for all women with literary bent of mind fighting for a cause.

Dr. Ratan Bhattacharjee is a writer and poet. He may be reached at: [email protected]

Is Cheltenham Literary festival still on?

Director's welcome. For book lovers everywhere, The Times and The Sunday Times Cheltenham Literature Festival is the only place to be each autumn. The Festival returns from 7-16 October 2022, welcoming the world's greatest writers and thinkers to Cheltenham.

Literary fiction is a category of novels that emphasize style, character, and theme over plot. Lit fic is often defined in contrast to genre fiction and commercial fiction, which involve certain tropes and expectations for the storyline; literary fiction has no such plot-based hallmarks.Nov 15, 2021

What is University of Jena known for?

Jena University is one of the founder of The German Centre for Integrative Biodiversity Research (iDiv) Halle-Jena-Leipzig, that was founded in 2013. It is a research centre of the German Research Foundation (DFG).

What is journey time?

Journey Through Time will hit the road in February 2019 for the first time, celebrating the band's legendary catalog and rich history. Returning to their roots, the band will showcase songs from the very beginning – plus pay tribute to your favorite classic hits.

At the most basic level, the difference between these two roles is that a Network Administrator oversees the network (a group of computers connected together), while a System Administrator is in charge of the computer systems – all the parts that make a computer function.

What is literary imagination?

Literary Imagination is a forum for all those interested in the distinctive nature, uses, and pleasures of literature, from ancient to modern, in all languages.

What are literary festivals?

A literary festival, also known as a book festival or writers' festival, is a regular gathering of writers and readers, typically on an annual basis in a particular city.

What is literary intersectionality?

ABOUT. Kimberle Crenshaw (1989) coined the term “intersectionality” to offer a framework for understanding how discrimination stems not just from a single form of oppression (i.e., racism or sexism), but from multiple forms of oppression simultaneously.

When was Sentimental Journey made?

"Sentimental Journey" is a popular song, published in 1944. The music was written by Les Brown and Ben Homer, and the lyrics were written by Bud Green.