You are here: Home › The W in Designer: Flyest Fits of the Week (IV) - WNBA.com - Official Site of the WNBA

The W in Designer: Flyest Fits of the Week (IV) - WNBA.com - Official Site of the WNBA

The athletes that represent the W are as righteous as anyone in the world of sports and thus are utilizing their attire in order to push for change in our society.

With players and fans quickly adjusting to the 2022 season, fashion is becoming a more significant opportunity for sparking pivotal pre-game conversations. There’s a solid push to #FreeBG, and several teams are organizing game days where everyone takes a united front by wearing Brittney Griner merchandise. Every week, we see outfits that coordinate with each player’s personal news or widespread issues that concern the entire league.

In the fourth edition of the “The W in Designer: Flyest Fits of the Week,” players are elevating sportswear into expressive outfits that capture what’s on their minds. Some players are teaming up with rising stylists and independent designers to craft looks that speak to their personalities and personal journeys. Other players are making bold references to important issues and inspiring cultural icons, which reminds fans that players have much more depth than what’s revealed on-court. 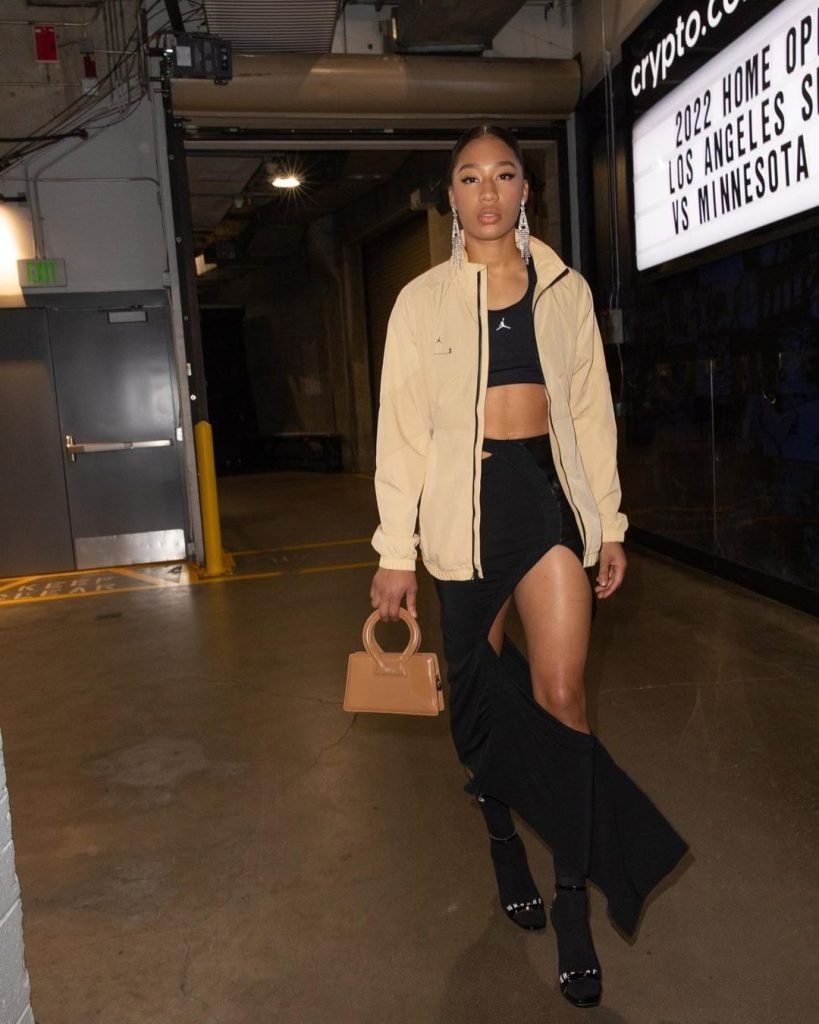 When she’s not playing for the Minnesota Lynx, Aerial Powers explores emerging technologies like vlogging, video game streaming, and working as a Coinbase ambassador. Her fashion tastes are equally cutting edge, as reflected in her custom outfit by Raul Lopez of Luar. Styled by Kyle Luu, Powers wears a classic Jordan Sports Bra with a custom skirt that features dramatic cut-outs to show off her athletic physique. Jordan Crew Socks reinforce the mix of sporty and chic with heels, a Jordan jacket, sparkly “A” earrings, and a highly coveted Luar Ana Bag. DeWanna Bonner has recently returned to the Connecticut Sun after playing overseas in Turkey. Regardless of her team’s location, she’s a powerful force using her platform to amplify Brittney Griner’s wrongful detainment in Russia. Coordinating with her teammates, Bonner rocks a customized Brittney Griner hoodie with the player’s portrait, jersey number, and a heart-shaped rendition of the Phoenix Mercury’s logo. To keep the attention on rallying fans to #FreeBG, she styles her hoodie with incognito pieces like black biker shorts and Black Stocking Sneaker Boots from Rick Owens. 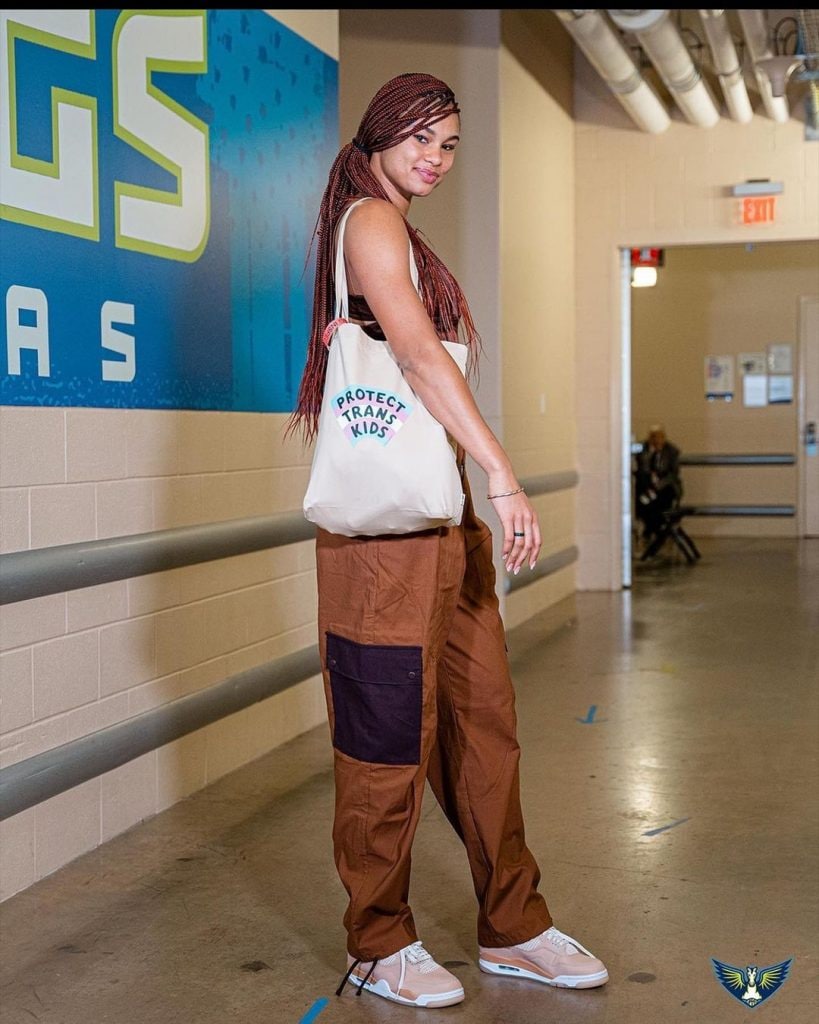 Satou Sabally, a 2021 WNBA All-Star is showing that she is an All-Star both on and off the court as she utilizes her pre-game outfits to uplift causes close to her heart. Her outfit is designed to enhance the athlete’s natural player swag while showing off her Protect Trans Kids Tote Bag by non-binary artist and activist MegEmikoArt. Sabally also wears Pecan-colored Women’s Utility Pants from Jordan Essentials, which are loosely tied at the bottom for a flattering fit. A pair of Air Jordan 4 “Shimmer” sneakers ties her look together, which feels aesthetically pleasing for its variety of warm-toned colors. 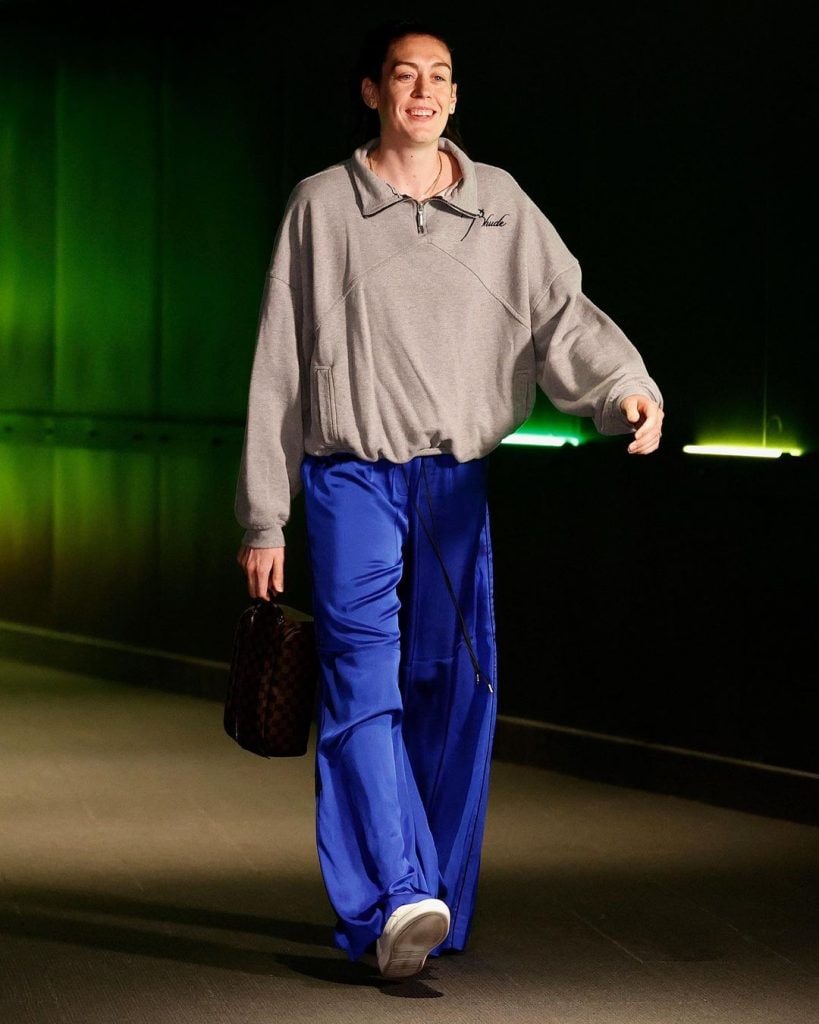 Breanna Stewart takes advantage of her tall silhouette by wearing lots of draping fabric while showing up to her game with the Seattle Storm. Stewart wears an Embroidered Quarter-Zip Sweater from RHUDE, bringing edgy, cosmopolitan style to the Pacific Northwest. To add some contrast to her neutral-colored top, she wears bright blue pants with a soft, silky finish and delicate black details on its side and drawstring. Since her clothes have a voluminous visual effect, the player keeps her accessories simple with white sneakers, a Louis Vuitton Pouch, and thin gold jewelry. 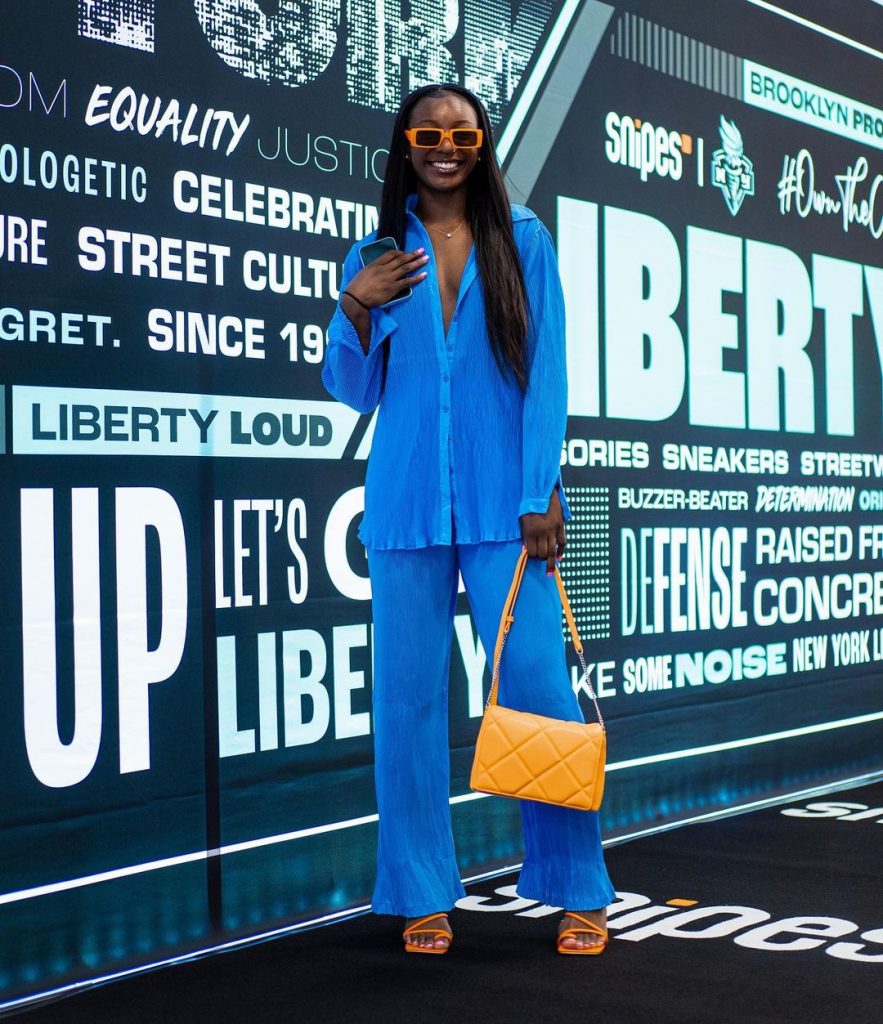 Named 2021’s WNBA Rookie of the Year as a member of the New York Liberty, Michaela Onyenwere has worked with stylist Sydney Bordonaro to create this dressed-up look. The contrasting combination of blue and orange is extra fun in New York because it can also be interpreted as referencing the Knicks’ team colors. Bordonaro says that Onyenwere’s suit is from PrettyLittleThing and her orange heels are from SHEIN, which proves that style is about being able to ball out on any budget. To match her heels, the player also wears square-shaped orange sunglasses and an orange leather bag. 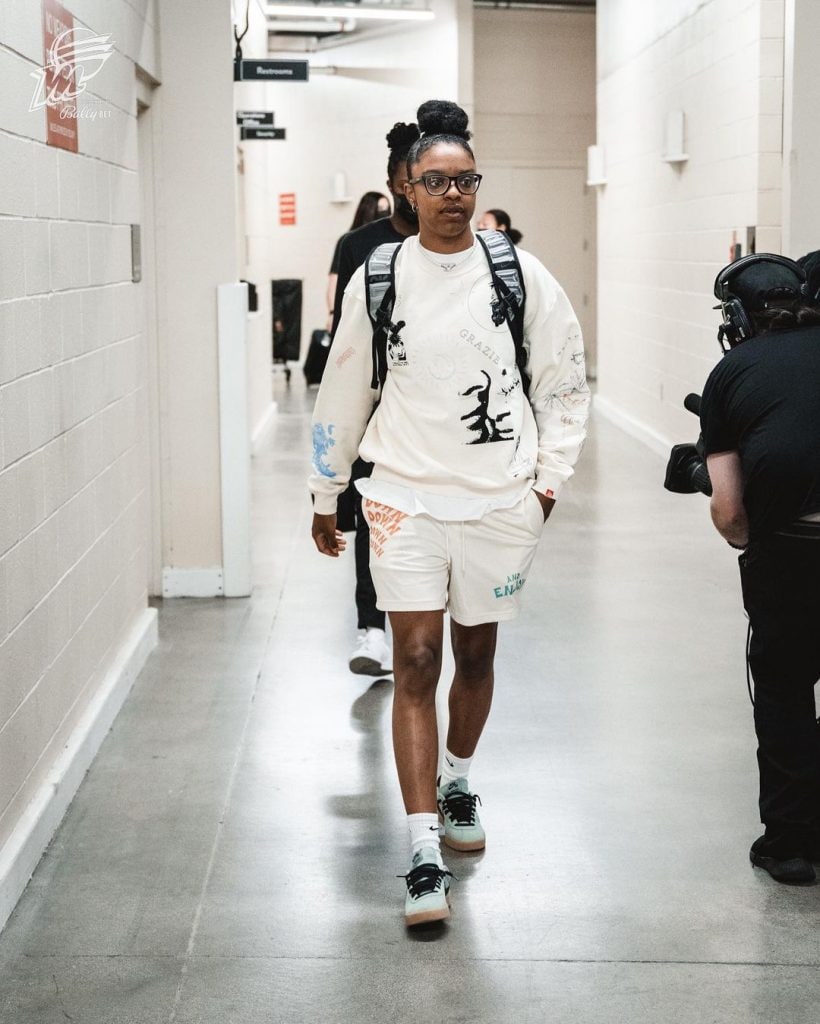 Diamond DeShields has recently let the world learn more about her difficult journey after recovering from an intensive surgery to remove a spinal tumor. A comeback for the ages, Diamond’s piggybacked off her Championship season with the Sky with a scoring outburst over the past week with the Mercury. This past week, her on-court game has translated off the court, with a flurry of fire fits. DeShields was spotted in a Test Print Sweater and matching shorts by Jungles Jungles, an Australia-based streetwear brand. She also wears classic Nike Crew socks and a pair of Nike SB Dunk Low Pro sneakers in a “Horizon Green” color. While arriving at her game with the Las Vegas Aces, Kelsey Plum wears her game-day manifesto on her back with her bold Tupac Me Against The World Tee. Plum also works with stylist Sydney Bordonaro, but this outfit feels very true to the player’s tough and fun-loving on-court persona. Her pants are a pair of Black Panel Contrast Stitch Flared Biker Pants from PrettyLittleThing, another affordable option that seems like it could be designer. To add extra hype to Plum’s look, the player wears a rare pair of Nike x Off-White Dunk Low “Lot 05 of 50” sneakers.

Newly hired WNBA reporter Kirsten Chen writes a lifestyle & fashion column on WNBA.com throughout the season and can be reached on Twitter through @hotgothwriter. The views on this page do not necessarily reflect the views of the WNBA or its clubs.

Related Questions and Answer about "The W in Designer: Flyest Fits of the Week (IV) - WNBA.com - Official Site of the WNBA"

What's the max contract in the WNBA?

But entering the new season, which begins on May 6, who earns the distinction of being the league's most expensive player? Along with Mercury icon Diana Taurasi, two additional ballers are locked into the WNBA's max salary, exactly $228,094 for the year.

Who owns the Liberty WNBA?

NEW YORK -- An investment group led by Brooklyn Nets minority owner Joseph Tsai has bought the New York Liberty. The WNBA announced the sale Wednesday. Tsai is co-founder of the Alibaba Group, the Chinese e-commerce giant. He bought a 49 percent interest in the Nets in April.

Will Paige Bueckers play in the WNBA?

Bueckers is a college basketball player and was born on Oct. 20, 2001. She will be 21 in the 2022 calendar year and is therefore not eligible, no matter how well she plays during her sophomore season at Connecticut. Bueckers could declare early for the 2023 WNBA Draft if she wishes.

Is Brittney Griner still in the WNBA?

Griner, who faces up to 10 years in a Russian prison, arrived in Moscow in February to play for the Russian basketball team, UMMC Yekaterinburg, where she has played since 2016 during every WNBA offseason.2 days ago

Why don't they dunk in the WNBA?

By reducing the height of the rim, to 9-feet rather than 10-feet, more WNBA players would be able to dunk on the rim. WNBA players are already the best female basketball players in the world and the reduction in rim height would benefit the league by allowing more players to reach the rim and complete a dunk.

Why was the WNBA player in Russia?

Why is she being detained? Officials in Russia said they detained Griner after finding vape cartridges that contained hashish oil in her luggage. The officials said a criminal case has been opened into the large-scale transportation of drugs, which can carry a sentence of up to 10 years.2 days ago

Who wears number 7 in the WNBA?

What is the lowest salary in the WNBA?

Who has the largest wingspan in the WNBA?

Who's the highest paid WNBA player?