You are here: Home › Colin Kaepernick works out for Raiders in first NFL action since 2016 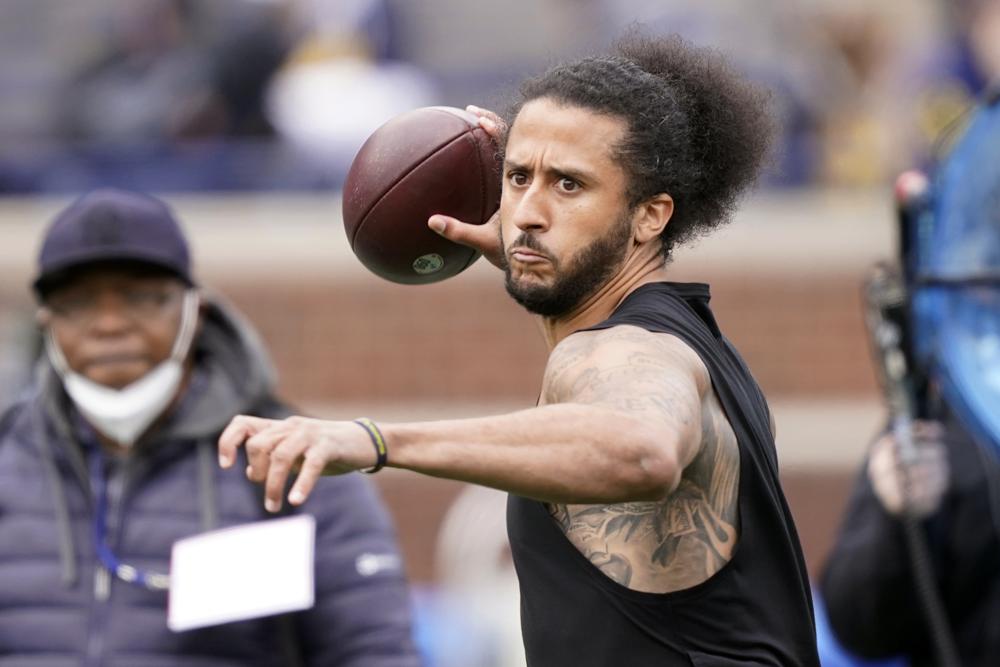 Listen to this article here

Colin Kaepernick, who last played professional football in 2016 — the year he knelt during the national anthem to protest racial injustice — worked out Wednesday for the Las Vegas Raiders, a league source told ESPN.

It was Kaepernick’s first workout with an NFL team since being exiled, and it was also the first time the former star quarterback visited with a team since meeting with the Seattle Seahawks in May 2017, before they passed on the opportunity to sign him. During that meeting, Kaepernick reportedly didn’t perform any football related activities and was seen by many as a sham interview.

Colin Kaepernick should be in the NFL. Duh.

Years before he was a Super Bowl appearing QB, Colin Kaepernick played at the University of Nevada, Reno, the only school to offer him a scholarship. Currently, the Las Vegas Raiders are the only NFL team that has given him another opportunity since 2016.

In 2019, Kaepernick hosted a botched workout session outside of Atlanta, Georgia, which turned off many already reluctant team scouts and personnel, but the opportunity yesterday may reflect a changing of minds in league ownership.

Per ESPN, Raiders owner Mark Davis is following in the spirit of his late father, Al Davis, who provided many opportunities, such as hiring the NFL’s first Black head coach (Art Shell) and its first woman chief executive (Amy Trask) in the modern era. The elder Davis also was the first team owner to draft a Black quarterback (Eldridge Dickey) in the first round and the second team owner to hire a Hispanic head coach, Tom Flores.

Also considering the controversy-plagued year the Las Vegas Raiders had in 2021, perhaps they feel well-equipped to bring Kaepernick in and handle whatever criticism will surely follow.

If not the Raiders, then who?

Kaepernick calls out NFL on their slogans.

Colin Kaepernick recently stated on an “I Am Athlete” interview that today’s NFL should be more “in alignment” with his social views, given the league’s stance on other matters pertaining to race relations in the United States.

You have ‘End Racism’ in the back of your end zone. You have ‘Black Lives Matter’ on your helmet. Everything I’ve said should be in alignment with what you’re saying publicly,” he said. “It’s a $16 billion business. When I first took a knee, my jersey went to No. 1. When I did the deal with Nike, their value increased by $6 billion. Six billion. With a B.”

Is Colin Kaepernick allowed in the NFL?

He went unsigned in the following offseason, and has since been steadily working toward finding employment in the league. Kaepernick drew renewed interest in his services in the summer of 2020 when the NFL expressed it would welcome Kaepernick back, but left the decision up to its member clubs to sign him.

Can Colin Kaepernick still play in the NFL?

The year following his polarizing protests, Kaepernick opted out of his contract with the San Francisco 49ers. Since then, he has been unable to sign with any NFL team.

How did Colin Kaepernick affect the NFL?

Of course, Kaepernick has done more than merely rebel. He's expanded the scope of protest. By the start of the 2016 NFL season, Kaepernick had captured the country's attention by kneeling during the national anthem to point up police brutality and the impunity often enjoyed by the officers who inflict that violence.

Is Colin Kaepernick coming back to the NFL?

Colin Kaepernick will be staying in San Francisco through 2020 after signing a six-year contract extension.

Does Colin Kaepernick have siblings?

Colin in Black x26amp; White gives a closer look into the Kaepernick family, which is headlined by Rick and Teresa Kaepernick, his adoptive parents, and his siblings, Kyle Kaepernick and Devon Kaepernick, who have all been supportive of his stance against police brutality against black people in America.Dec 2, 2021

Does Netflix have Colin Kaepernick?

Colin Kaepernick: Netflix drama follows the birth of a protest figurehead. When American football star Colin Kaepernick took the knee during a national anthem, he became an overnight symbol of the protest and division over race in the US.

Who is Colin Kaepernick biography?

Colin Kaepernick was born in Milwaukee, Wisconsin, in 1987. An athletic and mobile quarterback, Kaepernick attended the University of Nevada, Reno, where he set several school and college records. The San Francisco 49ers drafted Kaepernick in 2011, and he led the club to Super Bowl XLVII less than two years later.Dec 6, 2017

How was Colin Kaepernick childhood?

Childhood x26amp; Early Lifenn He was five weeks old when he was adopted by Rick and Teresa Kaepernick, a white couple. Through them, he has a brother, Kyle, and a sister, Devon. He spent the early years of his childhood in Fond du Lac, Wisconsin, before moving to Turlock, California with his family when he was four.