You are here: Home › Colin Kaepernick works out with Raiders as door opens for potential NFL comeback 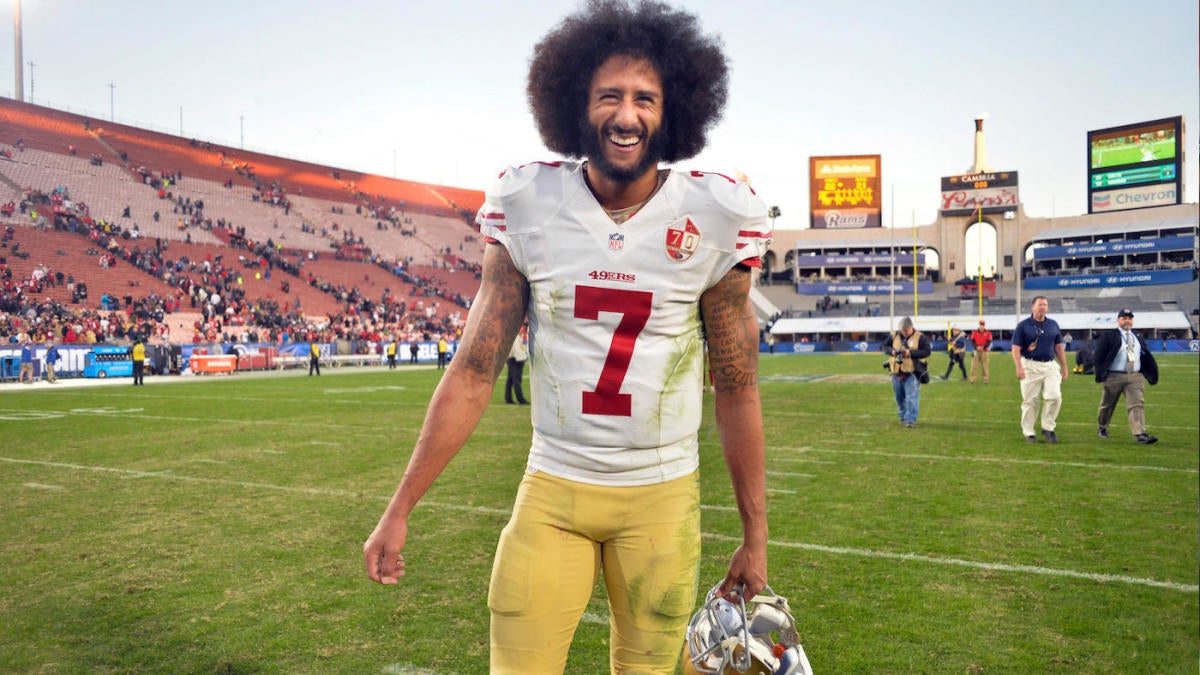 Colin Kaepernick, who has not played in the NFL since New Year's Day 2017, has taken a step towards returning to football. The former NFL quarterback successfully completed a workout for the Las Vegas Raiders on Wednesday, per NFL Network. The workout occurred at the team facility with head coach Josh McDaniels and general manager Dave Ziegler in attendance.

The 34-year-old hasn't worked out for any team or visited with any team since finishing out the 2016 season. The social justice advocate generated national controversy due to on-field protests of police brutality, and it's something that is generally believed to have ended his career. However, that may not be the case after CBS Sports NFL Insider Josina Anderson reported Wednesday that the Raiders were bringing Kaepernick in.

Kaepernick starred at Nevada, the only school to offer him a scholarship, before the San Francisco 49ers selected him with a second-round pick (36th overall) in the 2011 NFL Draft.

Kaepernick, a California native, went 28-30 as a starter during his time with the 49ers, throwing 72 touchdowns and 30 interceptions in 69 career games. He led the 49ers to an appearance in Super Bowl XLVII to end the 2012 season and went 12-4 in 2013, but San Francisco struggled in his final three seasons there, including going 1-10 in his starts during his final campaign in 2016.

Still, some of his career statistics are impressive. Only 1.77% of Kaepernick's passes have been intercepted, which is the fifth-best mark in NFL history among those to attempt at least 1,500 career passes. He also rushed for 181 yards in a playoff win against the Green Bay Packers in 2013, which are still the most ever by a quarterback in a postseason game.

Crafted By The Best NFL Experts

Get the day's big stories + fun stuff you love like mock drafts, picks and power rankings.

By submitting my email I agree to receive the "Pick Six Newsletter" and other marketing and promotional emails from CBS Sports, which may include information from our affiliates and/or partners' offers, products and services. For more information about our data practices consult our Privacy Policy

Thanks for signing up!

Keep an eye on your inbox.

There was an error processing your subscription.

Kaepernick has been busy this offseason proving to the football world that he still has tread left on the tires, and has said that he's open to being a backup. Most recently, he served as the honorary captain at the University of Michigan's spring game, and had a public throwing session at "halftime," which was broadcasted on television. Kap also worked out with Seattle Seahawks wide receiver Tyler Lockett, and reached out to head coach Pete Carroll to gauge Seattle's interest in bringing him in.

When asked what he hoped to accomplish with the public workout at Michigan, Kaepernick said he's just looking for a chance.

"A shot," Kaepernick responded. "Just a chance, an opportunity. You know, a lot of what we've heard is, 'Oh you haven't played in five years, can you still play?' Well, I had to come out, it's part of the reason we've been doing all of the workouts publicly, releasing them publicly.

"(I'm) grateful that this is an opportunity that can lead to a next step and hopefully crack that door open so I can run through it."

The Raiders are not one of the more quarterback-needy teams in the NFL. Derek Carr signed a huge three-year extension worth $121.5 million this offseason, and Vegas also signed Nick Mullens, traded for Jarrett Stidham and picked up Cal's Chase Garbers as an undrafted free agent. Still, the Raiders are clearly interested in adding a veteran. A workout does not guarantee the Raiders will sign Kaepernick, but this is a very big development for a potential return to the NFL.

How did Colin Kaepernick affect the NFL?

Of course, Kaepernick has done more than merely rebel. He's expanded the scope of protest. By the start of the 2016 NFL season, Kaepernick had captured the country's attention by kneeling during the national anthem to point up police brutality and the impunity often enjoyed by the officers who inflict that violence.

Is Colin Kaepernick allowed in the NFL?

He went unsigned in the following offseason, and has since been steadily working toward finding employment in the league. Kaepernick drew renewed interest in his services in the summer of 2020 when the NFL expressed it would welcome Kaepernick back, but left the decision up to its member clubs to sign him.

Is Colin Kaepernick coming back to the NFL?

Can Colin Kaepernick still play in the NFL?

The year following his polarizing protests, Kaepernick opted out of his contract with the San Francisco 49ers. Since then, he has been unable to sign with any NFL team.

According to a recent Harris poll, Nike's reputation with the general public has actually strengthened over the past two years, and there's been renewed interest in Nike's commercials featuring brand ambassador quarterback Colin Kaepernick.

Colin Kaepernick will be staying in San Francisco through 2020 after signing a six-year contract extension.

Does Colin Kaepernick have a contract with Nike?

According to a person familiar with Kaepernick's agreement with Nike, a new multi-year contract will include Kaepernick-branded shoes and apparel. Nike will also contribute to Kaepernick's Know Your Rights charity. The campaign includes a giant Kapernick billboard in San Francisco's Union Square.Sept 4, 2018

Does Colin Kaepernick have siblings?

Colin in Black x26amp; White gives a closer look into the Kaepernick family, which is headlined by Rick and Teresa Kaepernick, his adoptive parents, and his siblings, Kyle Kaepernick and Devon Kaepernick, who have all been supportive of his stance against police brutality against black people in America.Dec 2, 2021

Does Netflix have Colin Kaepernick?

Colin Kaepernick: Netflix drama follows the birth of a protest figurehead. When American football star Colin Kaepernick took the knee during a national anthem, he became an overnight symbol of the protest and division over race in the US.