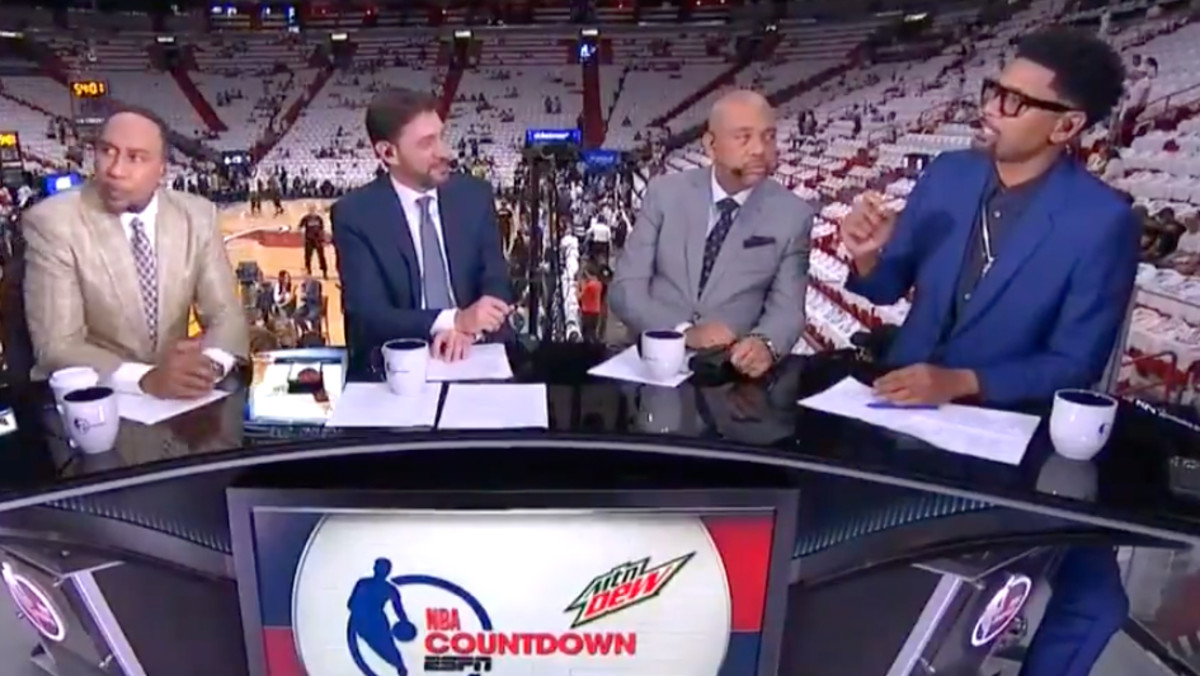 1. ESPN’s NBA studio show has finally given us a moment reminiscent of the outstanding stuff we normally see on TNT’s Inside the NBA.

Rose admitted to being the lone person who gave the Nets’ Kyrie Irving a vote for the All-NBA third team.

Now, Rose should get props for coming clean and giving us an excellent television moment. Having said that, he deserved all the heat he got from Smith.

Irving played in just 29 games this season. When you play in 29 out of 82 games, it doesn’t matter what your stats are; you can’t win any awards. Yet Rose gave All-NBA third team honors to Irving, and his logic didn’t make much sense.

Rose apologized for his actions, but that didn’t stop Stephen A. from going off.

“I want you to explain,” ranted Smith, “what in God’s name made you think at any point that Kyrie Irving, who played 29 games this year, missed 53 games, how in God’s name is he third-team All NBA on any day, any hour, any minute of this season? HOW?!?!”

Rose tried to lay out his reasoning, but it didn’t make any sense.

“In my mind this was a unique season,” said Rose. “Based on this unique season when Kyrie Irving decided to play for whatever reason, he was as dominant as any player in the league and he was one of the top 15 performers when he was in uniform.”

Smith wasn’t having it, though, saying, “You’re not getting away with this.”

After explaining that Rose had been critical of Irving throughout the season, Smith said, “Then behind our backs, like a thief in the night, you slid in this vote for HIM! FOR HIM! He don’t even get to be All-NBA G League. You got to be crazy!”

Rose finally threw in the towel and responded, “That’s fair. I own it.”

There are two lessons to take away from this segment. One, all awards in all sports are silly and useless. Two, colleagues calling each other out always makes for enjoyable television.

2. A brand-new SI Media Podcast dropped this morning, and it features an interview with the new lead voice for Major League Baseball on Fox, Joe Davis.

The 34-year-old broadcaster talks about replacing Joe Buck, taking over for Vin Scully on Dodgers games, whether he wants the job as Fox's No. 2 NFL play-by-play caller, navigating the business at such a young age, his versatility and much more. The interview finishes with a conversation about Davis's love of grilling.

You can listen to the podcast below or download it on Apple, Spotify and Google.

3. Let's break down the most important aspects of Jaylen Brown's memorable dunk against the Heat on Wednesday night.

4. This is a must-watch compilation of TNT promos that have aired during NBA games over the past 25 years. Just a phenomenal trip down memory lane thanks to this very creative YouTuber.

5. I've never seen a catcher throw a ball this far into the outfield before when trying to throw a base stealer out at second base.

6. Oh, great! Another sports streaming service. Now the NFL will reportedly charge you $5 a month to watch local games on only your phone or tablet.

7. RANDOM VIDEO OF THE DAY: Happy 83rd birthday to the legendary Brent Musburger. Thank you for one of the all-time-great point-spread moments.

Be sure to catch up on past editions of Traina Thoughts and check out the Sports Illustrated Media Podcast hosted by Jimmy Traina on Apple, Spotify or Google. You can also follow Jimmy on Twitter, Instagram and TikTok.

How do you vote for NBA All-Star?

How does the NBA All-Star voting process work? The fan vote accounts for 50 percent of the total vote to determine the starters for the NBA All-Star Game. Current players and media members split the other 50 percent. Each ballot consists of two guards and three frontcourt players from each conference.

What is it called when all citizens can vote?

Universal suffrage (also called universal franchise, general suffrage, and common suffrage of the common man) gives the right to vote to all adult citizens, regardless of wealth, income, gender, social status, race, ethnicity, political stance, or any other restriction, subject only to relatively minor exceptions.

What allowed all races to vote?

To combat this problem, Congress passed the Fifteenth Amendment in 1870. It says: The right of citizens of the United States to vote shall not be denied or abridged by the United States or by any state on account of race, color, or previous condition of servitude.

What goes after first of all?

When was Stephen Breyer appointed?

In 1980 he was appointed by Pres. Jimmy Carter to the United States Court of Appeals for the First Circuit, becoming its chief judge in 1990. In 1994 Pres. Bill Clinton nominated Breyer to fill the seat of the retiring justice Harry Blackmun.Jan 27, 2022

When did all women get the right to vote in South Africa?

White women were given the right to vote by the Women's Enfranchisement Act, 1930. The first general election at which women could vote was the 1933 election.

How does all-NBA work?

How do I vote for All-Star MVP?

To vote, send a tweet using the promoted hashtag (see below) + #FirstNameLastName of the chosen player. Twitter account must be set to public in order to vote. Retweets are permitted as valid votes.

When did the Rose Parade start?

How do you become all-NBA?