You are here: Home › Chiefs News 5/26: Juan Thornhill continues to be underappreciated 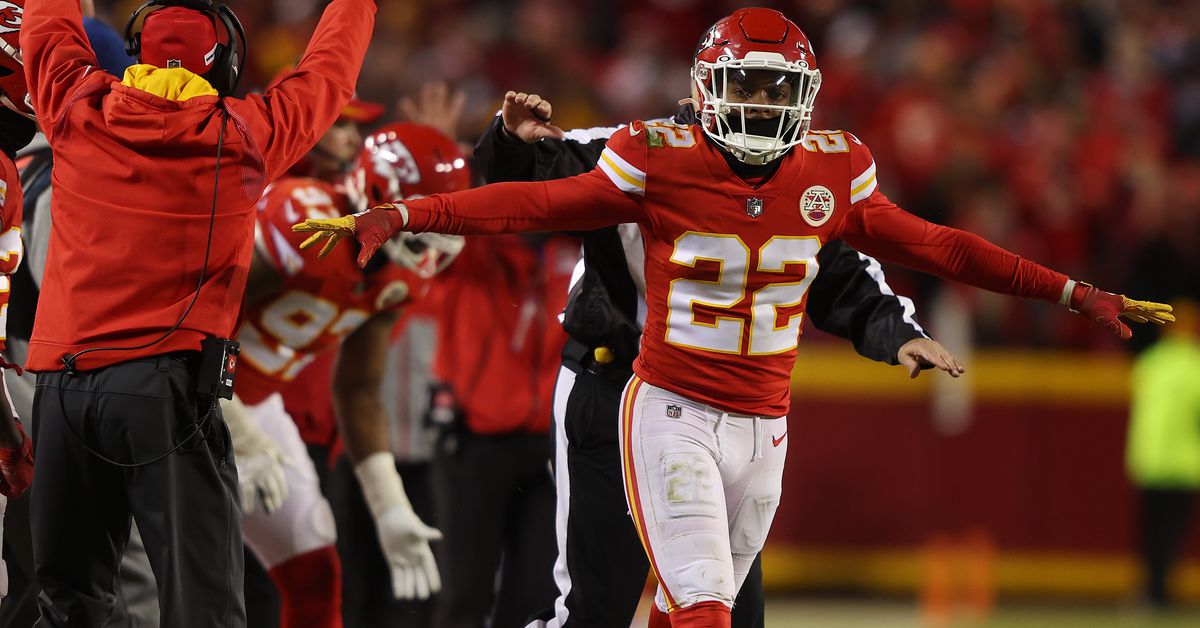 The Chiefs’ secondary changed significantly over the offseason, with the departures of Charvarius Ward, Mike Hughes, Daniel Sorensen and, most notably, Tyrann Mathieu — and Thornhill will be asked to continue the trajectory of improvement and reliable production he showed last season (remember, the defense had a big turnaround). The 2019 second-rounder set a career high in tackles (64) in 2021. It wasn’t just about more playing time, but also understanding and being able to fully execute defensive coordinator Steve Spagnuolo’s scheme. Computer vision shows that when Thornhill’s hips are facing the right direction at the time a ball arrives into his coverage area, opposing passers experience a decrease in passer rating of 35.5. The more Thornhill learns, the worse the opportunities will be for opposing passers.

Chiefs: Patrick Mahomes fires back at Tom Brady for ‘The Match’ troll | FanSided

But things could turn out differently on the golf course. Brady and veteran QB Aaron Rodgers will face off against young guns Mahomes and Josh Allen in ‘The Match’. This sort of spectacle always involves plenty of trash talk in the lead-up, and TNT has delivered tenfold.

The trash talking begins between @TomBrady, @AaronRodgers12, @JoshAllenQB and @PatrickMahomes ahead of The Match.

The QBs had to bring a "receiver" for the chip challenge.

While Mahomes and Allen lost that chipping competition, the former is confident they’ll fare well come the actual tournament. Mahomes fired back at Brady on social media.

Not going to lie pretty impressive… too bad you wasted it a week early…., https://t.co/Xrc085lrLR

One of the more interesting answers from Reid came when he was asked if his football philosophy has changed since leaving Philadelphia and becoming the Chiefs coach in 2013.

“Not much. I try to take care of the bigs (linemen) the best I can, both sides of the ball,” Reid said. “If we can have a good solid quarterback... the corners, I think are important. So I’ve kept with that part of it. The way I treat the players I think is very similar. “The media is different now. ... You’ve got to deal with that. Everybody’s a reporter now. I mean players, too. So everybody has a voice, and so that part’s a little bit different.”

In the immediate aftermath of the Kansas City Chiefs thrilling overtime victory over the Buffalo Bills in the AFC Divisional Round of the NFL Playoffs in January, many were calling it one of the greatest games in the history of professional football. At the 2022 Sports Emmys, it was validated that the television production was more than up to the task of carrying it, as CBS Sports won the Emmy for Outstanding Playoff Coverage.

The NFL and NFL Players Association recently agreed upon new rules for the 2022 season, notably pertaining to injured reserve and players having to miss a minimum of four games before they can return, NFL Network’s Mike Garafolo reported Wednesday evening.

Players designated for return from the reserve/injured or reserve/non-football injury/illness list are eligible to come back after “four games have elapsed since the date he was placed on the applicable reserve list,” per the memo obtained by Garafolo. Previously, players were eligible to return after three games missed.

In addition to changes to injured reserve rules, the NFL and NFLPA recently agreed to changes for the ramp-up period for training camp and changes to practice squads, NFL Network Insider Ian Rapoport reported.

In another alteration to injured reserve protocol, teams will now have eight players permitted to return from IR and/or the reserve/non-football injury/illness list to the 53-man active roster or the practice squad, per season. An individual player can return from IR a maximum of twice per season, but each time counts against the team’s allotted eight designations.

It marked Kaepernick’s first workout with an NFL team since being exiled, and it was the first time the former star quarterback visited with a team since he flew to Seattle to meet with the Seahawks in May 2017, before they passed on the opportunity to sign him.

Kaepernick played at the University of Nevada, Reno, the only school to offer him a scholarship. Currently, the pro team in Nevada is the only one in the NFL that has given the civil rights activist another opportunity.

Raiders owner Mark Davis is following in the spirit of his late father, Al Davis, who provided many opportunities, such as hiring the NFL’s first Black head coach (Art Shell) and its first woman chief executive (Amy Trask) in the modern era. The elder Davis also was the first team owner to draft a Black quarterback in the first round and the second team owner to hire a Hispanic head coach, Tom Flores.

Two women who have accused Deshaun Watson of inappropriate sexual conduct condemned the Cleveland Browns for giving the quarterback an NFL-record $230 million guaranteed contract after trading for him.

“It’s just like a big ‘screw you,’” Ashley Solis said of the contract in an interview on HBO’s “Real Sports with Bryant Gumbel,” which aired Tuesday. “That’s what it feels like. That we don’t care. He can run and throw, and that’s what we care about.”

Watson is facing 22 civil lawsuits from women who have accused him of inappropriate sexual conduct during massage sessions. Two grand juries in Texas have declined to pursue criminal charges, and Watson has denied all wrongdoing.

In case you missed it on Arrowhead Pride

Chiefs running back Clyde Edwards-Helaire is no bust

The first-round running back issue

It is an article of faith among many draft experts that it is not worthwhile to select a running back in the first round. The argument is that because a running back provides so little value that it is a waste of resources to use a precious first-round pick to acquire one.

But there isn’t much evidence that this is actually true. In a recent project to create a more relevant draft-pick value chart, I collected data for all players drafted between 1989 and 2016. On average, drafted running backs provided the drafting team an approximate value (AV) of 11.6. That was fifth behind offensive linemen (14.5), defensive linemen (12.9), linebackers (12.7) and quarterbacks (12.1) — and ahead of wide receivers (10.5), defensive backs (10.1), tight ends (6.3) and fullbacks (4.0).

Even if you don’t find that to be persuasive, it is very clear that NFL general managers don’t believe in avoiding first-round running backs. The percentage of RBs taken in each round of the draft from 1989 through 2016 only varies 1.8%. That is the least variance for any offensive or defensive position — and is dwarfed by the figure for quarterbacks (10.7%).

Besides... the no-running-backs-in-the-first-round argument is essentially based on the idea that the draft is an end unto itself — as if GMs get paid more if they use their draft picks more efficiently than others.

But a GM’s job isn’t to “win the draft.” Instead, it is to build a quality roster. When you’re on the clock, that means you take the player who — in the circumstances then existing — gives you the best chance to achieve that goal. Except for how it relates to your team’s needs, the position they play shouldn’t even be a consideration.

New #APEditorsShow with @pgsween and @Arrowheadphones: Catching you up on the #Chiefs news, putting to bed the idea that CEH is a bust, and Pete's top 5 things to watch at OTA's.

Related Questions and Answer about "Chiefs News 5/26: Juan Thornhill continues to be underappreciated"

What is the struggle continues?

A luta continua (in English: the struggle continues) was the rallying cry of the FRELIMO movement during Mozambique's war for independence.

What happened to Juan Ibarra?

Juan Ibarra is still running his own business out of Nevada.nn According to Juan's LinkedIn, he has owned Ibarra Industries in Nevada since 2004. And now that he's no longer on Gold Rush, Juan has been able to focus on his business as well as his family.Nov 6, 2020

Is 26 too old to graduate college?

No, 26 is too young to graduate. Graduations tend to hem you into a certain type of job or field of interest which you'll likely have to abandon when you hit the real world. When you're 26, your brain has just become physically mature.

What did the Royal Sonesta San Juan used to be called?

Sonesta has officially opened the Royal Sonesta San Juan Resort in Puerto Rico, following a rebranding of the former InterContinental San Juan. The 398-room resort is set in the beach neighborhood of Isla Verde in San Juan.

What are the 5 news values?

The secret to getting those news placements is in understanding this news values list: impact, timeliness, prominence, proximity, the bizarre, conflict, currency and human interest.

What are the 5 types of news?

Do scholarship essays need to be 5 paragraphs?

Did 6 nations used to be 5 nations?

Can I join cricket academy 26?

There is no age limit to join any cricket academy.