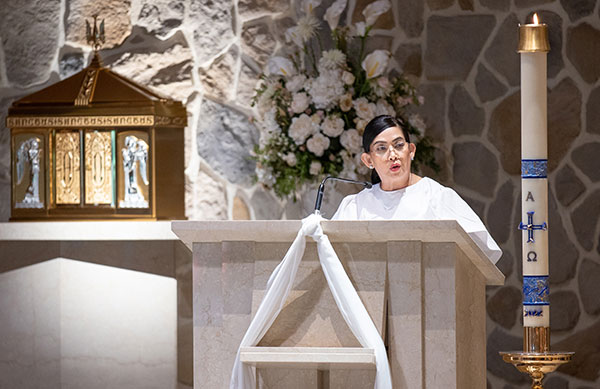 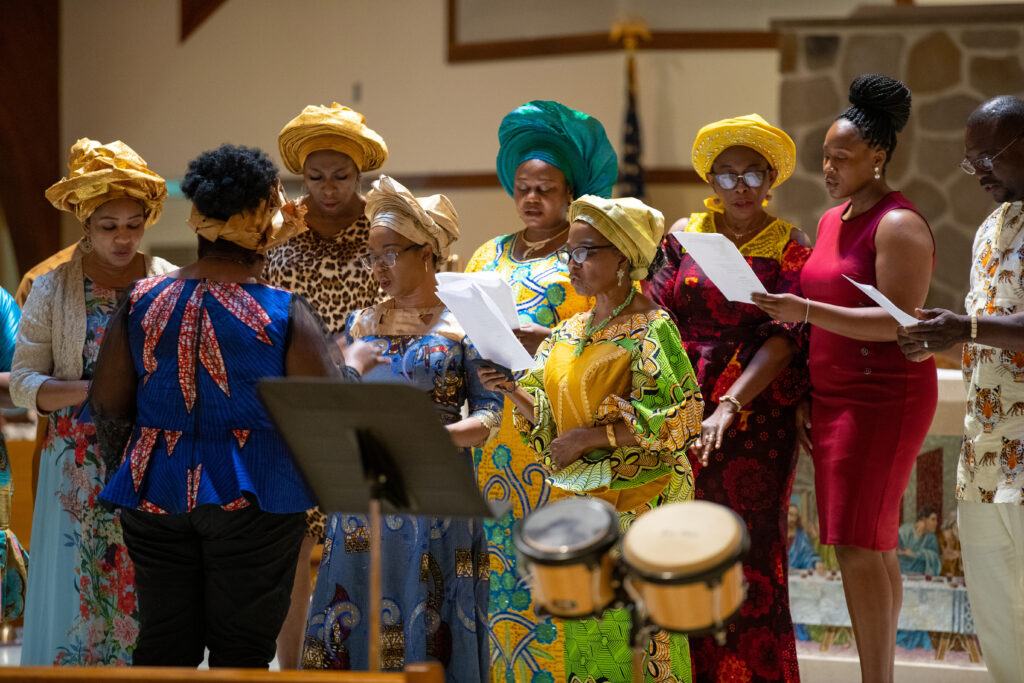 The ICA/African Mass choirs perform during the Multi-Cultural Concert for Peace and Racial Harmony. (Photos by Dave Hernandez)

“It is hard to understand a traumatic experience unless you go through it.”

So said Grace Calvelo-Rustia of the Catholic Community of Christ Our Light, Cherry Hill, as she explained how in the matter of one day, her whole life changed.

Having gathered her family together for the Paschal Triduum, she awoke Good Friday to a panicked scream. Calvelo-Rustia, who is of Filipino descent, jumped from her bed and rushed out the front door. There stood her daughter, home from college, next to her SUV, which was graffitied with obscene and anti-Asian images.

“For 35 years, three generations have lived beautiful and peaceful lives in our house,” she said. “I was shocked. I was confused. I was angry. I had felt safe in our house for years, and now this was happening? I couldn’t help but think and question – did this incident happen because they are giving us a warning sign? Will they come back? If they do come back, will they hurt us?”

She continued, “In one day, feeling safe and thinking that I belonged in the fabric of our neighborhood became a huge doubt. … In one waking morning, we had been identified not as a neighbor, not as a member of a community, but rather as Asians and a target of Asian hate.”

Grace Calvelo-Rustia of the Catholic Community of Christ Our Light, Cherry Hill, shares a personal story of Asian hate.

Calvelo-Rustia was one of four speakers to give witness testimony during the Multi-Cultural Concert for Peace and Racial Harmony held May 22 in Saint Charles Borromeo Church, Sicklerville. More than 100 faithful from around the Diocese gathered for the bilingual event, which was sponsored by the diocesan Racial Justice Commission, in coordination with the Secretariat for Evangelization and Hispanic Ministries.

After each talk, choirs from throughout the Diocese representing different cultures performed. Among them were the Philippine Community of Southern NJ; ICA/African Mass choirs; musicians from Lindenwold’s Our Lady of Guadalupe Parish Shrine; and the Gospel choir of Saint Bartholomew Church, Sacred Heart Parish, Camden. All joined in singing “Kapayapaan” (Peace Be with You) by Maria Nieva, pianist, conductor and children’s choir director in Our Lady of Guadalupe Parish Shrine.

There were talks by Jude Ukam of Sacred Heart Parish, Camden, who spoke on being a Nigerian in America, and Msgr. Leonard Scott, who discussed the differences he has seen regarding vocations and the Black community over his 50 years-plus as a priest. 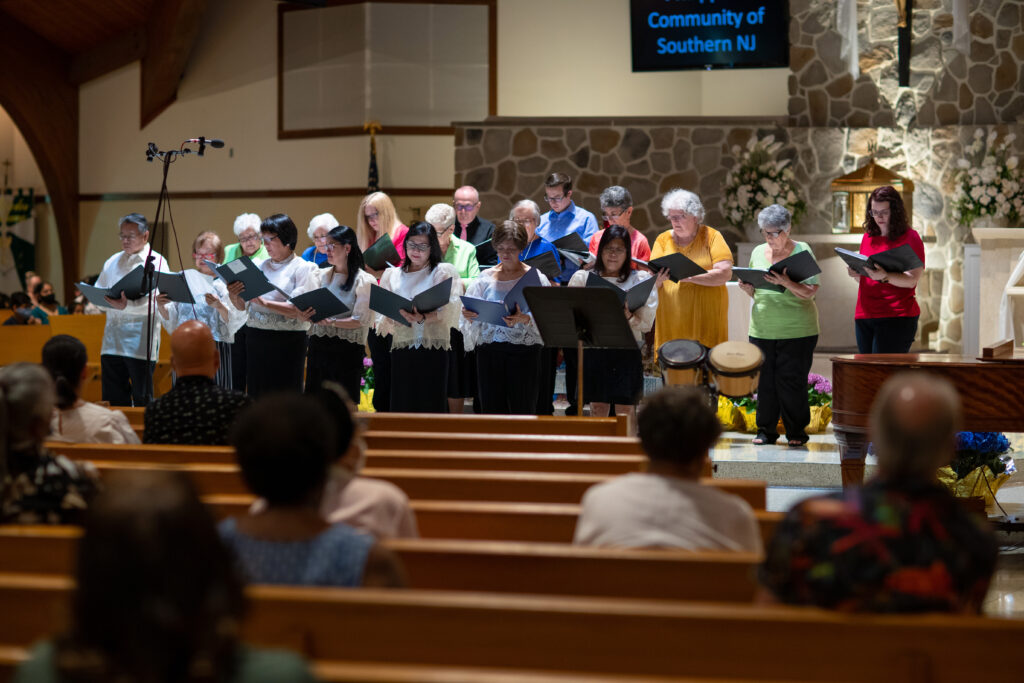 Singers from the Philippine Community of Southern NJ perform during the Multi-Cultural Concert for Peace and Racial Harmony held May 22 in Saint Charles Borromeo Church, Sicklerville. (Photos by Dave Hernandez)

Laura Herrera-Mateo, a young adult from Sacred Heart Parish, spoke of coming to America at age 9, where “being the new kid in the classroom can cause anxiety, let alone not knowing the language.”

“It can be as simple as not knowing your name anymore,” she said, explaining that the Spanish pronunciation she was used to hearing was replaced with an English version of her name.

Such confusion continued when, at the end of 11th grade, she noticed her peers preparing letters for scholarships with the guidance of school counselors. Having been left out, Herrera-Mateo met with her counselor, who explained that because of her immigrant status, nobody had wanted to give her “false hope.”

“I insisted whether there were forms I could fill out or letters I could write for scholarship benefits,” Herrera-Mateo said.

She went on to community college. Two years later, as she watched fellow students prepare letters of intent to prestigious universities, she determined she would not let “anything stop me from learning or gaining knowledge. I knew deep inside that God had a plan for me.”

In her fourth semester, Herrera-Mateo became a recipient of DACA, Deferred Action for Childhood Arrivals, which gives children of undocumented immigrants protection from deportation. She went on to study nursing and education and is currently teaching Spanish and English. 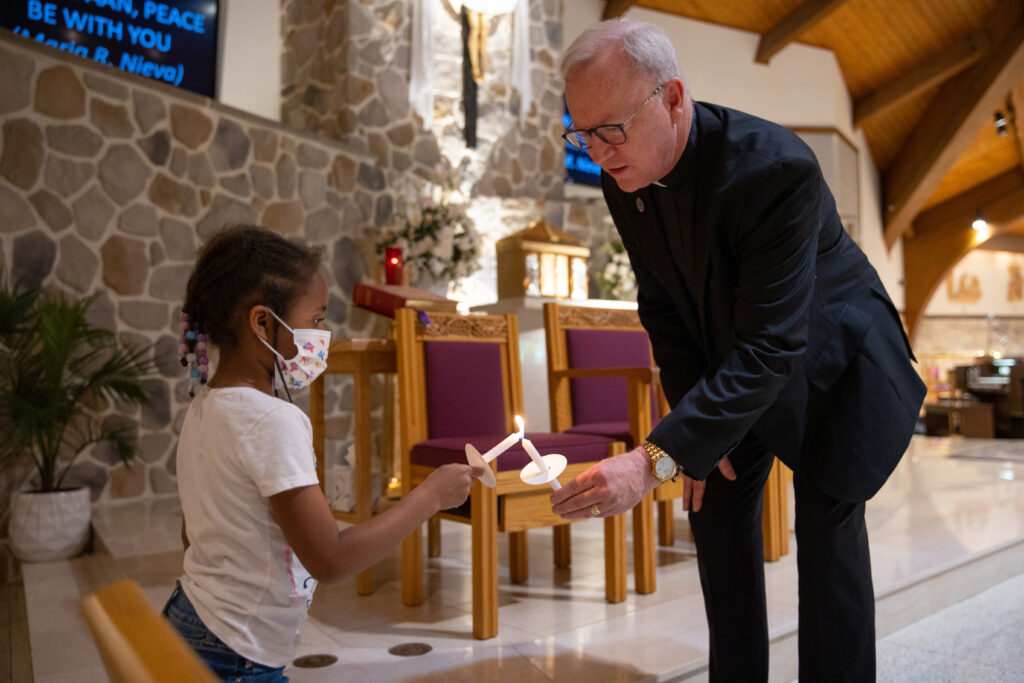 Father Vincent Guest, pastor of Sacred Heart Parish, Camden, shares a flame he lit from the church’s Paschal Candle. Young people went through the crowd afterward, lighting the candles of others before all joined in a last song of peace.

Father Vincent Guest, pastor of Sacred Heart Parish and coordinator of the Black Catholic Ministry Commission and the diocesan Racial Justice Commission, acknowledged how both of the U.S. bishop’s pastoral letters on racial justice – “Brothers and Sisters to Us” (1979) and “Open Wide Our Hearts” (2018) – are critical resources to fight discrimination. He stressed the importance of Catholic social teaching on racial justice and referenced the May 14 supermarket shooting in Buffalo, N.Y., in which 10 Black people were killed.

“The message I think we need to leave with today is that racism is not just politically incorrect or socially unacceptable, but at it’s heart, racism is a sin,” he said.

Why is it important to share stories of faith?

The words of sacred texts can guide us on our faith journey, but sharing our story touches people's hearts and helps them see their story in your story. It is through hearing and sharing faith stories that we grow closer to one another and closer to God.

Camping and lodging facilities are available. The Floral Clock, International Peace Garden, on the border between the United States (North Dakota) and Canada (Manitoba).

What is urge Miami?

What do wedding witnesses need?

Neither you, your witnesses nor your guests need to bring anything with them on the day of the ceremony – just bring yourselves. No-one needs to bring ID as you've already shown your ID when you gave notice.

How expert witnesses are selected?

Proper vetting should include, for example: (1) checking the expert's work and publication history, including their patents, if any; (2) reviewing the expert's speaking engagement and consulting history; and (3) considering other publicly available information to see whether the expert has ever been adverse to your ...

Can you get married without witnesses?

To make it legally binding, the two people getting married, the person carrying out the ceremony and at least two witnesses must all be present. For your own big day, even if you want an intimate ceremony with just you and your partner, you need to be aware of the rules around who needs to be there.

Where do witnesses sit at weddings?

Family members can be witnesses. The witnesses will be asked to sit near the front so that they can clearly hear the exchange of the words of the declaration and contract said by the couple.

What are examples of discrimination?

Some examples of discrimination include the following: a) Harassment – inappropriate jokes, insults, name-calling or displays such as a poster or cartoons directed at a person because of their race, colour, sex or gender, sexual orientation, etc.

How many stories are in The Complete Short Stories of Ernest Hemingway?

There are 60 stories in all. Of the 21 not included in the 1938 collection, the seven heretofore unpublished pieces will interest readers most. Three are especially good.

Who are usually the witnesses at a wedding?

As far as tradition goes, the wedding witnesses are normally the best man and the maid of honour (chief bridesmaid). However, if you don't have a best man or a maid of honour, you could just as easily choose two bridesmaids or two ushers to sign for you.Mar 24, 2021