You are here: Home › Ohio State recruiting: Updating the search for a 2023 QB plus top remaining targets

Ohio State recruiting: Updating the search for a 2023 QB plus top remaining targets 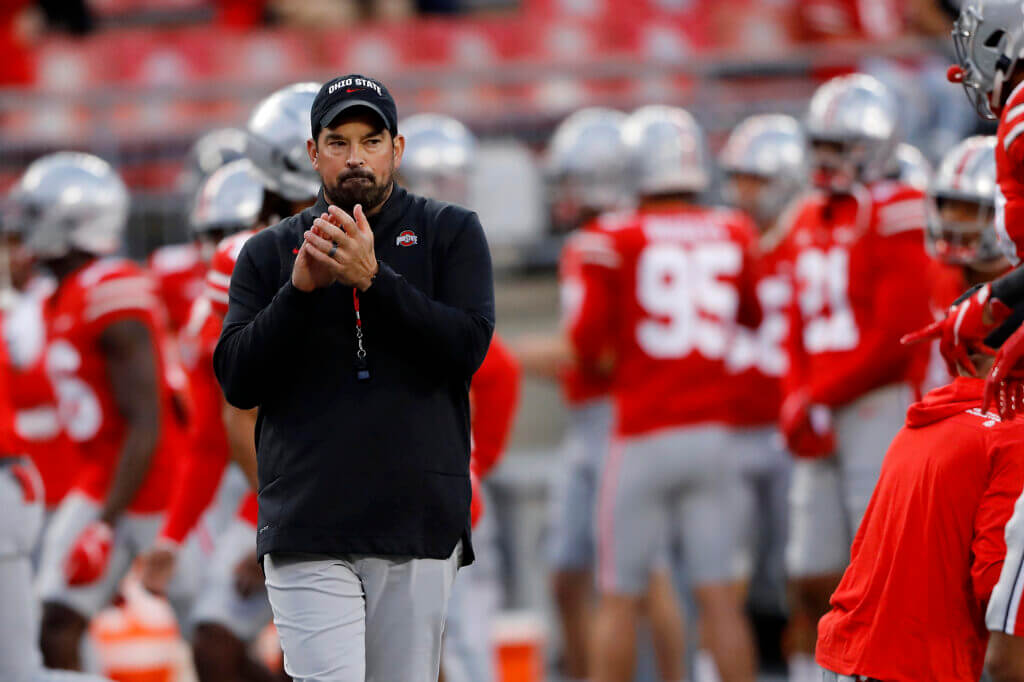 A cursory glance at Ohio State’s future roster situation might suggest there isn’t a tremendous need to sign a quarterback in the 2023 recruiting class. C.J. Stroud is almost assuredly off to the NFL after this season, but Kyle McCord and Devin Brown are still around and will battle for the right to be Stroud’s successor, and five-star prospect Dylan Raiola is already committed in the Class of 2024.

So if the Buckeyes somehow go through this cycle without a quarterback, no big deal, right?

The best-case scenario leaves Ryan Day and position coach Corey Dennis with only two scholarship quarterbacks slated to be on the roster in the fall of 2023. Depending on how those dominos fall in the competition between McCord and Brown, that number could drop to one. Either way, you’d like another player in that room. That could eventually come in the form of a transfer, sure, so long as a fit emerges. In the meantime, Day and Dennis are scouring the country to find a high school prospect to add to this recruiting class.

No, the hunt for OSU’s potential quarterback in this class requires some more thorough searching than a quick scan of the top-10 QBs in the 247Sports Composite.

Dennis stopped by Dripping Springs, Texas, this spring to watch Austin Novosad, a four-star prospect who is committed to Baylor. Novosad told The Athletic that he will return the favor and visit Ohio State for its camp on June 1 and throw for Day and Dennis.

“I’m going to consider some other schools that offer,” Novosad said, “but for Ohio State this visit will help me and give me an idea of what they have to offer. Then I’ll go from there.”

Novosad said he was supposed to visit Ohio State last summer, but the trip fell through. He’ll be here next week with a chance to potentially land an offer. He has already earned an invite to the Elite 11 Finals, which means Ohio State won’t be the only program taking a peek at the Baylor commit.

Another Elite 11 finalist, Brock Glenn, told The Athletic that he plans on visiting Ohio State sometime in June. The three-star prospect from Memphis is uncommitted but holds offers from TCU, Auburn, Mississippi State, Virginia and others.

Some surprise names could no doubt emerge as Day and Dennis look to get other quarterbacks on campus this summer.

Quarterback isn’t the biggest need in this class, but it’s a need nonetheless, and Ohio State is being exhaustive in its attempt to find the right fit.

Ohio State’s one-day position camps start on June 1. The Buckeyes will host six such camps throughout the month, with the others on June 6, 7, 14, 15 and 21. Those camps are often more important for players in the next class, 2024 in this case, and beyond. But there are always a handful of prospects from the current cycle who show up and make a move up OSU’s recruiting board.

In addition to the camps, the Buckeyes will be stacked with official visitors throughout the month. The last weekend of June is shaping up to be the biggest visit weekend with priority targets such as five-star safety Caleb Downs, four-star offensive tackle Olaus Alinen, four-star running back Justice Haynes and four-star linebacker Tackett Curtis among the list of visitors.

Here’s how they stack up as I see it:

The Buckeyes want to load up on safeties in this class, and Downs is the best in the country. Given the competition — Alabama, Georgia, Notre Dame, to name a few — his potential, his location and the need, landing Downs would be one of the best recruiting wins Ohio State has had in the last 10 years. And OSU is right it in the thick of it thanks to some strong work from new safeties coach Perry Eliano.

Tackle remains a need in this class, perhaps the most important depending on what you think of the ability of commits Luke Montgomery and/or Austin Siereveld to play tackle down the road. Even if one of those players does play on the outside, new position coach Justin Frye is still hunting for at least one more pure tackle to join this class. Previous targets Kadyn Proctor (the No. 1 tackle in the class) and Chase Bisontis (No. 5) don’t have the Buckeyes among their finalists. Okunlola, a powerfully-built, 6-foot-6 prospect with big-time potential, hasn’t announced his finalists yet, but he at least still has OSU in consideration. However, he needs to get on campus for this to become a realistic proposition. Watch to see if Okunlola schedules an official visit next month.

All of the tackle stuff mentioned above applies here. The difference is that Alinen, who visited Ohio State back in March, already has an official visit to Columbus on the books. He’s also officially visiting Alabama, Georgia and Miami, with the Crimson Tide looking like the team to beat at the moment. Ohio State could (and would) take both of its top tackle targets, but right now, Alinen — since he already has his official visit scheduled — has to be considered the more realistic option.

Keeley is a Notre Dame commit, the top-ranked player in a class that currently ranks No. 1 in the country. So this is a big swing from Day and defensive line coach Larry Johnson. But they are swinging. Keeley, who comes from the same high school as Nicholas Petit-Frere, was in Columbus during the spring. If OSU can get Keeley on campus for an official visit, then it’s game on. With these programs already recruiting against each other so much, a real battle between the two for Keeley would add another layer to Sept. 3’s season-opener between Ohio State and Notre Dame in Columbus.

Hometown: Many, La.
High school: Many
Ranking: Four-star prospect, No. 56 overall, No. 6 linebacker

New defensive coordinator Jim Knowles has Ohio State in the thick of this recruitment, a carryover of the relationship Knowles started with Curtis when the coach was still at Oklahoma State. Knowles has visited Curtis so many times at this point that he should just buy some property in Louisiana. This figures to be a class light on linebackers, which probably helps with the pitch. Wisconsin and USC are also in it, and LSU is trying to make a late push after recently hosting the No. 6 player in the state. Four-star prospect Troy Bowles — who’s down to Ohio State, Clemson, Alabama, Georgia, Rutgers, Auburn and Oklahoma — is another major linebacker target.

Position coach Brian Hartline signed the No. 1 receiver in 2020 and 2021, and he’s in position to do it again in 2023. Not bad. Inniss, a one-time Oklahoma commit, is considering Lincoln Riley’s new program, USC, as well as Miami and Alabama. He’ll be in Columbus for an official visit in mid-June. OSU already has receiver Bryson Rodgers in the class, but Hartline could be looking at another three- or four-man haul this cycle.

When Lee decommitted from Georgia back in February, it seemed as though Ohio State surged to the front of his recruitment. The Buckeyes are still right in it, but Lee hasn’t committed yet. If Lee eventually picks Ohio State, he’ll see a familiar face in the building. OSU hired Lee’s former high school coach, Miguel Patrick, as a defensive quality control coach in March. The Buckeyes have one corner in their class right now with four-star Florida prospect Dijon Johnson.

Ohio State has made good inroads at Bosco over the last few years, landing Wyatt Davis and Kourt Williams out of that perennial California prep powerhouse. Uiagalelei has also been on campus enough that it’s hard to ignore the connection being built between him and Johnson. That includes an extensive workout during a camp visit last summer. Johnson is on a great run of edge rusher recruiting after signing J.T. Tuimoloau, Jack Sawyer, Omari Abor, Kenyatta Jackson and Caden Curry in the last two classes. Adding Uiagalelei and/or the aforementioned Keeley to that run would be a bit ridiculous.

Could probably do a slash here with Rogers and Carnell Tate, the No. 6 receiver in the class. A group that includes Inniss, Tate, Rogers and Rodgers would be a slam dunk for Hartline. Any combination that includes three of those four would be impressive as well and probably still the best haul in the country. Rogers is also considering the likes of Clemson, UNC, NC State and Florida State. Tate has been a major OSU target for a long time now, but Tennessee is making that interesting. Notre Dame is also after him.

The Buckeyes are in the top six for Reed along with Miami, Auburn, LSU, Texas A&M and Florida State. He’ll be in Columbus for that big official visit weekend at the end of June, and he’s set to announce his decision on July 4. The Buckeyes have an interior player in Will Smith already in this class but are looking to add at least one more tackle. Reed, who’s being recruited by Johnson and new cornerbacks coach Tim Walton, could form that tandem with Smith.

Related Questions and Answer about "Ohio State recruiting: Updating the search for a 2023 QB plus top remaining targets"

Who is the next QB for Ohio State?

Is Ohio State a top 10 school?

Sixteen of The Ohio State University's graduate and professional programs are ranked in the top 10 in their fields in the nation, according to the U.S. News x26amp; World Report 2022 edition of America's Best Graduate Schools.

Is Ohio State a top 50 school?

Ohio State University landed a spot this year in the top 50 best national universities, according to the latest college rankings by U.S. News and World Report.

Ohio State University found a place on the 2022 U.S. News ranking of the Best Global Universities, released today, ranking in the top 100 out of more than 1,700 universities. Ohio State was the state's highest ranking university, coming in at No.

Taking a college course from a public college or university College Credit Plus is free. That means no cost for tuition, books or fees if you attend public school in the state of Ohio.

Who has the top recruiting class for 2021?

Alabama Pulls in No.

Who is the best NFL QB from Ohio State?

#1 - Justin Fieldsnn Justin Fields was selected in the first round of the 2021 NFL Draft by the Chicago Bears. He is just getting started in the NFL, logging just ten starts so far in his rookie season. He appears to be improving on a weekly basis as he looks to end the trend of failed Ohio State quarterbacks in the NFL.

How much does Ohio State spend on recruiting?

Still the Buckeyes spent less than $1 million on recruiting last year, putting them in the middle of the road for Big Ten schools, and placing them behind Michigan, Penn State, Nebraska and Minnesota and only about $125,000 more than Rutgers, Michigan State and others.