You are here: Home › Staten Island on the Run: Who was the great, yet mysterious Mike Dwyer

Staten Island on the Run: Who was the great, yet mysterious Mike Dwyer? 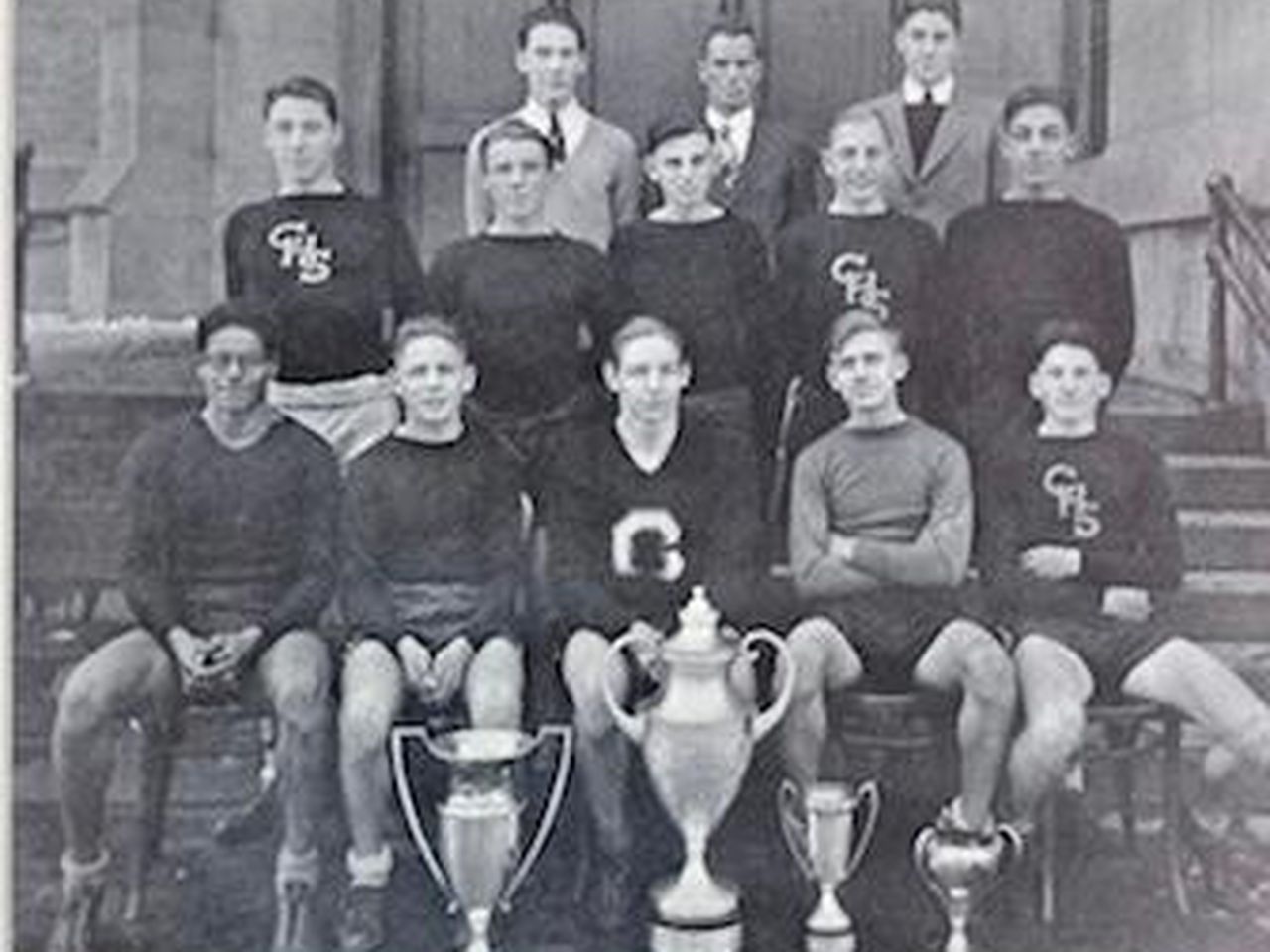 The 1916 picture above of Mike Dwyer is grainy and unclear, qualities which reflect the mysterious career of the legendary runner, coach, official and mentor who left an immeasurable influence on the borough and the region going on more than a century.

All because of my error!

Last month during Boston Marathon week, this writer saluted Bill Welsh who, in the 1955 Boston race finished in 20th-place (fifth American) with a time of 2 hours, 42 minutes, 6 seconds. I then stated that it was the highest finish ever by a Staten Islander in the prestigious event.

Leave it to Mr. Welsh to call and correct me.

“My first coach, Mike Dwyer, finished ninth in the 1924 Boston!”

Sparked by the mistake, I began researching throughout the world of the internet. Sites such as the archives of The NY Times, Newspapers.com and the Association of Marathon statisticians helped.

With assistance from Peter Mancuso, Dan Ingellis, Mike Brennan, Sue Hutton-Brennan, Curtis HS Track coaches Donald Pierce and Kyle Hannifan as well as Coach Welsh, Dwyer’s records have been pieced together albeit with missing chapters in his life.

“It’s going to be tough searching through records for someone named Mike Dwyer,” said one of those above.

With what has been gathered, it is perhaps best to sum up Dwyer’s career in three phases.

“The day before he shipped back home after the war, Dwyer won an Allied Expeditionary Force race in France,” said Welsh.

And it’s verified here below:

“Our famous “Race Horse Mike” Dwyer finished his military track career by overcoming a tremendous lead and winning the medley relay for our regimental team on March 15th (1919) and also by winning the premier event, the eight mile run at Le Mans,” according to the regimental records about the event, where he was presented with his award by American socialite Mrs. Vincent Astor.

After the war, Dwyer would compete at the national level for the next decade, culminating in his 1924 Boston race. Dwyer finished in ninth and ran 2:50:51, a time which ranked him in the top 40 marathon times in the world during the 1920s. His range included 22 minutes, 44 seconds for 4 1/2 miles and 32 minutes for 5 1/2 miles as well as consistently completing the marathon distance around 3 hours alongside a 1924 fourth-place finish in one of the Olympic Trials Marathon races.

Dwyer also belonged to the borough’s American Legion James J. Tappen Post, a Veterans organization which set up a running club as well as applying and getting the approval of the National Track & Field Body (AAU) to sponsor national championships in races from 1-Mile up to the Marathon held in Clove and Silver Lake parks during the 1920s all the way up to the early 1960s. Participants included names like Aaron Patterson, Ed White, Charles Fertig and Vinnie Hutton to just name a select few. In 1930, a “Miss Dorothy Wallace” won the Women’s 1-Mile Run, clocking a time of 5 minutes, 58 seconds.

“They sponsored all the races,” said Welsh. “They’re like the Brighton Kiwanis today.”

In 1928, Albert (Whitey) Michelsen would beat Dwyer in a 20-mile race with loops around Silver Lake, with both bettering the world record, although it was not ratified due to the lack of officials. It was not uncommon during these years, according to the media of the day, to see thousands of spectators attend these events.

“Dwyer took over Curtis in the 1920s and never took any money for it,” said Welsh.

The boys’ cross-country team would win the NYC PSAL Championships nine years in a row, with runners such as Hutton, Martin Cohen, Frank Pacifico, John Flynn Jr., Abraham Giordano and Timothy Cahill to name only a few.

But it was in 1929 that Dwyer’s Warriors achieved the pinnacle. Competing against the best schools of the day at least along the East Coast, notably Schenectady High School (which had never lost a meet in six years), Dwyer’s charges would upset them all on the 2 1/2-mile course at Branch Brook Park in Newark and defeat Schenectady to win the national title by three points. 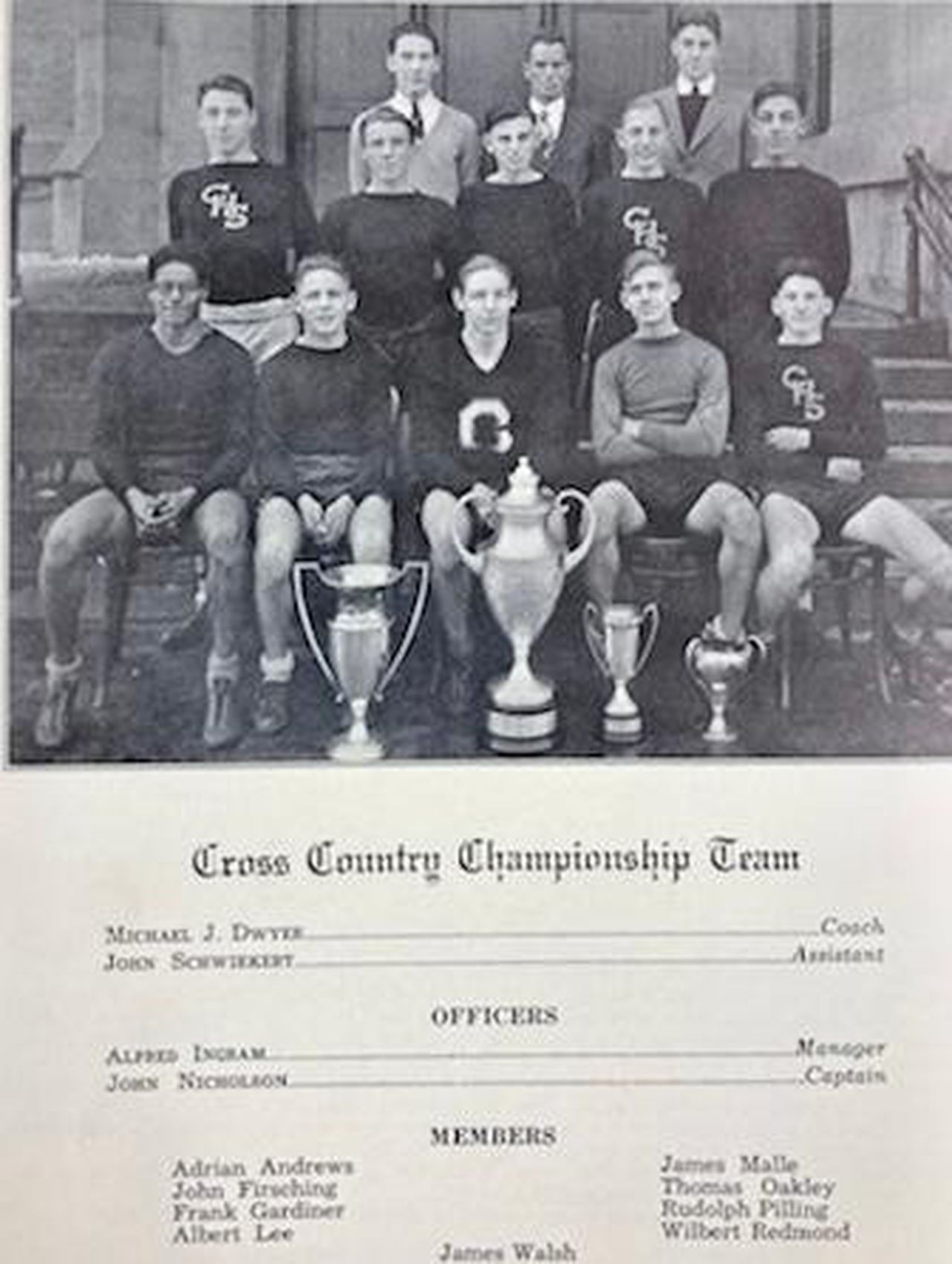 According to the NY Tribune:

“The first Curtis runner to cross the line was Adrian Andrews. Only 3 weeks ago he was transferred from the 2nd team (Junior Varsity) to the first team.”

Years later, Andrews’ son, Bob, would go on to become a dominant regional track and field/road racer/coach and grandson, Robby Andrews, would compete as a member of the 2016 U.S. Olympic team! The Staten Island Harrier runs: An inspiration to others

“He was a very soft-spoken gentleman and was very nice,” recalled Kelly, a top regional runner himself who would go on to organize and direct the annual Lou Marli Thanksgiving Day Run.

“My brother brought me down to Clove Lakes for a Harrier run in 1945 and I had never ran before,” said Kelly. “There were about 10 to 20 people there and the run was 2 loops.”

“Coach Dwyer said that I had run 5-minute per mile pace,” said Kelly.

“But he always fibbed to encourage runners to keep training!” 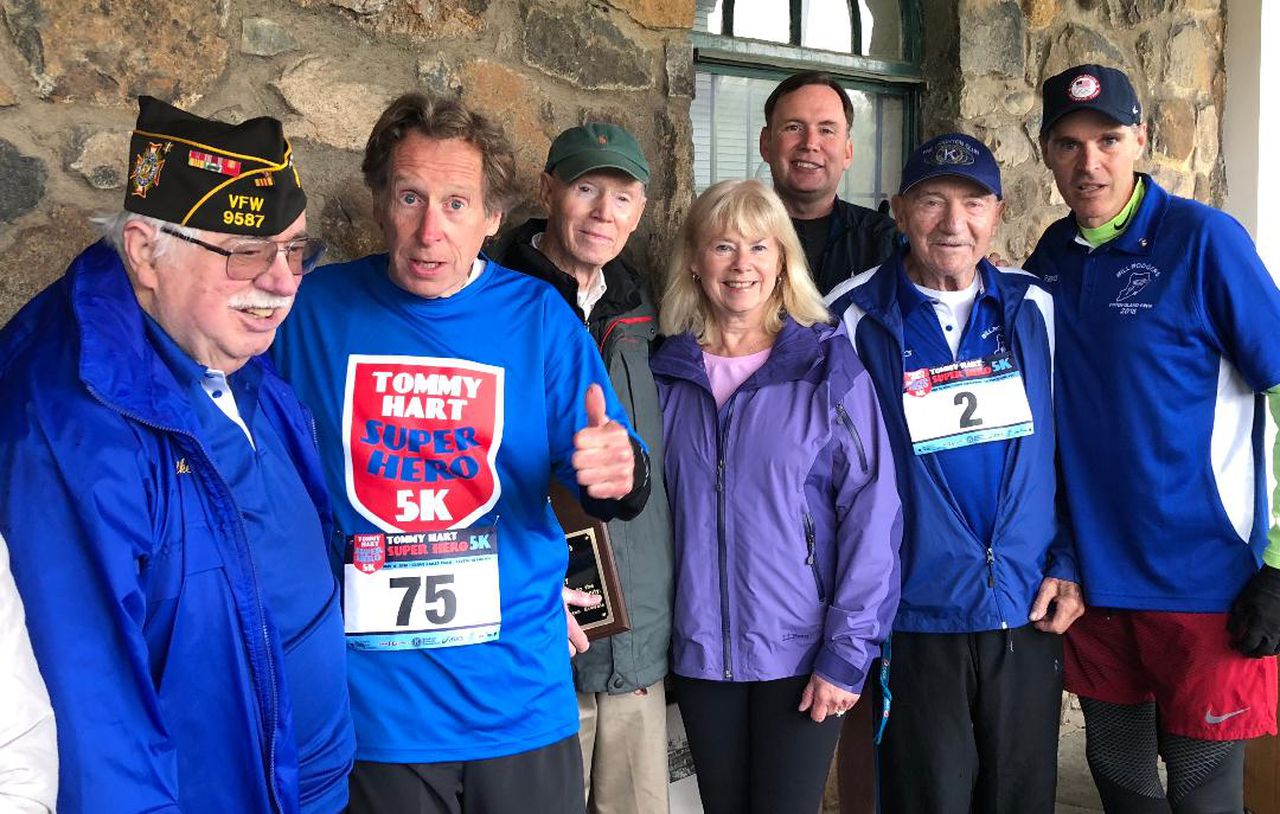 “I was in high school at Augustinian Academy in 1943,” recalled Welsh. “At Clove Lakes there was an old man who was running so well and he could beat me in a 3-mile run,” said Welsh. “I then learned that he had won races in the 1910s and I’m thinking this is 1943!

“He taught me to run during the summer months when others didn’t…he let me run with the Port Richmond team to get me started.”

“Coach Dwyer won my respect … He had a true love of the sport.”

Another father-son duo who knew Dwyer and were perhaps mentored but definitely influenced by him according to newspaper articles with results were distance runner Arthur Hall of the Brooklyn Road Runners Club and his son Arthur P. Hall Jr., a top regional Racewalker for Hutton’s Staten Island Harriers. Hall’s grandson, Arthur the 3rd, would go on to become one of the borough’s all-time distance runners and coaches and, like Welsh, is a member of the Staten Island Sports Hall of Fame. 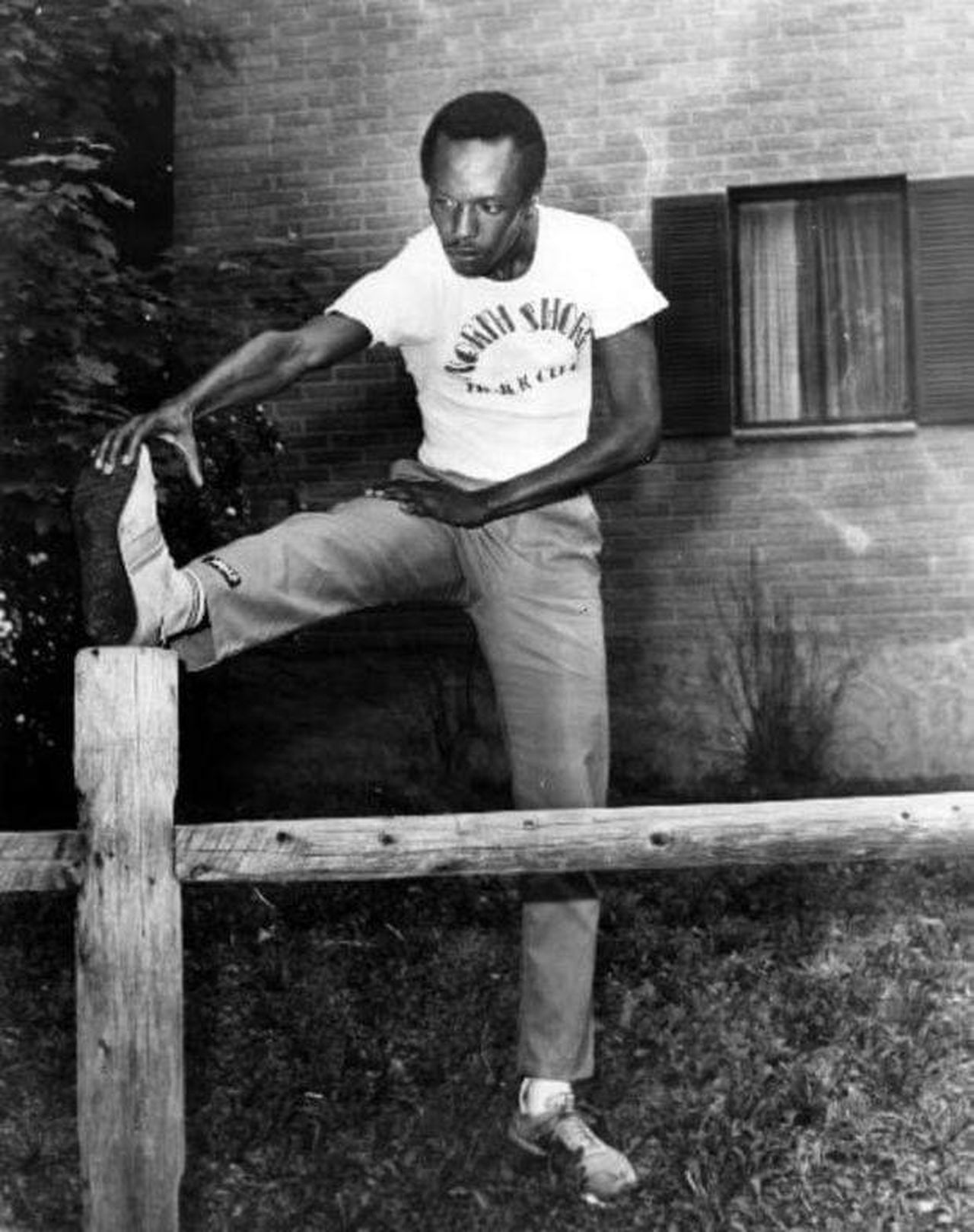 The late great Art Hall is regarded as arguably the greatest runner in S.I. history. His father and grandfather both were competitive runners and racewalkers who were influenced by Mike Dwyer.

The legacy and the mystery

Unsure if he was ever married or ever had children or family, no one so far has been able to find out Dwyer’s birthday, or the date of when he passed.

“I know after Curtis he also coached Port Richmond,” recalled Welsh. “I think he worked and retired as an official in Immigration and Naturalization services. But I don’t know even where he lived.”

“If my late brother Tommy was still here, I’m sure he could fill us in with more information on Coach Dwyer,” said Sue Hutton-Brennan, the daughter of Vinny Hutton. “We just don’t know.”

“In 1975, I raced my best race at the Lou Marli run,” recalled Marty McGowan, a top local runner who ran for St. Peter’s Boys HS and Marist College.

“In those days there were only trophies for the top 5 finishers and I won the 5th place award,” said McGowan in a time before age-group awards were part of the racing scene. “It was called the “Mike J. Dwyer Memorial Trophy”

“With what we know, I believe Coach Dwyer should be considered for the Staten Island Sports Hall of Fame,” said Welsh. “He shouldn’t be forgotten.”

“We are excited to welcome runners and walkers.” said Mike Schnall, president of SIRA. “We’ll be awarding a $100 prize from the Runner’s High to our male and female champions. Age group awards are sponsored by the Staten Island Advance and Brighton Kiwanis Club. Each adult runner and walker gets a commemorative chip-timing bib, a quick dry t-shirt, reusable bag, reusable water bottle, and other goodies.”

“We are proud to present our scholarship award to Meghan Leonard (Notre Dame Academy) - attending Loyola University! We wish her the best of luck!”

The monthly quiz will return next month!

Related Questions and Answer about "Staten Island on the Run: Who was the great, yet mysterious Mike Dwyer?"

Staten Island is the second wealthiest borough.nn The median household income is $82,783, according to the U.S. Census Bureau. It came in just under Manhattan, where residents make $86,553. Queens takes third place with $68,666, while Brooklyn and the Bronx came last, with $60,231 and $40,088 respectively.

How much is the Staten Island Advance?

STATEN ISLAND, N.Y. — The price of the Sunday Staten Island Advance will be raised to $2.50 on Nov.

Where is the Staten Island Advance located?

Where did the Staten Island Yankees go?

On November 7, 2020, the New York Yankees announced that they were withdrawing from Staten Island as well as abandoning their affiliation with the Trenton Thunder as they were moving forward with their new Double-A affiliate: the Somerset Patriots, but they would seek to place a team from the independent Atlantic ...

The Staten Island Advance will no longer be printed on Staten Island . . . after 134 years. Before you get in a tizzy thinking the newspaper and website are going out of business, STOP! We are not. We are just consolidating the printing operation at an Advance plant in New Jersey.

Staten Island is a city in Richmond county, New Yorknn These are some of the top-rated public schools in Staten Island based on a variety of measures, including academic performance and equity.

Staten Island Advancenn Emails should receive a response within 24 to 36 hours. Contact the newsroom: Send us tips at [email protected] or call the News Desk: 718 981-1594.

What rank is Staten Island Tech?

Staten Island Technical High School is ranked #37 in the National Rankings. Schools are ranked on their performance on state-required tests, graduation and how well they prepare students for college.