You are here: Home › AIC, STCC collaborate to create a smooth student pathway between the schools

AIC, STCC collaborate to create a smooth student pathway between the schools 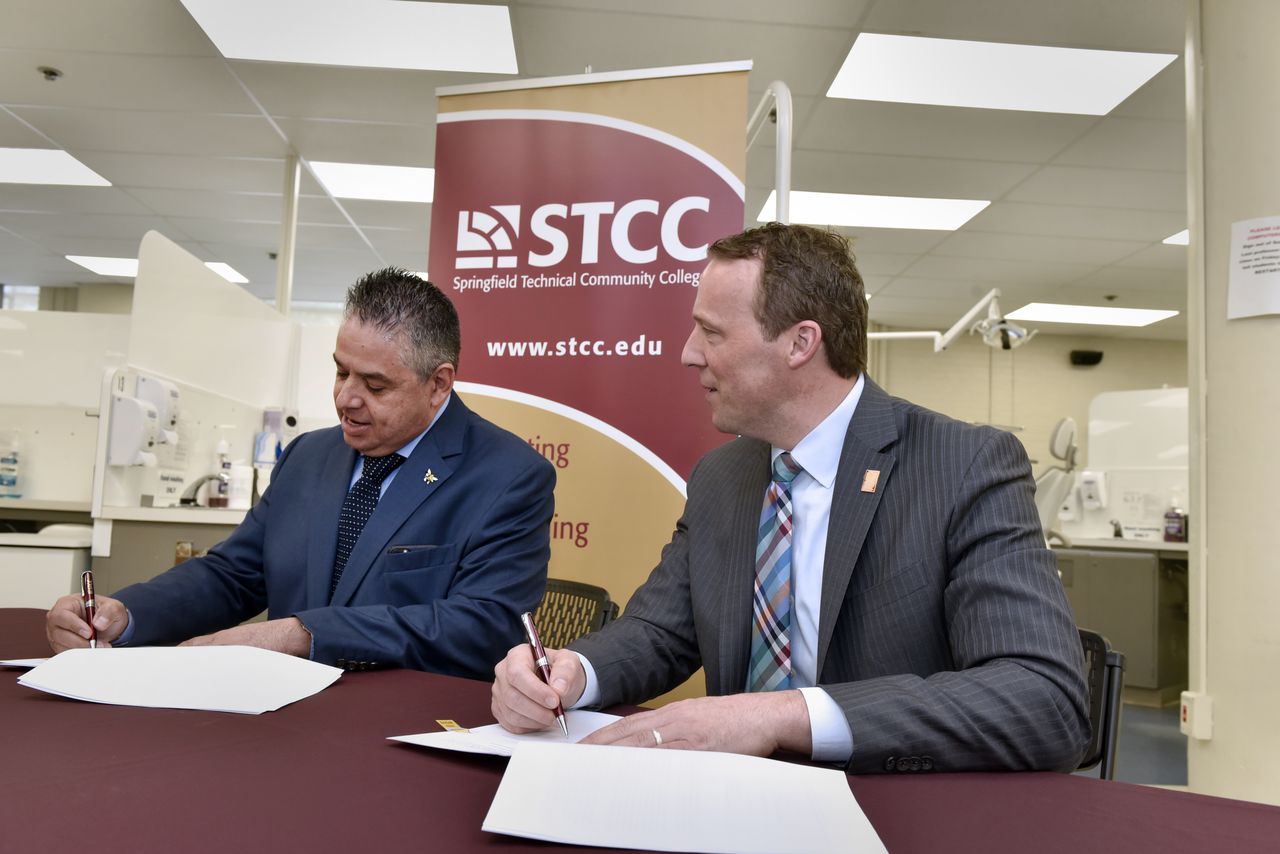 “Articulation agreements come and go, but I see this could be a historical document. It’s what (institutions) do with it that counts,’' AIC president Hubert Benitez said.

For Benitez, this agreement reflects his stated goals to make college and a four-year degree more accessible and affordable to all students, but particularly those of color, first-generation college students or those facing financial obstacles.

“Our goal is to create a seamless transition for a student from STCC to arrive at AIC and pursue any degree of choice,” he said.

“A seamless connection can be done without loss of time, credits or money. Our goals are aligned and the geographic (proximity) of the schools can’t be beat,” STCC president John Cook said.

The partnership comes just 46 days after Benitez assumed the AIC presidency. He’s declared “seamless pathways” from community college to AIC to be among his priorities.

According to AIC vice-president of admissions Kerry Cole, transfer students will receive a $4,000 scholarship per year once they enter AIC as juniors, in addition to their earned merit scholarship, before any need-based aid is awarded.

“For many students, this could make AIC less expensive than public institutions,” Cole said.

At AIC, the program is called Direct Connect. Students can earn up to $18,000 in financial gift aid - not loans - before being evaluated for additional need-based aid.

The AIC Direct Connect program will allow students to study and major in their area of interest while attending community college.

Benitez said the increased workload from the program will be shouldered by AIC staff, so as not to add burdens to the STCC staff. Cook and Benitez described a plan by which AIC officials communicate with students while they are still at STCC, smoothing the transition to the four-year school.

“We call it a shared advising model,” Cook said.

Cook said the average STCC student age is 26, which means many have already given plenty of thought to their career paths. Benitez said the agreement signed Thursday puts theory into action.

“I believe in community colleges. We’re here to make this happen,” Benitez said.

The two schools have a history of partnership, but Cook said this collaboration “reinvigorates” the relationship. He said that along with Benitez’ arrival, a new era between the two Springfield schools is underway.

One noteworthy aspect is that the new arrangement is designed to give students opportunity in any AIC major in which they choose to seek a degree. Similar partnerships are not new among two-year and four-year schools, and they are growing in popularity, but many have been targeted to specific majors or courses of study.

“Our goal is to make the transition really easy. How do we take the STCC credits and make them work (upon entering AIC)? That’s what we’ll be working on,” Dodge said.

For most of the 75-year history of community colleges in Massachusetts, entry into two-year schools, and later four-year colleges, generally involved two separate admissions. Without a clearly defined pathway to the four-year college, many students considered their associate’s degree the logical endpoint for their education, for reasons involving both commitment and cost.

The goal of collaboration has been to provide opportunity, motivation, financial aid and - of crucial nature - a melded, cohesive curriculum path. That avoids an often jarring shift from one curriculum to the next.

It also provides a student pipeline to the four-year school, at a time many such schools are seeking to maintain enrollment levels. The partnership also offers a useful and valid marketing opportunity for both school.

Benitez and Cook said they shared a belief in the three core educational values of access, diversity and opportunity for students.

Related Questions and Answer about "AIC, STCC collaborate to create a smooth student pathway between the schools"

What is a student pathway?

Pathway programs are preparatory courses that are designed to help international students build the skills, knowledge, and qualifications that they will need to enter a bachelor's or master's degree program. These programs generally last one academic year, and they do not end with a degree.

How do you collaborate with international schools?

How can a student create a scholarship?

8 Steps to Starting A Scholarship Fund

How do I choose between AIC and BIC?

The main difference Between AIC and BIC is that their selection of the model. They are specified for particular uses and can give distinguish results. AIC has infinite and relatively high dimensions. AIC results in complex traits, whereas BIC has more finite dimensions and consistent attributes.

How can student affairs and academic affairs collaborate?

Is AIC a good college?

AIC is a very good school. The majority of the students are athletes and we all go along very well. The counselors are very helpful and professors are very good. What I like about American International College is that it is a relatively small campus where it is easy to find each recourse being offered.

How do I create a student workshop?

How to design a training workshop

How do you create a student union?

We have the answer to that in four simple steps!

How can a student create an organization?

How Create a Student Organization

How do you create a student portfolio?