You are here: Home › Daughter of immigrants: Graduation a triumph for family's sacrifices

Daughter of immigrants: Graduation a triumph for family's sacrifices 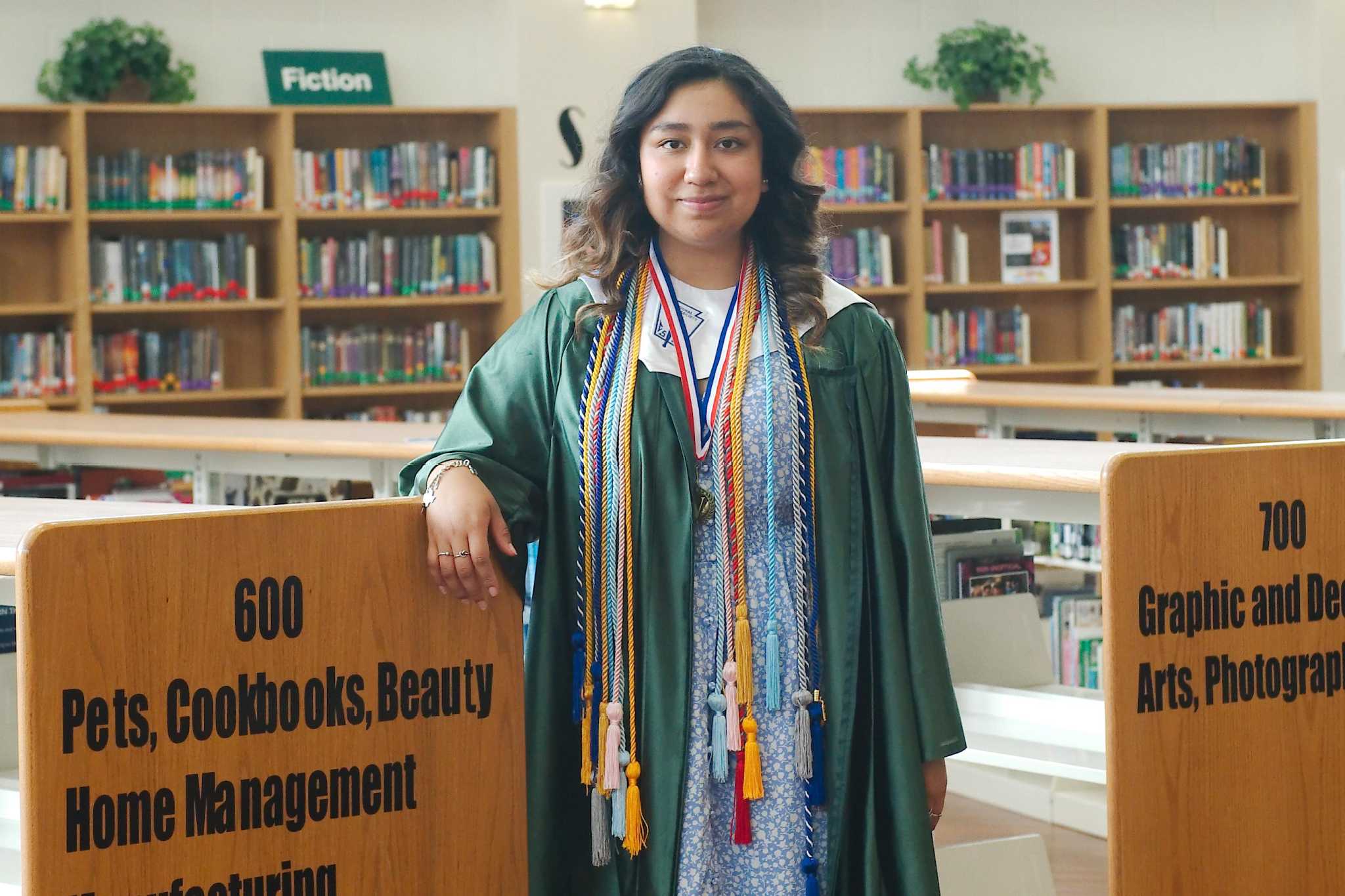 This is a carousel. Use Next and Previous buttons to navigate

When Devany Balbuena was writing her commencement speech for the Pasadena High School senior class of 2022, she knew she wanted to send a message that transcended academics.

The graduating senior’s accomplishments fill all the boxes that make her an obvious choice to represent peers a graduation — she is an honor student who volunteers in her community, she’s active in various student clubs and she plans to study mechanical engineering at the University of Texas in Austin.

But the 17-year old mostly wanted to send a personal message about education, opportunity and economic equity.

The daughter of immigrant parents, Balbuena is the first person in her family to attend high school. When she graduates today, it will be a defining moment for her parents and everything they worked for.

“It’s not necessarily what it means to me, but what it reflects (upon my parents),” said Balbuena, who has two younger siblings. “I’m very glad that through this (my academic success), my parents are assured that they made the right decision to move to this country, and not only that, they did a good job raising me and instilling the values in me that have allowed me to graduate.”

David and Citlali Balbuena moved to the United States from Ciudad Altamirano, Mexico, one year before Devany was born.

“For my parents, it was never explicitly stated that they expected me to go to university,” Devany Balbuena said. “In fact, I think the height of their expectations were probably just to graduate high school.”

Her father is a house painter and saw up close how better economic resources make the doors open wider to educational opportunities.

“My father paints homes of wealthy families, and he sees how much money these parents put into tutoring,” Balbuena said. “So, I don’t think he expected me to achieve (a high level of academic success).”

Her family, she said, inspired much of her commencement speech, through the lessons of hard work and perseverance.

“My father worked very hard to put my siblings and I through school, and I don’t want to waste the sacrifices he made, and that’s always been a motivator,” she said. “I feel a lot of times immigrant parents are very hard on themselves because they see what they cannot give their children, and I think my parents did more than enough. I hope my father knows he did a good job.”

As an immigrant family, the Balbuenas were more vulnerable to being taken advantage of and more willing to accept certain inequities, she said.

“I saw my father struggle through life, and that was a reminder of how important education was,” she said. “There were times, before he knew better, where he would leave without a paycheck because people wouldn’t pay him and he couldn’t contest because he didn’t know the language and we didn’t have enough money for an attorney. So, that really resonated with me as to why I needed to learn how to fend for myself.”

At an early age, Devany Balbuena developed a passion for volunteering with groups that work to close the gap between affluent and low-income families.

The day before she turned 14, she began interning at a personal injury law office that helped families receive access to legal services at affordable costs. Balbuena also spent much of her time outside school as a volunteer designing and editing websites and formatting at Kivato Education Center, which provides tutoring services for disadvantaged youth.

“I don’t think enough opportunities and resources are offered to low-income communities; so I often try to involve myself in (that kind of work),” she said.

Balbuena loves school. Her favorite subjects have been math and English, and she was accepted into the honors program at University of Texas Austin for mechanical engineering as a Terry Scholar, a four-year scholarship for Texas resident students attending UT Austin and several other universities in the state.

Balbuena also wants to study law with a focus on intellectual property.

“A lot of attorneys are characterized as evil, selfish and vain human beings, but most of them do a lot for their community and are at the forefront of democracy,” she said.

Intellectual property, Balbuena said, deals with patents, and the work would build on her passion for serving for the underserved.

“One of the topics in my debate class was whether companies or the U.S. disclose their patents to Third World countries,” she said. “People in these countries are dying of basic (and treatable) diseases like malaria because they don’t have the access to the patent for certain medicines. If the patent were to be lifted, it could create generics or a more affordable version of the formula. Because of the legal restrictions in place, they don’t have access at all. I really want to do something about that.”

“For the most part, the beginning of my childhood was just moving around from state to state,” she said. “My father would offer to paint an entire apartment complex and they would offer us a room for the amount of time he was painting, and then we would move again.”

Balbuena believes her family’s story of economic restrictions and language barriers isn’t unique or unusual at her school, and she hopes it will resonate with her classmates.

“Since many of us come from similar backgrounds, first I want to thank the parents for their sacrifices; and second, it signifies the hours we spent crying over homework we didn’t understand (because of) the language it was in,” she said. “I want to honor that common milestone.”

Related Questions and Answer about "Daughter of immigrants: Graduation a triumph for family's sacrifices"

What was the triumph of surgery?

“This is a triumph of surgery!” meant that the treatment that was given to Tricki had been successful.

Who are triumph subsea?

What is the conclusion of triumph of surgery?

Answer: A dog named Tricki was pampered by his owner which had turned him like a bloated sausage and his condition was worsen. So it was the victory of the plac for which Tricki turned into a healthy and muscled dog. It also signifies that the parents should not be indulgent which can cause harm to their children.

Is Calgary a good place for immigrants?

It has one of the highest visible minority rates in Canada, behind only Toronto and Vancouver. Most Calgary residents are of European origin. Many immigrants are attracted to Calgary, because of the low tax rate, strong oil and gas and agriculture industries and above all, the lifestyle it offers.

What was the triumph of surgery Class 10?

Mrs Pumphrey thinks that Tricki's recovery is a triumph of surgery because his illness was very serious. She was of the opinion that there were very few chances of Tricki to improve and he needed immediate medical attention. Thus, his revival without any medicinal treatment was a great achievement, according to her.

How do I apply for graduation at U of A?

Can immigrants apply for scholarships?

Undocumented students cannot legally receive any federally funded student financial aid, including loans, grants, scholarships or work-study money. In most states, they are not eligible for state financial aid.

Is Saskatchewan good for immigrants?

Saskatchewan has a high standard of living, which helps to attract immigrants to settle in the province. The average family income is approximately $80,000, higher than the Canadian average, and the minimum wage is $10.20. The cost of living in Saskatchewan is quite affordable by Canadian standards.