You are here: Home › The allure of Agra gayaki

The allure of Agra gayaki 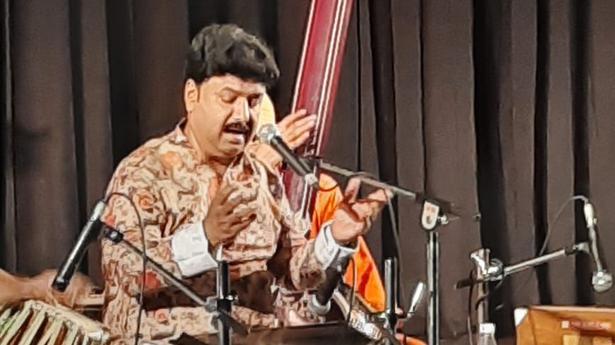 Exponents of the Agra gharana are few compared to other ‘gayakis’. As such one looked forward to the vocal concert by Jainul Abedin from Kolkata, organised by Sanskriti Foundation and the India International Centre, in Delhi.

Beginning his concert with raag Megh Malhar, Jainul essayed an impressive 30-minute alap in dhrupad style, he soon reached the rishab in the lower octave, exhibiting his riyaaz. One is used to male singers of the Agra gharana attempting to sound like Ustad Faiyaz Khan, the most recognisable voice of the gharana, Jainul’s gravelly voice has a distinct texture.

When asked about it, he recounted his guru Ustad Latafat Hussain Khan’s advice:  apni awaaz mein gaao, nakal matt karo.  Hum to unke pyaar mein maare gaye, unki parchayi se nikal hee nahin paye (Sing in your own natural voice, don’t copy. Our generation were overawed by him and tried to copy him so much that we never emerged from his shadow).

Jainul’s alap was a true delight — an authentic dhrupad style ‘nom tom’ alap. A bonus was the muted pakhawaj style accompaniment during the ‘jor’ position by Bibhash Sanghai. This wonderful tradition is a rarity these days even with exponents of dhrupad. Slowly increasing the tempo, Jainul ended the alap with clear enunciation of ‘Anant Hari Narayan’. The entire concert was marked by his clear diction. Vinay Mishra’s harmonium accompaniment was extraordinary, seamlessly maintaining the dhrupad style of note rendition, which is not easy for someone trained in the khayal tradition.

The madhya laya jhaptal bandish ‘Garaj ghataa ghan’ was said to have been composed by Sadarang, (aka) Niamat Khan (the profusion of extant vocal compositions attributed to him makes one wonder if he was primarily a ‘beenkar’ and, not a vocalist). The next composition was Ustad Faiyaz Khan’s, set to Ek taal, ‘Aaye re ati dhoom dhaam’, where the Agra gharana signature ‘bol baant’ was dominant.

Showing his mastery over raags, Jainul next rendered a Malhar and a Surdasi Malhar. Since both the raags have somewhat similar facets, with glimpses of Vrindavani Sarang, (the traditional version of the raag has only ‘uttri Ni’) he highlighted the differences in an impressive manner. The first teen taal bandish was the popular ‘Baadarwa barasan ko aaye’, he sang this with a gentleness not usually associated with it.

His full and complete singing of the extended ‘antara’ was laudable; many modern exponents forsake this. The drut teen taal bandish of Ustad Latafat Hussain Khan also had the ‘sum’ on the ‘teep sa’. This composition was sung with flourish.

The doyen of Agra gharana Ustad Khadim Hussain Khan is believed to have said,  har bandish  ka ek alag mijaaz hai (every bandish has a character of its own ), and Jainul demonstrated this perfectly. His entire concert was pure Agra ‘gayaki’, with the ‘layakaari’, and fullness of exposition of the ‘bandish.’

The gharana is known for certain raags. One such is Barwa, which on request Jainul sang next, ending the concert in the Agra tradition with a thumri. However his rendition was somewhat prosaic.

Talking about his association with Ustad Latafat Hussain Khan, Jainul recalled he was seven when he first heard the maestro sing in Kolkata, and wanted to learn from him. But this seemed impossible as Ustad Latafat then lived in Bombay. Two years later, Jainul won an ITC scholarship and to his delight found Ustad Latafat Hussain had joined ITC SRA as a guru, and was to be his teacher. His concert showed how he has kept the unique Agra gharana ‘gayaki’ alive.

The Delhi-based author writes on Hindustani music and musicians.

Related Questions and Answer about "The allure of Agra gayaki"

Who is CDO of Agra?

Prabhu Narain Singh is the District Magistrate of Agra City.

Who is the DM of Agra district?

Who is present SP of Agra?

SSP, Azamgarh, Sudhir Kumar Singh has been posted as SSP, Agra, while G Muniraj has been shifted in the same capacity to the election cell at DGP headquarters.

What is the meaning of the ending of The Power of the Dog?

By the end of the film, we learn that Cumberbatch's cruel tyrant, Phil, is dead from anthrax — but the root cause of that sudden and mysterious cause of death may not be immediately clear. Earlier in the film, we learn of an anthrax outbreak that has killed several of the ranch's cattle.Feb 8, 2022

What is the salary of the president of the University of Texas?

The new president at the University of Texas at Austin is poised to make $1.25 million a year, $255,000 or about a quarter more than his predecessor, Greg Fenves. The proposed salary must still be approved by the UT System Board of Regents at its meeting this week.

Which of the following are the tagline of the Ministry of Tourism Government of India?

In a bid to attract more foreigners, Tourism Ministry has coined a new slogan 'Your search ends here' as part of its aggressive Incredible India campaign across the globe.

Who appoints the members of the Board of Regents of the University System of Georgia?

The governor appoints members of the Board to a seven year term and regents may be reappointed to subsequent terms by a sitting governor.

What was the purpose of the Imperial Order of the Daughters of the Empire?

The IODE is a women's charitable organization in Canada that focuses on children, education and community service. Originally known as the Imperial Order Daughters of the Empire, the organization was founded in 1900 to promote and support the British empire and its soldiers.

Is the Bureau of Land Management part of the Department of the Interior?

One of nine bureaus under the Interior Department, the Bureau of Land Management's roots go back to America's founding. BLM was established on July 16, 1946, when the General Land Office and the U.S. Grazing Service were merged.