You are here: Home › USC football’s top 2023 recruiting targets by position: Setting up a busy summer 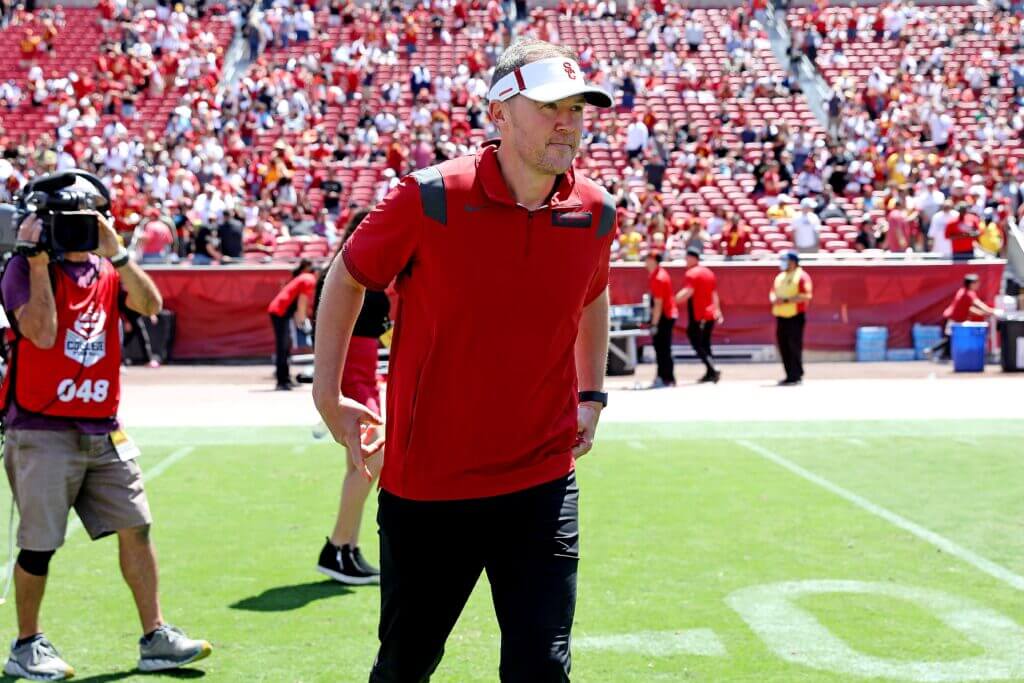 LOS ANGELES — From official visits to camps, recruiting takes the spotlight at USC once the calendar flips to June. As of Wednesday afternoon, the Trojans’ 2023 recruiting class sat at No. 9 nationally, per the 247Sports Composite, with a total of seven commitments, including three from five-star prospects.

Lincoln Riley and his staff are looking to add to that this summer, which makes now a good time for a position-by-position look at the main targets and priorities as the 2023 recruiting cycle heats up.

USC is settled here with five-star Los Alamitos (Calif.) commit Malachi Nelson. The Trojans will need to ensure he signs before turning their focus to the 2024 cycle. USC offered 2024 five-star Dylan Raiola and looked like the leader for a minute before he committed to Ohio State.

The Trojans have had their sights set on signing two high school running backs in this class and have hit that quota with commitments from a pair of Texas natives: four-star Quinten Joyner and three-star A’Marion Peterson.

Landing early commitments from two five-stars puts USC in a good position. The Trojans would be happy to add either Moore or Ennis, but if the class ends up just being Branch and Lemon, I don’t think there would be any panic on their part.

This position group, along with the defensive line, has been a focus for USC fans amid the program’s multi-year struggle to add elite players on the line of scrimmage.

The Trojans have yet to receive an offensive line commitment in the 2023 cycle. Five-star IMG Academy (Bradenton, Fla.) offensive lineman Francis Mauigoa is still a major priority for this coaching staff.

Five-star Pinnacle (Phoenix) tight end Duce Robinson is the No. 1 player at the position and a major priority for USC. The Trojans have also been in the mix for four-star Folsom (Calif.) tight end Walker Lyons.

There seems to be increasing buzz for three-star tight end Kade Eldridge out of Washington, but landing him would not alter USC’s pursuit of Robinson or Lyons.

USC has to recruit better along the defensive line if it’s going to return to the top of the Pac-12. Five-star St. John Bosco (Bellflower, Calif.) prospect Matayo Uiagalelei would be a major addition to this class. He’s been on campus several times since USC hired Riley, but prepare for an extremely competitive recruiting battle down the stretch, with Oregon defensive coordinator Tosh Lupoi leading the charge for the Ducks.

Another position where USC needs to upgrade its talent level. At outside linebacker, four-star prospect Malik Bryant is a target, as is three-star Braylen Shelby, along with a few other national prospects.

Three-star Lincoln (San Diego, Calif.) prospect David Peevy is a bit raw, but he’s been on campus a few times and is a target for USC. On Wednesday, the Trojans added Utah transfer Carson Tabaracci, who will be a freshman this fall. We’ll see whether that has any impact on how many players they add at the position this cycle.

The Trojans have already landed two defensive back commitments in this cycle: four-star prospect Braxton Myers and three-star safety Christian Pierce. USC has recruited this position intensely the past two seasons and will have a very young group in the secondary this fall.

Four-star prospects Christian Gray and Micah Tease and three-star cornerback Maliki Crawford are all slated to take visits this summer. Crawford is a bit raw, but the 6-foot-3, 180-pound corner has an intriguing frame.

Four-star Serra (Gardena, Calif.) cornerback Rodrick Pleasant is turning heads right now with his speed on the track, and he is being recruited by USC, but I don’t know whether the Trojans’ pursuit of the local product is as intense as some on social media and message boards want or are making it out to be.

And as a reminder, this is the first class without the initial counter limit of 25, so the only restriction USC faces will be the 85-man scholarship limit. Strategies such as sticking to certain numbers per position group for each class may be getting thrown out the window now.

The Trojans have been creative with their roster rebuild under Riley, and the summer should provide a key window into how he approaches the final six-plus months of this cycle.

Is Aspen busy in the summer?

The secret about Aspen summer may be out because the most popular weeks (like Fourth of July) are very busy. While the crowds offer a vibrant ambiance to downtown Aspen, it becomes a little more difficult to get a dinner reservation or a seat on the Maroon Bells shuttle during peak summer weeks.

What are some s words for summer?

What are the top 10 recruiting classes?

Texas Ax26amp;M Extends Lead on No.

What modification targets a protein for degradation by the proteasome?

Ubiquitination involves the covalent modification of a lysine residue of the proteins targeted for degradation which is mediated by the action of three enzymes.

Who has the top recruiting class for 2021?

Alabama Pulls in No.

Who has the top recruiting class in 2022?

WHO recommended the setting up of a National Research Foundation?

Who came up with the city too busy to hate?

As we continued digging, we found the the phrase was originally coined by Mayor Hartsfield in 1959 and touted during the course of the relatively successful desegregation of 4 area high schools in the fall of 1961.

What are the top 3 summer activities?

What Are Your Top 10 Summer Activities?

Has USC ever had a black head football coach?

Williams became the first Black head coach in USC's football history. On September 18, 2021, Williams made his head coaching debut and led the Trojans to a 45-14 victory over Washington State. The Trojans went 3-7 under Williams during the program's worst season in 30 years.