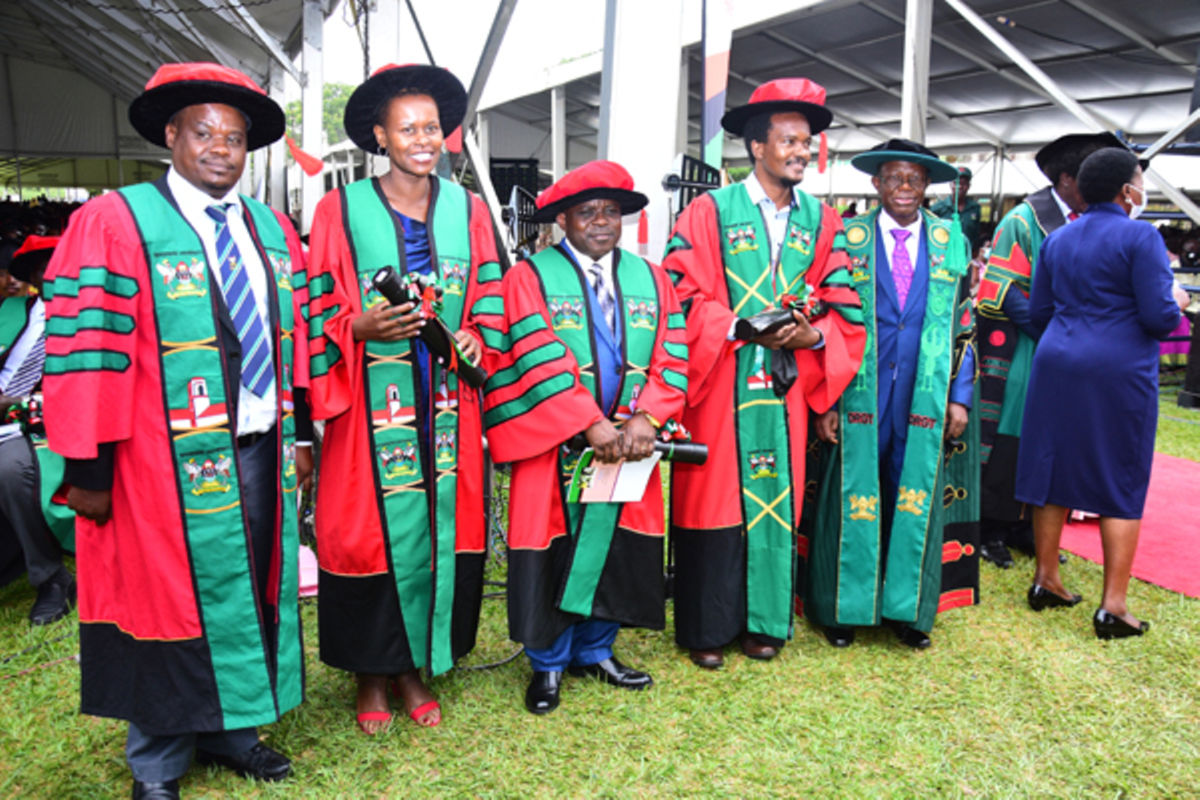 Makerere University will today hold its fourth session of the 72nd  graduation ceremony. More than 12,000 students are set to graduate and of these 100 will be graduating with doctorate degrees. In this article, Amos Ngwomoya profiles some of the high academic achievers.

Topic: Role of blood lead on the anemia status of malaria-infected children.

Their interaction during anemia development is strong and significant. Further, blood lead complicates the management of anemia disease and this could account for the high anemia prevalence of 52 percent among Uganda’s children.

Topic: Self-employment among the Youth in Uganda

Mr Kusemererwa investigated self-employment among the youth in Uganda using a multi-theoretical approach. Specifically, he focused on youth who have finished university and Tertiary education. Using a cross-sectional research design, he established that social capital, learning behaviour, initiative conduct and business self-efficacy do matter in self-employment among the youth.

He further established that business self-efficacy plays a partial mediating role in the relationship between social capital, learning behaviour, and initiative conduct in self-employment among the youth.

Eng Lwanyaga designed a process that selectively extracts salt from the brines of Lake Katwe coupled with a techno-economic analysis to foster commercial exploitation of the Salt Lake.  Through thermodynamic modelling, the study revealed that the mineral precipitation sequence mainly started with sulfate followed by chlorides and lastly carbonates with halite as the most abundant mineral.

His study further revealed that the salt pan should be as shallow as practically possible with an optimal depth of 0.1 m.

This model can be used by stakeholders such as the Office of the Prime Minister (OPM), the Ministry of Disaster  Preparedness and Refugees and local authorities to predict ground deformation as a precursor to landslides. This study was funded by the German Academic Exchange Service (DAAD) and supervised by Prof Moses Musinguzi and Dr John Richard Otukei.

Such barriers arise from the fact that stakeholders manage information using different policies and interfaces while at the same time describing data using different vocabularies and conceptualisations.

As a solution, the study adopts the use of patterns (best practices) as building blocks for interoperable architectures that address semantic barriers in line with Findable, Accessible, Interoperable and Reusable (FAIR) principles.

MrMugumbu Ismail developed a Localised Geometrical Alignment Technique (LGAT) for Updating Geo-spatial databases.  The innovative technique uses differences between corresponding objects so that only the changed parts are updated than copying entire objects between geodatabases.

This helps to minimise geometrical errors emanating from openings or overlaps of objects. This technique will facilitate efficient data update within the Uganda national spatial data infrastructures. It will also exploit the potential presented by the Internet computing paradigm in terms of data sharing, utilisation of volunteered geographic information, and lead to more use of spatial information in decision-making

ALSO READ: We will use research to serve our country

A blend of three approaches to language policy and planning (LPP); the Historical-structural model, the neo-classical model and language management theory (LMT). A narrative technique enabled the collection of both qualitative and quantitative data. Findings revealed that Kiswahili growth has been dependent on numerous language policies stretching from the pre, during and postcolonial epochs.

Constant shift in cultural and political leadership meant that whoever held power determined the language policies that favoured their leadership ideology.

Topic: A comparative analysis of land ownership and land conflicts in post-conflict areas of Luwero and Amuru  Districts, Uganda: A gender perspective

Ms Atwagala analysed the effects of landownership and land conflicts on gender perspectives in post-conflict areas of Luwero and Amuru Districts in Uganda. The findings show that the nature and causes of land conflicts have evolved, transforming from being local to becoming international. Actors and conflicts have become more sophisticated and complex to identify and analyse, respectively.

Mr Balikoowa explored the experiences and perspectives of primary school children regarding gender-based violence in and around schools and its impact on their schooling; in Uganda’s Busoga Sub-region.  Using a sociocultural approach, Balikoowa adopted a multimethod design through which he involved 450 male and female school children from 10 to 14 years in participatory visual activities; including draw-and-talk.

Topic: Myth and mythmaking in the narratives about Mwalimu Julius Nyerere among the Banyakyusa.

Mr Fredeo studied the recreation of Nyerere’s personal life and political career in  Banyakyusa myths. The study offers an alternative understanding of Nyerere’s life and history as perceived by local people. Using oral history interviews and content analysis, Banyakyusa myths which carry their culture, voices, beliefs, and perceptions of Nyerere were recorded.

The myths were interpreted based on Banyakyusa traditional beliefs and their life experiences.with their interests, value system, and skills, thereby compromising the outcome expectations.

COLLEGE OF HUMANITIES AND SOCIAL SCIENCES

Topic: Career Stereotypes and aspiration as predictors of students’ independence in career choice at education transitional levels in Uganda

This was motivated by the continued challenges that impact on students’ independence in career choice and the extent to which career decisions are based on the available facts.  This has led to students taking up careers that are not in line with their interests, value system, and skills, thereby compromising the outcome expectations.

Overall, the results revealed that reliance on personal independence and career choice facts, is decreased by the prevailing career stereotypes, across the education transitional levels.

Topic: The representation of women in selected plays of Euripides and selected Ghanaian playwrights.

Ms Antwiwaa employed feminist and postcolonial theories to interrogate the representation of women in selected classical Euripidean plays and selected Ghanaian playwrights to examine the ‘universalist’ view that the Classics are models for others to learn from.

The research questions the hegemonic elevation of the classical/western values to examine African experiences. The study reveals that in terms of gender representations, the Classical Greek, through Euripides’ writings, does not provide examples for the Akan (Ghanaian/African) societies.

The study recommends that African scholars need to adopt Afrocentric epistemology to examine African experiences in order to shift and balance the centres of knowledge production and circulation.

What are the main flavor profiles of Brazil?

Meat and Carbs. Perhaps the most well-known Brazilian staple is meat, especially those that come from churrascarias (grills): sizzling cuts of beef, some lined generously with fat, carved by waiters right at the table. ... Native Fruits and Vegetables. ... Bahian Specialties. ... Coffee Break.

Is PhD in New Zealand free?

Fees and fundingnn Unlike the UK and other countries, New Zealand doesn't charge higher fees to international PhD students.

Is PhD free in New Zealand?

Fees and fundingnn Unlike the UK and other countries, New Zealand doesn't charge higher fees to international PhD students.

Who are graduates of Quantico?

The crossword clue Quantico graduates. with 7 letters was last seen on the January 01, 1958. We think the likely answer to this clue is MARINES.

What is the rank of Makerere University?

*A New Zealand government funding scheme enables the University of Auckland to offer PhD study to international students for the same tuition fees as New Zealand PhD students. To be eligible, students must reside in New Zealand for the duration of their doctoral programme.

How much is PhD in New Zealand?

When did JFK write profiles in courage?

Profiles in Courage is a 1956 volume of short biographies describing acts of bravery and integrity by eight United States Senators. Then-Senator John F. Kennedy won the Pulitzer Prize for the work.

Can I have 2 Express Entry profiles?

No. You may only have one profile at a time. This is set out in Canada's immigration law. Creating more than one profile will not give you a better chance at being invited or allow you to be invited under a different program.

Can you deploy profiles with change sets?

Yes, they can be deployed via Change sets or Ant scripts, but neither option works all that well. Accordingly, many teams manage their Profiles and Permission Sets manually.