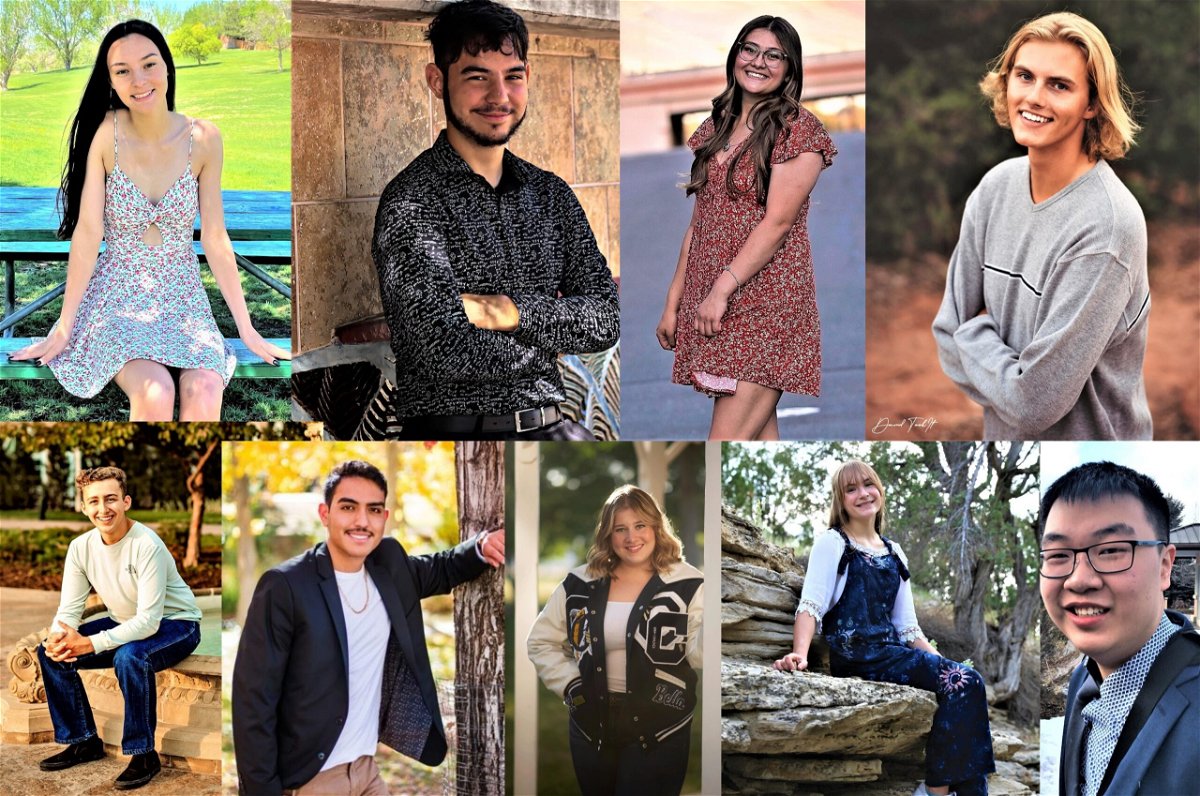 Graduations for Pueblo D60 begin Thursday and last through Saturday. There is a smorgasbord of remarkable graduates worth highlighting.

Aly Ross is a Centennial Bulldog and Hurliman Scholar who is graduating as a junior! She’s already holding down two jobs, one being a Certified Nursing Assistant. Aly plans to attend UC Denver majoring in Biochemistry.

Hayden Hall is a South Colt and Hurliman Scholar. He’s in the music program, student president, soccer team captain, and a runner. He placed top eight at State in the National History Day competition. He is going to Rice University in Houston to study political science and economics.

Paige Flores is graduating from Centennial as a Hurliman Scholar. A marching, concert and jazz band star, a varsity cheerleader, and she has also fundraised more than $16,000 for Relay For Life. Paige is going to the University of Kansas to study music therapy.

Adam Chavez is graduating from Pueblo East as a Hurlman Scholar. Adam received the Masonic Junior Achievement Award and a College Board Recognition Award. He’s graduating with a coveted International Baccalaureate diploma. He will attend the University of Alaska Southeast in Juneau.

Isabella Polito is a Central grad who was captain of the girls swim team. She was in Student Council, FBLA, Biomedical Pathway, NHS, among a long list of other clubs. She’s donated her time to help several parts of her community as well, including the Pueblo Rescue Mission and the Pueblo Zoo. Isabella is going to UC Denver to study biology, hoping to gain a pharmacy career.

Nadia Jackson is graduating from Centennial. She won last year’s Masonic Junior Achievement Award; she owns seven academic and athletic letters, was Head Girl for the Girls Cabinet, and was a four-time national qualifier in FBLA as chapter president. Nadia is off to Colorado College to study environmental science.

And finally, we have Centennial’s Andrew Zhang, who earned the Gates Scholarship, a full-ride scholarship that goes to only 300 students across the whole country. Andrew is a national qualifier in speech and debate, a three-time DECA state qualifier, and a district officer in FBLA who won a state championship twice and qualified for nationals this year. He’s going to Stanford to study computer science.

Do you know a remarkable human getting ready to graduate high school? Email us! [email protected]

Colorado State University--Pueblo is ranked #87 in Regional Universities West. Schools are ranked according to their performance across a set of widely accepted indicators of excellence.

Who is the Governor of Pueblo CO?

PUEBLO – Mayor of Pueblo Nick Gradisar shared his enthusiasm for the announcement on Friday, Feb. 25 from Governor Jared Polis amidst the COVID-19 pandemic with Colorado's Next Chapter: Our Roadmap to Moving... Read on...

What is the remarkable day of aviation history?

On May 21, 1927, Charles Lindbergh claimed his spot in aviation history when he landed in Paris, France, after a 33.5-hour flight from New York, becoming the first person in the world to complete a solo and nonstop transatlantic flight. At 10:24 p.m. local time, Lindbergh guided his plane, the Spirit of St.

Who is the Pueblo Mayor?

Pueblo Mayor Nick Gradisar spoke about crime, COVID-19 challenges and the local economy during a video State of the City address Monday.

How much does the mayor of Pueblo make?

What are West Point grads called?

Students are officers-in-training and are referred to as "cadets" or collectively as the "United States Corps of Cadets" (USCC). The Army fully funds tuition for cadets in exchange for an active duty service obligation upon graduation.n...nUnited States Military Academy.Significant datesAdded to NRHP15 October 1966Designated NHL19 December 1960

How much is the remarkable Futures scholarship?

Every year through the Remarkable Futures™ Scholarship initiative, Chick-fil-A offers two scholarship opportunities — the True Inspiration™ Scholarship ($25,000) and the Leadership Scholarship ($1,000 or $2,500) — to Team Members who work at a franchised, company-owned and/or affiliated restaurant.

What percentage of college grads work in their field?

For most, it's a ticket to their first major career milestone. And great news: many students are reaping the benefits of their academic success to find their way into their first jobs! College graduates ages 25 to 34 boast an employment rate of 86%, based on a 2017 study by the National Center for Education Statistics.