You are here: Home › West Side News & Notes 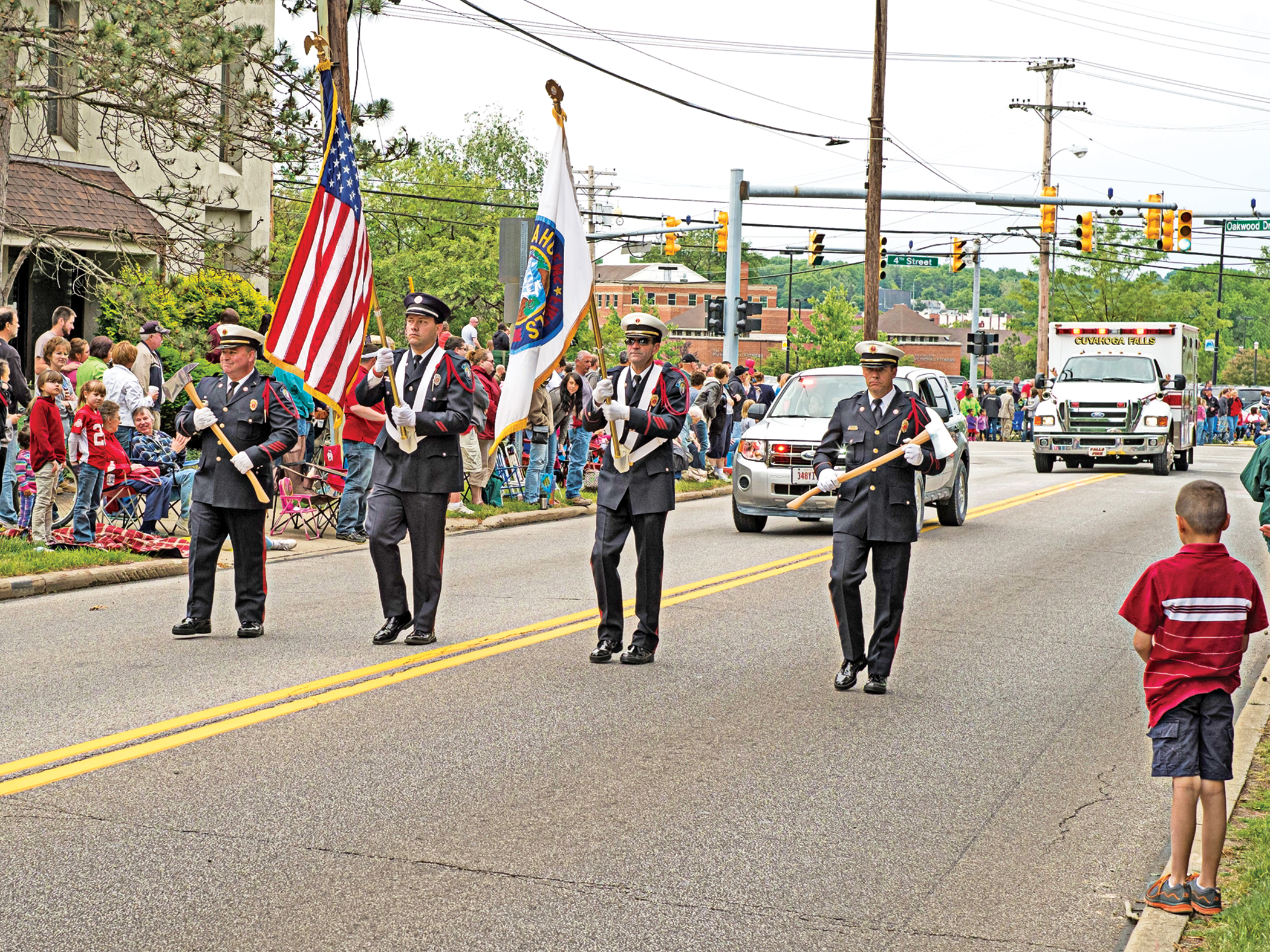 RICHFIELD — Richfield Village Council discussed May 17 the possibility of events and construction projects coexisting.
Village officials stated work in the center of the village will include the construction of Richfield Brewing Co. microbrewery and restaurant on Grant Street, the installation of water lines on West Streetsboro and Broadview roads and putting a parking lot at Grant Street Extension, with a sidewalk extension to Giant Eagle on Broadview Road. Officials added construction on the water mains is scheduled from Aug. 2 to Sept. 29, with pavement restoration scheduled for Oct. 3 to Nov. 10.
Planned village events include: the vintage car show on the village green July 30, as well as the Community Day Parade Aug. 12, but going up Mill and North High streets instead of continuing on West Streetsboro Road.
Council President Bobbie Beshara said the village would wait to see what conditions would look like before finalizing the route.
In other news, Planning and Zoning Director Brian Frantz announced the village has received a donation of 39 trees from Winar Connection in celebration of 40 years of business. Frantz said Winar also will plant one tree on its property.
In other business:
• Fire Chief George Seifert said the village was able to save $1,700 by replacing the seals on the bottom of the fire department’s garage doors.
• Finance Director Sandy Turk reported the village has spent $1 million-plus more than it has collected through May 12.
• Frantz said the Planning Commission gave final plan approval for the Richfield Brewing Co. project.
Also, Council approved the following:
√ the appointment of William Mehalik to the Cemetery Board;
√ referring to the Planning Commission two proposed text amendments of the “Yard Requirements” section of the village’s Planning and Zoning Code (PZC);
√ consenting to the widening of Interstate 77 from state Route 21 to the Ohio Turnpike;
√ amending the “Fences, Walls and Hedges” section of the PZC; and
√ an agreement with MetLife for dental insurance for full-time village employees.
Council’s next regular meeting is set for June 7 at 6:30 p.m. at Town Hall, located at 4410 W. Streetsboro Road.

CUYAHOGA FALLS — The Woodridge Local Schools Board of Education was updated on the five-year forecast May 17.
Treasurer Tom Morehouse gave a presentation regarding the forecast, which the board approved during the meeting. He said the forecast has a positive cash balance at the end of each year, which is dependent on voters renewing two levies — a 7.04-mill operating levy in 2023 and a 9.27-mill operating levy in 2024. He added that other factors that could impact the forecast include Summit County’s appraisal update in 2023, the Fair School Funding Plan and costs continuing to rise due to inflation.
Morehouse said the district is seeing an increase in casino revenue, and insurance changes have helped the district, even with the increases over the years, with insurance costs at 5 percent below where they were four years ago.
According to the forecast, the district’s cash balance is expected to be $14.5 million at the end of fiscal year 2022 and then decrease to $8.4 million by the end of fiscal year 2026, if voters approve both renewal levies.
In other business, the board approved:
• a three-year agreement with the Woodridge Education Association, effective Aug. 1 through July 31, 2025;
• the list of names in the Woodridge High School (WHS) graduating class;
• the 2022-23 student handbooks for all schools;
• setting lunch prices for the 2022-23 school year at: $3 at the elementary school, $3.25 at the middle school and $3.50 at WHS; and
• a builder’s risk insurance policy and agreement for the high school stadium improvements.
At the end of the meeting, the board moved into executive session to discuss personnel matters, with no action taken afterward.
The next board meeting is set for June 21 at 6 p.m. in the library at Woodridge High School, 4440 Quick Road. The meetings are livestreamed, with a link available at www.woodridge.k12.oh.us.

CUYAHOGA FALLS — The 90th Cuyahoga Falls Memorial Day Parade and Ceremony will take place May 30. The parade will step off at 9 a.m. from the corner of Portage Trail and Lillis Drive and travel east on Portage Trail to Fourth street and then make a left onto Oakwood Drive to end at Oakwood Cemetery, located at 2420 Oakwood Drive.
Local Boy Scouts will collect the following items along the route prior to the parade to donate to the Freedom House, a transitional housing facility for veterans: canned and dry goods, personal care items such soaps, shaving cream, deodorants and toothpaste and toothbrushes, as well as cash.
A memorial ceremony at 11 a.m. at the cemetery will include guest speakers Danial French, of the U.S. Army 1st Bn/75th INF Ranger C Co., and Howard Michael McClain. This year’s host post is the V.F.W. Post 1062 in Cuyahoga Falls.

AKRON — Akron Public Schools (APS) has named National Inventors Hall of Fame® Science, Technology, Engineering and Mathematics (STEM) Middle School science teacher Christine Justiss as Teacher of the Year from a field of eight finalists.
According to APS officials, the selection process for the award began with school-building-level teacher of the year awards made this winter.
Justiss has been with APS for 22 years and at the STEM school downtown for the past 13. Prior to that, she was a teacher at Innes Middle School. She graduated from APS, earned a bachelor’s degree from The University of Akron and returned to APS to teach. She also earned a master’s from UA.
“My goal as an educator is to inspire all of my learners of diverse backgrounds to succeed,” said Justiss in her application.” I believe teaching is the greatest calling and that we have the responsibility to prepare today’s students for tomorrow’s jobs that may not even exist today.”
“Teachers have learned new technology, have become gifted at delivering their lessons in varying formats and have done it all with grace and efficiency,” said Superintendent Christine Fowler Mack. “We really can never thank teachers enough for the difference they make to our scholars, their families and the very future of this community.”
The other finalists for APS Teacher of the Year are:
• Elementary Division — Allonna Stefanik, Helen Arnold Community Learning Center (CLC); Monique Swain, I PROMISE School; Christy Uhren, Voris CLC; and Lori Whipple, King CLC; and
• Secondary Division — Megan Houk, Miller South School for the Visual and Performing Arts; Lucrecia Rogers, Firestone CLC; and Christopher Sims, Kenmore-Garfield High School.
Also during the evening, the APS Marilyn Parks Achievement Award — given to a “life-long learner and one who stays connected to students and contributes to the wider community of educators,” according to information provided by APS — was bestowed upon Claudia Grimes (King CLC), Brian Johnson (Findley CLC) and Jill Regenos (Firestone CLC).
In addition, APS awarded the David W. James Award to Ellet CLC’s Hannah Couch.
To be considered for that award, a teacher must have: taught for the district for fewer than 18 months; be an advocate for excellence through equity; use data effectively; monitor and adjust learning conditions; demonstrate culturally responsive teaching practices; and be respected by students.

BATH — Bath Volunteers for Service (BVS), formally chartered in 1958, began by creating a library that eventually became the Fairlawn-Bath Library.
In 1978, the service organization launched its signature fundraiser — the annual BVS Bath Tour of Distinctive Homes — which has raised thousands of dollars each year allocated in support of many local nonprofit organizations that align with the same ideals of service of BVS. This year’s tour will be virtual and take place June 1-12, with tickets available at www.bvshometour.org.
In 2016, BVS added the BVS Trivia and Tacos fall fundraising event (Nov. 12) and continues to sponsor the annual Bath Horse Show each summer (this year set for Aug. 13-14), a 75-year tradition, in partnership with the Bath Pony Club and Bath Community Fund of the Akron Community Foundation.
This past year, BVS donated over $41,000 back to the community thanks to these efforts and other activities, according to BVS officials. This includes almost $33,000 to area service organizations through a formal grant process; $700 to local civic associations; $2,250 to the Revere Local School District in scholarships and grants; over $3,000 for the Salvation Army and CASA program (pajamas for children); and nearly $1,000 for a “calming corner” in Revere High School’s counseling office.
For more about BVS, visit bathvolunteersforservice.com.

Please support Leader Publications as we continue to provide the community with local news.

Click the link below for more information on our 2020 Voluntary Subscription Drive!

Related Questions and Answer about "West Side News & Notes"

Where is the west side in West Side Story?

West Side Story was originally set in the neighborhood of Lincoln Square, or San Juan Hill, on the Upper West Side of Manhattan. Until the 1950s, the neighborhood was predominantly African-American and Afro-Caribbean. Though it suffered from poverty and crime, it was also a cultural hotspot, especially for music.

Is Toronto the west side?

Toronto, Montreal and Ottawa are not on the East Coast. They are in what is considered Central Canada and very far from the Atlantic ocean. The East coast are the provinces of Nova Scotia, New Brunswick, Prince Edward Island, Newfoundland x26amp; Labrador.

Is Upper East Side or Upper West Side nicer?

The two areas are neck and neck in terms of pricing, but currently, the East Side is slightly cheaper than the West. Historically, the Upper East Side has been slightly more prestigious and affluent.

Is Upper East Side richer than Upper West Side?

Which is better Upper West Side or Upper East Side?

Historically, the Upper East Side has been slightly more prestigious and affluent. The West Side tends to cater more to professionals who work in Midtown or other commercial areas in the city who need easy access to transportation.

West Side Story is available to stream on Disney+ on March 2, with the one-hour special Something's Coming: West Side Story – A Special Edition of 20/20 is already on the streamer.

Is West Side Story a flop?

In addition to having to incentivize audiences to attend despite the problematic past of its male lead, West Side Story dealt with a myriad of other factors that led to its weak box office debut. The film grossed only $10.6 million, while needing $300 million to break even.

Is Philadelphia on the West Side?

Is the Upper West Side rich?

Like the Upper East Side opposite Central Park, the Upper West Side is an affluent, primarily residential area with many of its residents working in commercial areas of Midtown and Lower Manhattan.

Is the Upper West Side posh?

It is the most affluent neighborhood in New York City. Also upscale and mostly residential, the Upper West Side neighborhood is known as one of Manhattan's premier cultural and intellectual hubs, popular with young professionals for its thriving nightlife. 2.