You are here: Home › Modis Talk Peps Up Biz Leaders Of Tomorrow 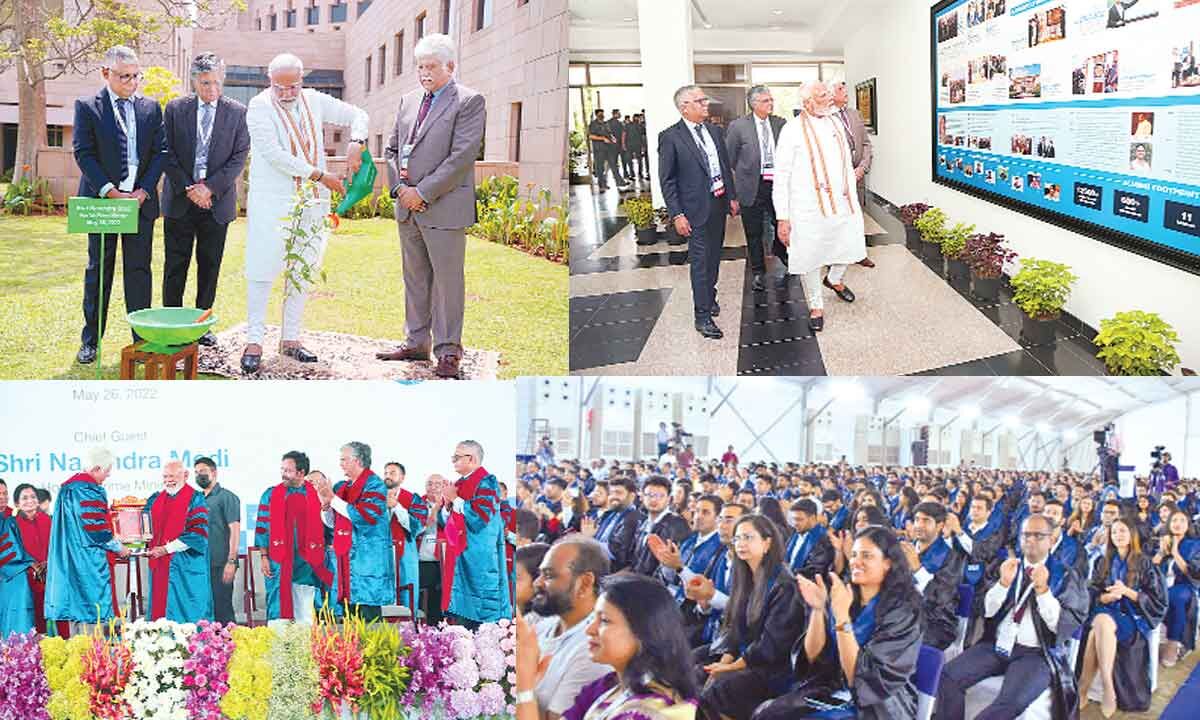 Hyderabad: Follow the mantra of "reform, perform and transform," while making business policies in your careers. Be part and play a key role in scripting the story of making a self-reliant India," Prime Minister Narendra Modi appealed to the graduating business and management professionals of the Indian School of Business (ISB) here on Thursday.

He said, "I would like to ask you to link your personal goals with the goals of the country" and "To make India future-ready, we have to ensure that India becomes self-reliant. You the business professionals have a big role in this," he said

Modi lauded the efforts of the faculty, parents and students of the ISB who have scripted a success story of ISB's 20 years of the journey since it was dedicated to the nation by former Prime Minister Atal Bihari Vajpayee to the country in 2001.

More than 50,000 executives have passed out from ISB, he said. The Prime Minister noted that India at present is the fastest growing economy in the group of G-20 countries. "In the case of Smartphone Data Consumer, India is at number one. If we look at the number of internet users, then India is second in the world. India is also second in the world in the Global Retail Index.

He said India has world's third largest start up ecosystem consumer market. India is emerging as a major centre of growth today," PM Modi said. "Last year, the highest ever recorded FDI came into India. Today the world is realising that India means business," he added. Attacking the opposition, PM Modi said that the need for reform was always felt in the country, but there was always a lack of political will.

"Due to the continuous political instability in the last three decades, the country has seen a lack of political will for a long time. Because of this the country stayed away from reforms and from taking big decisions." Modi also stressed on the need to give more opportunities to small businesses and connecting them with the new local and global markets, Modi said.

Prime Minister Narendra Modi's presence at the ISB graduation ceremony of 2022 and the 20th Foundation Day is a unique privilege and a momentous occasion. We are living in volatile and uncertain times globally with multiple challenges like environment, geopolitical. Besides, the emerging technology, a double-edged sword, on the one hand is bringing positive changes and on the other, it is changing the very character of the way we work. The ISB graduates are entering a new landscape of a challenging business.

The new generation of business leaders is no longer the ones who run great companies, but good companies. It is not only about serving shareholders, but also all stakeholders. Companies that are not only commercially sound, but also caring about the communities within which they operate.

The new generation of leaders is not only competitive and smart but also sensitive. While dedicating the ISB to nation in 2001, former Prime Minister Atal Bihari Vajpayee called it "Rastra Dakshina' and set a bar for the ISB. In the following two decades of ISB, it has consistently been first in India and the top business school in Asia and world rankings.

A great many ISB alumni have been entrepreneurs, started startups, and played a key role in making the unicorns. That apart, many have been contributing to the private and public sectors. The achievements of ISB might not have been possible without the support from the Centre and the State governments over the years.

The Prime Minister envisioned the idea of 'Amruth Kal' on the occasion of India's 75th year of Independence to make the country strong, developed and self-reliant. The ISB is ready to contribute to building solutions for the Atma Nirbhar Bharat. The passing out graduates should play their part of the role in the grand vision of building a self-reliant India.

"It is gratifying to witness the contribution made by ISB across various spheres in such a short span of time. In the 20 years since its inception, ISB has emerged as an internationally top-ranked business school and the impact ISB has had so far is remarkable.

In its 21st year, we rededicate ourselves in realising the vision of being a research-driven, independent management institution that grooms future leaders for India and the world."

"This one year of study at the Indian School of Business has been a fabulous experience filled with tremendous learning and also fun. The peer group and faculty at ISB were exceptional. I am taking very important life lessons both from in-class and outside class interactions.

The one year was a roller coaster ride; I am feeling extremely happy to end it on such a high by receiving the scholar of excellence award from the Prime Minister of India - Narendra Modi Ji.

This is actually an extremely proud moment for both me and my family. I am extremely thankful and grateful to my parents, in-laws and husband who have supported me at every step and made this possible I would have not achieved this without their constant support and motivation! I am joining Mckinsey and Company as an Associate in July and plan to grow in the firm to make a partner."

I graduated from IIT, Bombay, with a B Tech. Earlier, I had worked with multiple employers in the financial sector with the Government of Maharashtra relating to infrastructure finance. It was wonderful and mesmerising to receive an award from the Prime Minister of the country. The ISB experience and its diversity of friends and bondings were enriching.

In my next assignment, I am going to join Bain & Company as a consultant in finance. I will be exposed to diverse sectors and issues. It will allow me to contribute to the larger agenda of the country's development. However, I do have an idea to become an entrepreneur in the long run.

"It is for the first time that the Prime Minister is addressing the graduation ceremony in the Indian School of Business (ISB).When the ISB was dedicated to the nation by former Prime Minister Atal Bihari Vajpayee, it was intended to be an independent institution dedicated to producing business leaders for the country and the world.

The ISB stood among the top business schools in the world and first in the country. It also topped in terms of per capita research activity. The ISB is trying to solve India-centric problems with rigorous research in economics, finance, marketing, and operations with a global level scholarship in management.

The accomplishments of ISB faculty showcase the world-beating research being carried out in India by scholars of ISB. As the ISB is entering its third decade, it wanted to be a resource to the country and transformation which is the central piece of the vision of the Prime Minister.

The institution has also partnered with the Department of Science and Technology and others. With the strengths of ISB faculty and distinguished leadership it has and the network of international universities. The ISB is well prepared to play its part role in building a self-reliant India.

What is the cost of Modis plane?

The state-of-the-art aircraft were brought around the cost of over Rs 4,500 crore. A special 'Air India One' aircraft built in America for the Prime Minister and President of the country arrived in India on October 1, 2020.Sept 23, 2021

How does MODIS Aqua work?

As the Aqua and Terra satellites orbit the earth, their MODIS instruments collect imagery of the same area on Earth approximately three hours apart. The entire Earth's surface is imaged every one to two days, and the sensors work in tandem to optimize cloud-free surface viewing.

What are the primary applications of MODIS images?

The Moderate Resolution Imaging Spectroradiometer (MODIS) is a key instrument onboard the Earth Observing System (EOS) Terra and Aqua platforms, designed to monitor the Earth's atmosphere, ocean, and land surface with a set of visible, NIR, MIR, and thermal channels.

What is MODIS imagery used for?

MODIS helps scientists determine the amount of water vapor in a column of the atmosphere and the vertical distribution of temperature and water vapor—measurements crucial to understanding Earth's climate system.

What is MODIS data used for?

MODIS helps scientists determine the amount of water vapor in a column of the atmosphere and the vertical distribution of temperature and water vapor—measurements crucial to understanding Earth's climate system.

A transformational leadership style creates a vision and inspires subordinates to strive beyond required expectations, whereas transactional leadership focuses more on extrinsic motivation for the performance of job tasks (39,44).

What is Talk of the Sound?

Founded in 2008, Talk of the Sound is the leading independent hyper-local news organization in New York. @robertcox. is the Publisher and Managing Editor.

Who are the leaders of Lebanon?

Who are the leaders of Congress?

Who are the leaders of Mauritius?