You are here: Home › In Mongolia, VCU professor emeritus is teaching data journalism 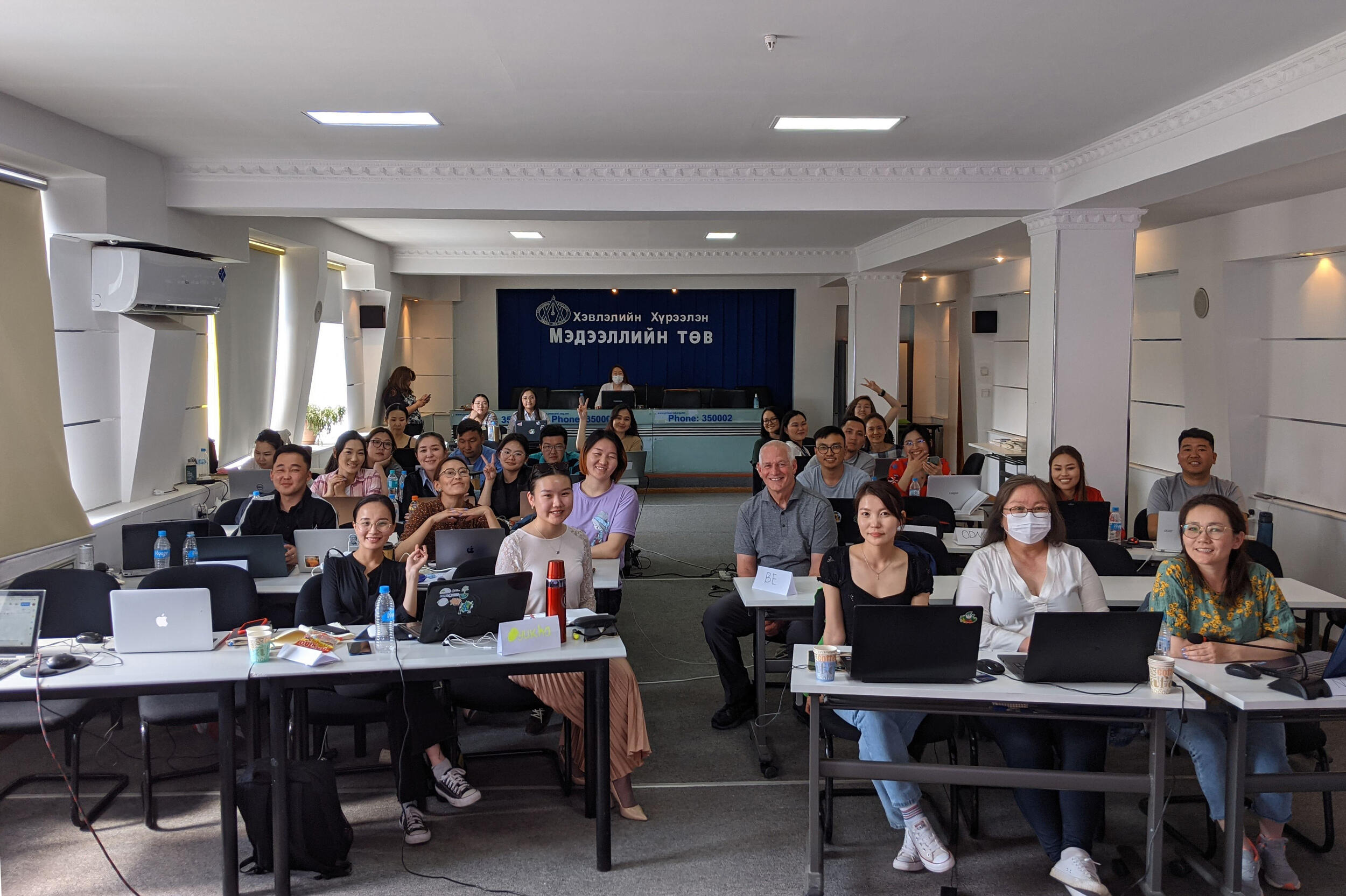 Jeff South, an associate professor emeritus who retired from Virginia Commonwealth University in 2020, is serving as a Fulbright specialist in Mongolia, where he is training journalists in data journalism and fact checking.

South, who taught journalism for 23 years as a faculty member of the Richard T. Robertson School of Media and Culture in the College of Humanities and Sciences, will spend six weeks working with the Nest Center for Journalism Innovation and Development, a nonprofit organization that seeks to improve journalism and media literacy in Mongolia.

More than 200 journalists from across the Central Asian country have registered for South’s three-day workshops on how to find, analyze and visualize data and integrate it into news stories.

“Data journalism isn’t a substitute for ‘shoe-leather’ reporting — going to public meetings or protests, interviewing government officials, combing through documents for newsworthy information and talking to everyday people,” South said. “But data journalism can complement traditional journalistic practices. Reporters can use their data analysis to support or challenge the narrative that officials are presenting, for example, and to uncover otherwise untold stories. Furthermore, data visualizations are an effective — even fun — way to present complex numerical information.”

As an extension of the workshops, South is helping to assemble teams of journalists to work on data-driven stories, exploring possible topics such as corruption, air pollution and mining operations.

“I’ll work with each group on the data and other reporting and help translate their stories into English,” he said. “We hope to publish the articles on U.S.-based or international news platforms.”

South also will work with the Mongolian Fact-Checking Center, which was established by the Nest Center to counter misinformation and disinformation online and in the media.

“I’ll share my tips on how to establish the provenance and truthfulness of social media postings, photos and other online information and how to investigate sketchy websites and digital accounts,” he said. “Nestled between Russia and China, Mongolia is bombarded with propaganda and conspiracy theories (like the false assertion that the U.S. had biolabs in Ukraine). I hope to help the Mongolian Fact-Checking Center do an even better job of separating fact from fiction.”

Mongolia, a country of about 3 million people spread over an area the size of Alaska, has a media system of around 500 print, online and broadcast news outlets.

“It’s been an eye-opener on a robust, freewheeling media system — very different from the government-controlled systems in China and Russia, the countries that surround Mongolia,” South said. “Freedom House and Reporters Without Borders, two groups that monitor press freedoms throughout the world, both rate the Mongolian media as free and pluralistic. Journalists here aren’t jailed or killed for their reporting, as they are in some countries. Much of the journalism I’ve seen in Mongolia is top-notch — compelling, hard-hitting stories that shine a light on society and aim for truth and accuracy.”

At the same time, however, media in Mongolia face challenges. Many of the small news outlets are mouthpieces for business or political interests, many news outlets are struggling to survive financially, and journalists must contend with low pay and heavy workloads. Still, South said, there’s a vibrant community of reporters and editors committed to speaking truth to power.

He added that Mongolia has a high literacy rate, more than 99%.

“Mongolia is a society that greatly respects reading, learning and the printed word,” he said. “Last weekend, there was a book festival in Ulaanbaatar, the country’s capital, where I am living. Publishers were invited to set up tents to display, promote and sell their books. In this nation of 3 million people, there were hundreds of tents erected on the city’s main square, featuring everything from textbooks and comic books to serious fiction and nonfiction, young adult novels and coffee-table books of photography.”

South’s project, which will conclude June 23, is funded by the Fulbright Specialist Program, a program of the U.S. Department of State that sends about 400 U.S. academics and established professionals to other countries to share their expertise. In 2014, South served as a Fulbright scholar teaching at a university in China.

Is it emeritus professor or Professor Emeritus?

Always use the contruction "professor emeritus" NOT "emeritus professor." The title should be in lowercase; avoid constructions with the title before the name. John Williams was named professor emeritus of mathamatics in 1980. Emeritus and emeriti are the preferred singular and plural terms of professors of any gender.

Always use the contruction "professor emeritus" NOT "emeritus professor." The title should be in lowercase; avoid constructions with the title before the name. John Williams was named professor emeritus of mathamatics in 1980. Emeritus and emeriti are the preferred singular and plural terms of professors of any gender.

Which is correct emeritus professor or professor emeritus?

Is there a difference between emeritus professor and professor emeritus?

Persons holding professorial titles modified by “adjunct,” “courtesy,” or “visiting” cannot be granted emeritus status. A professor who does not seek or is not qualified or approved for emeritus status is considered a “retired academic.” Professors emeriti remain voting members of the University Faculty.

Does VCU have a journalism major?

The Richard T. Robertson School of Media and Culture offers a Journalism Concentration as part of its B.S. degree in Mass Communications to prepare students for careers in the news media.

What is professor emeritus status?

Emeritus or emerita is an honorary title for professors who want to stay active in scholarship following retirement.

What is distinguished professor emeritus?

The title of Professor Emeritus shall be automatically conferred upon all full professors who have honorably retired after a period of service in the institution of more than ten years.

Is an emeritus professor retired?

An emeritus is a retired college professor or minister. When a professor stops teaching, she might be given the title of emeritus, which basically means she can still be remembered as a successful professor.

What is an emeritus professor?

Emeritus or emerita is an honorary title for professors who want to stay active in scholarship following retirement.