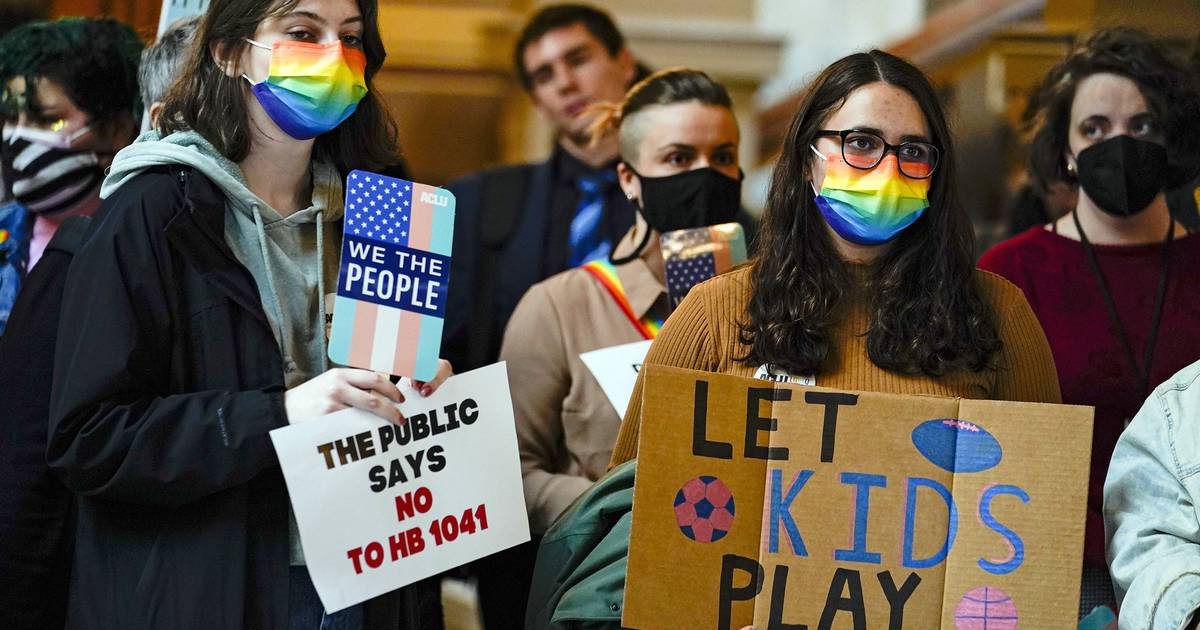 FILE - People gather to protest against HB1041, a bill to ban transgender women and girls from participating in school sports that match their gender identity, during a rally at the Statehouse in Indianapolis, Wednesday, Feb. 9, 2022. The Republican-dominated Indiana Legislature is poised on Tuesday. May 24, 2022, to override the GOP governor's veto of a bill banning transgender females from competing in girls school sports, a step that would have Indiana join more than a dozen other states adopting similar laws in the past two years. (AP Photo/Michael Conroy File) (Michael Conroy / AP)

Northwest Indiana transgender and women’s rights advocates expressed their disappointment with the legislature’s vote to override a veto of a bill that would ban transgender girls from playing on a girls sport or team in K-12 schools.

Gov. Eric Holcomb vetoed the bill in March, saying it did not provide a consistent policy for what he called “fairness in K-12 sports.” He also pointed to the IHSAA’s policy on transgender athletes.

Republican sponsors of the bill maintained Tuesday it is needed to protect the integrity of female sports and opportunities for girls to gain college athletic scholarship but could not point out any instances in the state of transgender athletes outperforming other girls.

The American Civil Liberties Union of Indiana immediately filed a lawsuit challenging the law Tuesday afternoon in the U.S. District Court for the Southern District of Indiana. Similar laws have already been blocked or temporarily enjoined in other states.

The lawsuit was filed on behalf of A.M., a 10-year-old girl who plays on her school’s all-girls softball team. The new law, which would go into effect July 1, 2022, would deny A.M. the right to rejoin her team because she is a transgender girl.

The Northwest Indiana National Organization for Women “condemns” Tuesday’s vote “by the ultra conservative members of the supermajority,” according to a statement from the organization.

“No child should ever have to go through what the legislature declared was acceptable behavior against trans girls,” according to the statement.

Elected officials “have a duty to protect the most vulnerable members of our society against the abuses of the powerful and those driven by hate and bigotry,” according to the statement.

The legislature “denied vulnerable children their rights and protections” while also putting “every school sports program, and therefore every student athlete, at risk,” according to the statement.

“(T)he conservative supermajority in our state legislature, as a body, failed in that duty and became the abusers when they voted to override Gov. Holcomb’s veto,” the statement reads. “The children impacted are collateral damage in their cruel crusade.”

The organization’s core principle is LGBTQIA+ equality, and its vision is “a society where we are all safe, valued and equal,” according to the statement.

“To those children and youth, their families, and our fellow Hoosiers, we can say unequivocally that the legislature is wrong. As an organization and individuals of all genders, we will work to break down the barriers of bigotry and fear, build community, and fight for the equal protections and acceptance that LGBTQIA+ individuals deserve, until that vision is achieved. You can count on it,” according to the statement.

Simon Anderson Schelling, chair of the LGTBQ Outreach of Porter County, said he watched the House session Tuesday and was messaging with friends as the legislature voted to override the veto.

“I was sad. I was disappointed,” Schelling said. “I wasn’t surprised. I was hopeful that there would be people who would step up and realize that this law is about bullying. That’s what we’re doing. We’re bullying youth.”

But, Schelling said he is grateful the ACLU of Indiana has filed a lawsuit “quickly and that they were prepared for the worst case scenario.” He’s now focused on how to continue helping transgender youth, Schelling said.

Given the veto override vote, Schelling said he has a “it is needed” feeling about the work he does.

“My hope is that someday there is not a need for an organization that has to create safe space for LGTBQ youth and people in general because it’s already there. Like, you don’t need an organization to create (a safe space) it just exists, but unfortunately that’s not where we’re at,” Schelling said.

His concern, Schelling said, is that the law will translate to children being scrutinized for wanting to play sports. Schelling said he would share words of encouragement with trans youth in this moment.

“Even though it does not seem like government officials are for you, there is a community that supports you and is there for you every step of the way,” Schelling said.

What is transgender bill in India?

The Transgender Persons (Protection of Rights) Act, 2019 is an act of the Parliament of India with the objective to provide for protection of rights of transgender people, their welfare, and other related matters.

Transgender people are people whose gender identity is different from the gender they were thought to be at birth. “Trans” is often used as shorthand for transgender. When we're born, a doctor usually says that we're male or female based on what our bodies look like.

Is there transgender medicine?

Puberty blockers are only one option available to transgender youth before other, more serious interventions. Taking testosterone, estrogen or other drugs can produce changes in a person's body that help them look more masculine, feminine or nonbinary – whichever it is the person wants.

What are the rights of transgender students at school?

All students have the right to be treated equally and to be free from bullying, harassment, and discrimination, regardless of gender identity or gender expression.

How do you deal with a transgender employee?

How much does it cost to transgender?

Sexual reassignment surgery (SRS, or GRS for 'gender') for trans women and trans femme people costs upwards of around $30,000, which many will find a daunting check to write, but the benefits will completely outweigh the costs. Other surgeries such as top surgery will cost between $9000 to $10,000.

Do the Olympics allow transgender?

Athletes who transitioned from female to male were allowed to compete without restriction. These guidelines were in effect for the 2016 Rio Olympics, although no openly transgender athletes competed. In 2021, the IOC approved Laurel Hubbard, a trans woman, to compete in the 2020 Summer Olympics in weightlifting.

This legislation, the first of its kind in the United States, prohibits transgender athletes from competing in sports against athletes of the other biological sex. In April 2020, the ACLU and the Legal Voice filed a lawsuit, Hecox v. Little, arguing that this law violates the US Constitution and Title IX.

What is a transgender student?

To keep the term relevant to schools, however, let us consider the transgender population as the students who self-identify and perceive themselves to be a gender that does not align with their natal sex.

What type doctor is transgender?