You are here: Home › LDS Church President spoke out about US gun laws; what does the faith say now about firearms

LDS Church President spoke out about US gun laws; what does the faith say now about firearms? 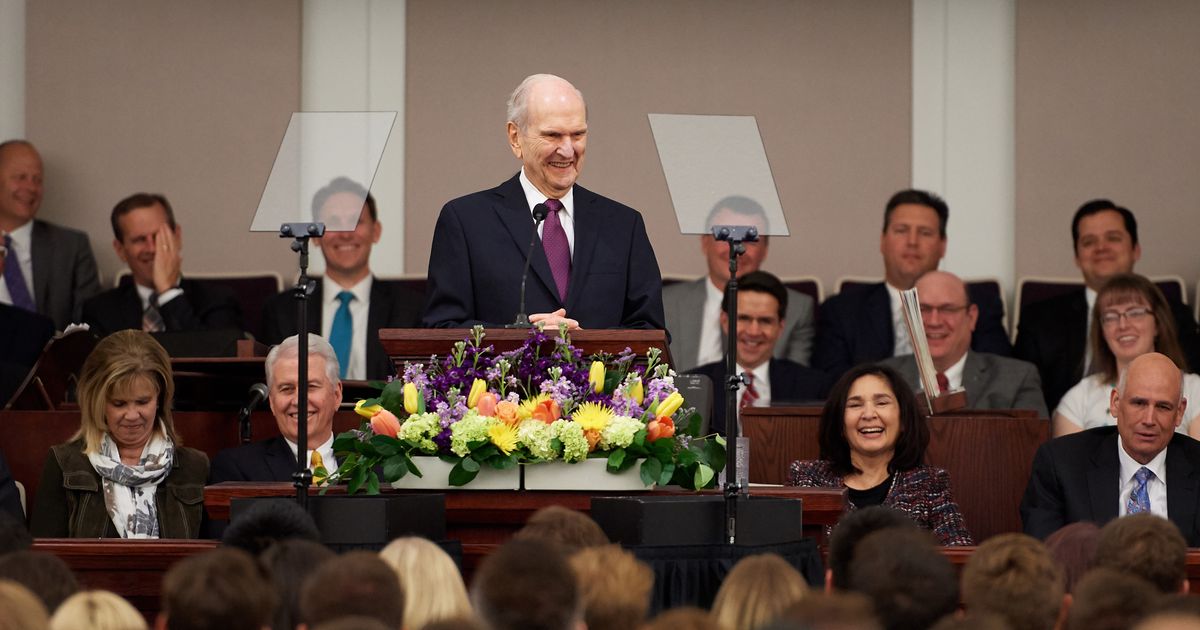 (The Church of Jesus Christ of Latter-day Saints) Church President Russell M. Nelson addresses young adults at a fireside in Las Vegas on Feb. 17, 2018. During his speech, he referenced U.S. gun laws in the wake of the Parkland, Fla., school shooting.

The Mormon Land newsletter is The Salt Lake Tribune’s weekly highlight reel of developments in and about The Church of Jesus Christ of Latter-day Saints. Support us on Patreon and get exclusive access to Tribune subscriber-only religion content, extended newsletters, podcast transcripts and more.

The church and gun control

In the aftermath of this week’s horrific mass shooting at Robb Elementary School in Uvalde, Texas, we look back at what President Russell M. Nelson said soon after the deadly attack at Marjory Stoneman Douglas High School in Parkland, Fla.

Barely a month after taking the church’s helm in early 2018, Nelson lamented U.S. laws — or the lack thereof — governing guns.

“How could God allow things like that to happen?” he told a congregation of Latter-day Saint millennials in Las Vegas. “Well, God allows us to have our agency, and men have passed laws that allow guns to go to people who shouldn’t have them.”

To be clear, the Utah-based faith has taken no public position on gun control legislation — nor did Nelson’s remarks spell out a specific stance on any measures.

A couple of years later, apostle Jeffrey R. Holland touched on the topic in the April 2020 General Conference, soon after the COVID-19 pandemic struck, when he urged members to commit to building a better world.

“May we hope for schools where students are taught,” he pleaded, “not terrified they will be shot.”

The church issued no official statement after the Texas rampage.

It did, however, reinforce in 2019 its ban on “guns” — unless carried by law enforcement officers — in its meetinghouses and temples. The current General Handbook continues that prohibition, stating that “firearms and other lethal weapons [including concealed weapons] are not allowed on church property.”

Plenty of political, civic and religious leaders have been offering their “thoughts and prayers” in the wake of the Texas tragedy. That’s a practice Nelson endorses.

“I have a firm belief that praying for those in need is pleasing to God,” he wrote recently on Instagram, adding that people also should ask what they can do to “minister, lift, love and support those in need” in bringing about much good in the world.

In that vein, By Common Consent blogger Sam Brunson offered a starting point for reining in the prevalence of firearms and gun violence in U.S. society. He suggested government:

• Impose a property tax on guns. “Guns are too cheap,” argued Brunson, a tax law professor at Loyola University Chicago. “...Tax dollars would be earmarked specifically to reimburse victims of gun violence for their costs. That way, gun owners would internalize the costs of gun ownership and society would be reimbursed for (some of) the costs they suffered.”

• Require gun owners to buy liability insurance. “An insurance requirement would force gun owners to bear something approaching the cost of their gun ownership,” Brunson explains, “while compensating society for the harms the guns impose.”

My colleague Peggy Fletcher Stack recently returned from a multinational tour of the Middle East.

In a special bonus “Mormon Land” podcast for our Patreon supporters, she discusses her trip, including her visit to the United Arab Emirates and the site of the church’s first planned temple in the Middle East, along with her trek to the Holy Land and her dinner at the home of Israel’s president.

Join Patreon now to hear that episode and to receive our extended newsletter and transcripts of our “Mormon Land” podcasts.

Church history made outside of Utah

(Photo courtesy of Richard Bushman) Latter-day Saint scholar Richard Bushman says it may be easier for historians to write about Mormon history from outside of Utah.

Richard Bushman, author of “Joseph Smith: Rough Stone Rolling” and the dean of Mormon historians, says it may be easier for Latter-day Saint scholars who don’t live in the Beehive State to write about the church.

“The trouble is, if you live in Utah, you write, aware of general authorities looking over your shoulder. You can’t do that,” Bushman tells Wheat & Tares blogger Rick Bennett in a “Gospel Tangents” podcast. “You can’t write to please the general authorities. You’ve got to write what you think is true. It’s just very hard to do in Utah, because there’s such a presence.”

The key to staying true to the scholarship and to the faith when addressing sensitive topics, says Bushman, an emeritus history professor at Columbia University, is to “keep your heart pure, and let your mind run free.”

“Purge out any desire to tweak the church, to sort of correct the church,” he says, “and just desire to really say what you believe is true.”

It doesn’t hurt, Bushman adds in the podcast, to accept church callings as well.

“The fact that I was a bishop and stake president, and now I’m a patriarch, sort of reassures people that my heart is in the right place,” he says. “Because I think that’s what the church leaders are most interested in. Are you really loyal to the church?”

• On this week’s “Mormon Land,” students at Brigham Young University who call themselves the Black Menaces discuss their mission to raise awareness about racism and other challenges facing the church and its flagship school.

Listen to the podcast.

• Tribune data columnist Andy Larsen waded into the world of Latter-day Saint membership stats and noticed that the top 12 states in terms of growth the past two years were “red” ones (voting for Donald Trump in 2020) and eight of the bottom 10, whose rolls actually decreased, were “blue” (opting for Joe Biden).

Read about that and what else he found in his column.

• The FX/Hulu miniseries “Under the Banner of Heaven” has drawn cheers and sneers for its depiction of Mormonism and the characters in the script. But separating fact from fiction can prove difficult, especially since, as screenwriter Dustin Lance Black concedes, no “biopic” is 100% reality.

• A debate has arisen between some Latter-day Saint feminists and some LGBTQ advocates about the nature of Heavenly Mother.

Subscribe here to get these and additional newsletter items free in your inbox each week.

Filed Under: religion law
Tagged: can you get hope scholarship back

Related Questions and Answer about "LDS Church President spoke out about US gun laws; what does the faith say now about firearms?"

What does revelations say about the church?

What does US Constitution say about asylum?

In accordance with international law, the United States considers asylum candidates on the basis of persecution or fear they will be persecuted on account of race, religion, nationality, and/or membership in a particular social group or political opinion.

What does the Apostle Paul say about the church?

What does the church say about the death penalty?

On August 2, 2018, the Vatican announced that it had formally changed the official Catechism of the Catholic Church on the death penalty, calling capital punishment “an attack on the inviolability and dignity of the person” and deeming it “inadmissible” in all cases.

What does the church of Christ say about Easter?

Easter is the day that Christians believe that Christ rose from the dead, bringing eternal life to followers. Christ's resurrection, following his crucifixion on what is known as Good Friday, is a time of rejoicing and rebirth.

What does the Bible say about church membership KJV?

What does the US Constitution say about state constitutions?

Article VI, Paragraph 2 of the U.S. Constitution is commonly referred to as the Supremacy Clause. It establishes that the federal constitution, and federal law generally, take precedence over state laws, and even state constitutions.

What does the Catholic Church say about the Knights Templar?

On January 13, 1128, Pope Honorius II grants a papal sanction to the military order known as the Knights Templar, declaring it to be an army of God.

What does the Bible say about deacons in the church?

In verses 8-10, Paul says, "Deacons likewise must be men of dignity, not double-tongued or addicted to much wine or fond of sordid gain, but holding to the mystery of the faith with a conscience.

What does the church say about preferential option for the poor?

They explained, "As followers of Christ, we are challenged to make a fundamental 'option for the poor'—to speak for the voiceless, to defend the defenseless, to assess lifestyles, policies and social institutions in terms of their impact on the poor" [5].