You are here: Home › TSU Announces 100 Scholarships for MNPS Students With New “Trailblazing to TSU” Initiative 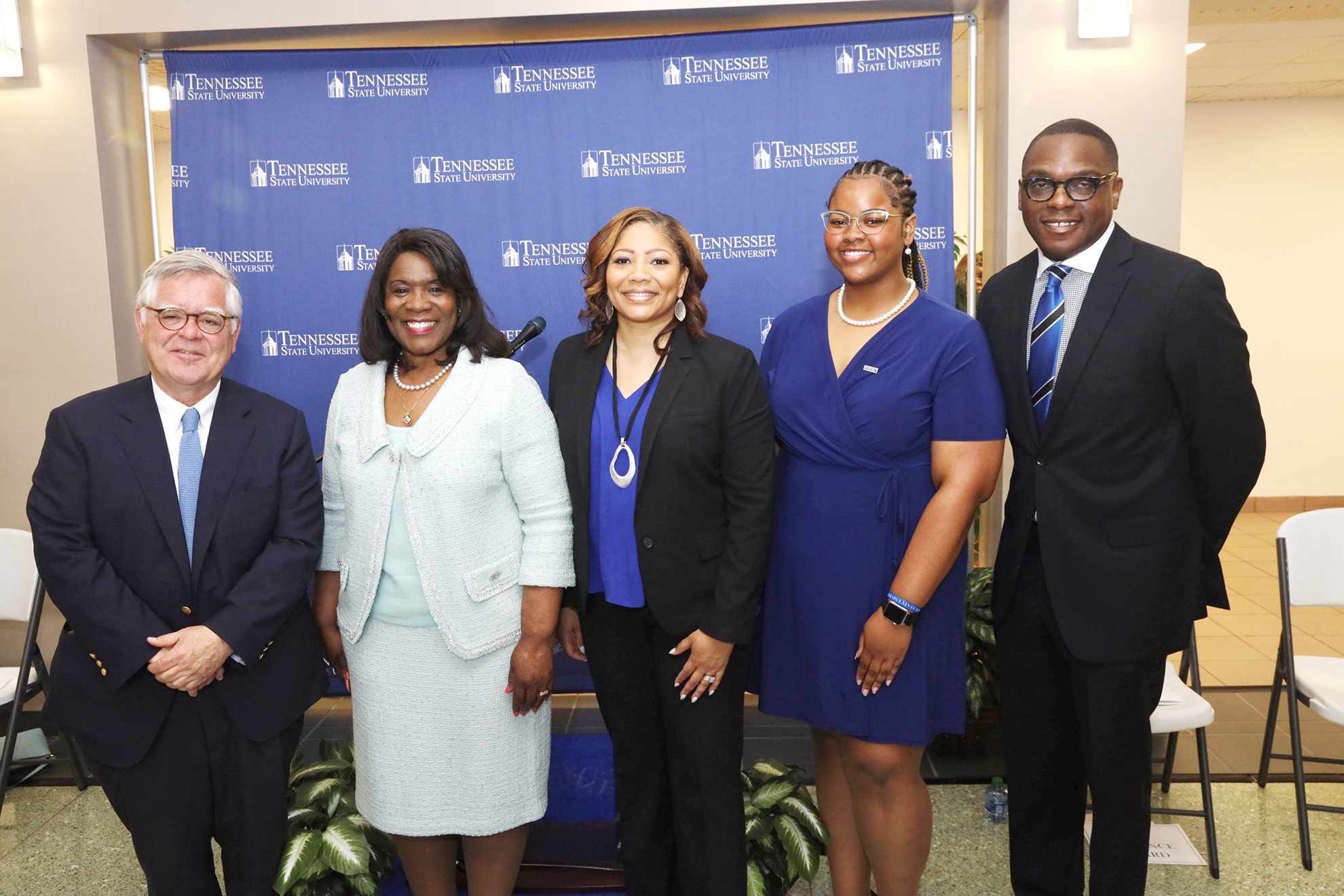 NASHVILLE, TN (TSU News Service) — Tennessee State University and the Metro Nashville Public Schools have announced a new partnership in which the university will offer 100 MNPS students full scholarships beginning the fall 2023 academic year. TSU President Glenda Glover was joined by Nashville Mayor John Cooper and MNPS officials at a press conference on the TSU campus Wednesday to launch “Trailblazing to TSU.”  The new initiative will provide scholarship recipients the opportunity to be educated and trained for career opportunities in four high-demand content areas in the Colleges of Business, Education, Engineering and Health Sciences.

The partnership will also include early college experiences in collaboration with MNPS, such as college visits, mentorship, guidance, and counseling support. The full-ride scholarship will cover four years of tuition and fees for participating students.

“As an institution of higher learning with deep roots in our community, we are elated to provide this opportunity for 100 Metro Schools graduates to be TSU Trailblazers, earning a degree and treasured life experiences that will help them to succeed in life and careers beyond our campus,” said TSU President Glenda Glover. “MNPS students are fortunate to have such a strong advocate in Dr. Battle, who has worked with me and my team to develop this initiative in a way that will maximize the benefits to the students and our respective organizations.”

Trailblazing to TSU, which is one of many partnerships TSU has had with MNPS in the past, is part of a broader initiative of Dr. Adrienne Battle, director of Metro Schools, to create the “University of MNPS,” which aims to develop, strengthen, or expand partnerships between Metro Schools and colleges and universities in the Nashville and Middle Tennessee area.

“Elevating our relationship with TSU has been a key focus of mine in developing the University of MNPS initiative, because this institution means so much to so many in our community and among the many teachers and administrators who have used TSU’s College of Education as a springboard to success – including myself,” said Battle, who earned three graduate degrees at TSU, including a doctorate. “This generous offer to provide a no-cost education to 100 of our students will help more of our graduates to live their dreams and be on the pathway to great-paying, highly sought careers in Nashville and beyond.”

The Trailblazing to TSU scholarships will each be individually named after a leader in the struggle for civil rights in America, in recognition of the trail blazed by individuals who fought for their rights, opportunity, and equality in America. To ensure the success of students participating in the program, TSU will assign a mentor to each scholarship recipient to guide them in their collegiate journey and to strengthen their chances for success in life beyond college.

“Investing in our children’s future through education is among our most important responsibilities as a community, and I’m thrilled that TSU has stepped up to the plate in a big way for our Metro students,” said Mayor Cooper. “It’s a fitting tribute that these 100 scholarships will be named for civil rights leaders as living testaments to their role as powerful examples for our future leaders. I’m grateful to President Glover for partnering with us on this initiative and for everything she does for Nashville, as well as to Dr. Battle for her continued leadership and service to Metro Schools.”

Terence Izzard, TSU’s associate vice president for enrollment management, whose office worked along with MNPS officials to bring Trailblazing to TSU to fruition, said TSU’s commitment to MNPS has been longstanding.

“This partnership with MNPS is not a new partnership with TSU in terms of our commitment to MNPS,” Izzard said. “Trailblazing to TSU is an intentional partnership as we launch into 2023, our next class that will be coming in next year.  Dr. Battle, her team and our team have been meeting for weeks to arrive at this day. I want to thank everyone for your hard work.”

Izzard announced that as part of the relationship TSU has with Metro schools, the university has already committed 71 scholarships to MNPS graduates to attend TSU in the fall.

Erin Armstrong, a sophomore biology major and an MNPS graduate, who introduced President Glover, said coming to TSU was the best decision she made. She invited current MNPS students to take full advantage of the scholarship program.

“President Glover’s philosophy of University and Student First and shows in everything she does,” said Armstrong, who is a member of the TSU Honors College. ”So, to all MNPS students desirous of furthering their education after high school at TSU, you can expect a great campus life with caring professors and everything to help you succeed.”

Students who are interested in applying to this exciting program should visit mnps.admissions.tnstate.edu.

What did TSU used to be called?

How can I watch TSU football?

Where can I watch TSU football?

How many faculties are in TSU?

TSU has six faculties: Law, Economics and Business, Humanities, Medicine, Social and Political Sciences, Exact and Natural Sciences, and the International School of Economics at Tbilisi State University as an autonomous graduate school of economics.

How do I send my transcripts to TSU?

Students with dual credits must request to have the college transcript be sent to TSU.

How hard is it to get in Tsu?

The school has a 66% acceptance rate ranking it #27 in Texas for lowest rate of acceptance. Last year, 4,438 out of 6,687 applicants were admitted making TSU a moderately competitive school to get into with a strong chance of acceptance if you meet the requirements.

Is TSU having a homecoming this year?

October 24-31, 2021nn Homecoming at Tennessee State University is unlike any other and this year's celebration is expected to be one of our biggest ever. We recognize that each year is special but this year promises to be even more extraordinary.

Where does the TSU parade start 2021?

Entry fees will NOT be refunded for any reason, including inclement weather. Please retain these instructions and bring them to your assigned mandatory parade meeting on Monday, September 21, 2021 in the Floyd Payne Campus Center room 209 (the Form).

How do I get a full ride scholarship to TSU?

To qualify for this scholarship, you must meet the following requirements:

Does Harvard give 100 scholarships to International students?

Because Harvard is committed to affordability, our scholarships are designed to cover 100% of your demonstrated financial need. Here is our process: First we determine your award by establishing your parent contribution. Then we factor in student employment and any outside awards you've received.